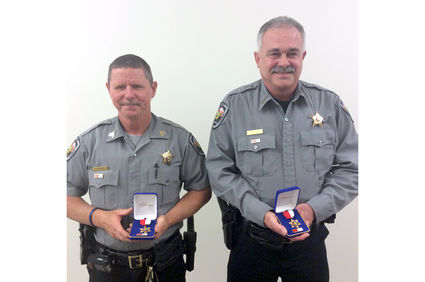 On August 13, 2015 while headed towards the Sheriff's Office from a call Sgt. Steve Adams and Deputy Jeff Bert were flagged down by a man in pick-up truck. They followed the subject in the pick-up truck to an address on Co. Rd. 85. As they exited their vehicles to see what the issue was someone ran out of the residence saying there was a "drowning baby" inside. Sgt. Adams and Deputy Bert went inside the residence where they located a female with an infant that was unresponsive and not breathing. Deputy Bert immediately gave the infant back blows which caused the infant to spit up a small amount of water. After the back blows were performed, Sgt. Adams started continuous chest compressions on the infant. After a minute or two the infant began breathing on its own. Moments later an off duty Prattville Fire Medic arrived and the care of the infant was turned over to him. Sgt. Adams and Deputy Bert conducted traffic control on Co Rd 85 for the arrival and departure of Life Flight. To the best of our know-ledge the infant made a full recovery.

There is no doubt that the good LORD placed Sgt. Steve Adams and Deputy Jeff Bert in the right place at the right time to assist this family in there time of need.

That is why I would like to present Sgt. Stephen Adams and Deputy James Bert with the Life Saving Medal and Commendation Bar.