Christmas for the Homeless 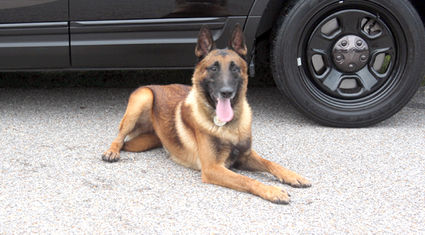 We would like to thank everyone for the generosity in donating to the homeless. We have been overwhelmed with all the donations over and beyond the items requested. Thank you again to all those that gave to this worthy cause so that even the less fortunate could have Christmas!

Deputy Krzeminski has been working with his K-9 partner Aros for about 2 years. Aros is a Belgian Malinois, and is a dual purpose K-9, meaning he is highly trained in explosive detection and Patrol.

Corporal Talley has been working with his K-9 partner Blade for about 2 years. Blade is a 2 year old Belgian Malinois, he is certified in Patrol and Narcotics detection. Both officers enjoy playing ball and spending time together.

Corporal Henry has been working with his K-9 partner Doerak since 2013. Doerak is a three year old, 85 lb., Belgian Malinois. He joined the Montgomery County Sheriff's Office in September of 2014. Doerak is certified in narcotics detection and apprehension, and has also been trained to track. Doerak enjoys playing with his handler. He dislikes fleeing criminals, and violent offenders.

Deputy Lucas has been working with his K-9 partner Hoss since 2013.

Hoss is a four year old Dutch Shepherd. He is certified in apprehension and narcotics detection. Hoss enjoys going to schools and interacting with the public. On his off days, Hoss likes to lay under shade trees with his Kong toy.

Corporal Heath has been working with is K-9 partner Ipo since 2014. Ipo is a 3 year old Belgian Malinois. He is certified in narcotics and apprehension. Ipo along with his handler, have been patrolling Montgomery County since January 2014. Ipo is a loveable, laid back K-9 until the command is given for him to be otherwise.

Deputy Morrow has been working with his K-9 partner Johnny since 2014. Johnny is a 4 year old Dutch Shepherd. Johnny is a certified narcotics and patrol. Johnny enjoys working as well as tracking down and playing with his toys.

Vested Interest in K9s, Inc. is a 501c (3) charity located in East Taunton, MA whose mission is to provide bullet and stab protective vests and other assistance to dogs of law enforcement and related agencies throughout the United States. The non-profit was established in 2009 to assist law enforcement agencies with this potentially lifesaving body armor for their four-legged K9 officers. Since its inception, Vested Interest in K9s, Inc. provided over 1,600 protective vests, in 49 states, through private and corporate donations, at a cost of over 1.5 million dollars. All vests are custom made in the USA by Armor Express in Central Lake, MI.

The program is open to dogs actively employed in the U.S. with law enforcement or related agencies who are certified and at least 20 months of age. New K9 graduates, as well as K9s with expired vests, are eligible to participate.

The suggested donation to provide one protective vest for law enforcement K9 is $1,050.00. Each vest has a value between $1,795 – $2,234 and a five-year warranty, and an average weight of 4-5 lbs.. There are an estimated 30,000 law enforcement K9s throughout the United States. For more information or to learn about volunteer opportunities, please call 508-824-6978. Vested Interest in K9s, Inc. provides information, lists events, and accepts tax-deductible donations of any denomination at http://www.vik9s.org or mailed to P.O. Box 9 East Taunton, MA 02718.