"When the righteous are in authority, the people rejoice; But when the wicked beareth rule. the people mourn." Proverbs 29:2 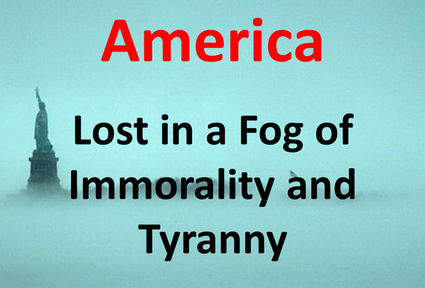 Liberty is in dire peril today in America. What was birthed as a "land of the free and the home of the brave" has become a nation of ever increasing power taken from the local and state governments to the national government. This is absolutely against the intent of the United States Constitution. The transfer of power has decreased our individual liberty and ability to be self-governed. The end result of such political power is always TYRANNY.

This article today is to appeal to God's people, His Remnant, to take back the reigns of local and state government, to come against Socialism and Communism, which have advanced to the detriment of your and my liberty.

"The powers not delegated to the United States by the Constitution, nor prohibited by it to the States, are reserved to the States respectively, or to the people." The Tenth Amendment to the U.S. Constitution.

Our Founding Fathers had a transcendent (surpassing others) view of civil government, and how, under a Biblical concept of law and justice, mankind could live under Biblical law in a civil and just government. Our Constitution is the greatest example of a government document designed for that very purpose.

Our forefathers referred to our Creator as the "supreme and just Ruler of the Universe." Our Declaration of Independence stresses it as well, that we are endowed by our Creator with "inherent and inalienable rights; among these are life, liberty, and the pursuit of happiness."

Additionally, governments are to obtain their rights from "the consent of the governed." The "governed" were and are the citizens of 50 democratic republics, holding the power of the vote.

Understanding the sinful nature of mankind, the Founding Fathers warned about men with power desiring a government to destroy these ends of Life, Liberty, and Property. They warned that citizens must rise up to resist, alter, or abolish such efforts.

Because my life has been spent in Education, and Biblical Christianity, I have observed the dramatic changes in American Education, which have conditioned several generations to accept the "New World Order."

For the early centuries, American school children were taught true History. They read and reread how people came to America to search for religious freedom. They read the tearful stories of the American Revolution when those patriots fought a war to escape tyranny.

It has been nearly a century since true History was put aside in public schools and replaced with Social Studies. John Dewey's dream of Industrial Education has been realized and that has served to further divide the population into two classes of people. To concentrate on preparing the "socialized worker" for his station in life, the richness of the Old Liberal Arts Education had to be sacrificed. But without that education, how can Johnny and Mary ever learn about their past, and about the greatest experiment in government in all of human History? America's Christian Constitutional Republic was crafted with the Biblical teaching of man, law, government, and above all, personal Salvation by Grace alone.

Socialists cannot bear to have a government based on individual rights, with checks and balances such as were providentially put into our Constitution. No, today, their marxist view is that the individuals must be "absorbed" with the group: the work force.

Common Core and other socialist intent is to re-educate people to accept the New World Order. Another detriment in this intent is to weaken the Armed Forces and every aspect of our national defense.

I recently read of a teacher who had taught 35 years, in both public and private schools, who found that nearly all of the students believed a Marxist concept of "from each according to his abilities, to each according to his needs," and which they generally accepted without question. They were thoroughly brainwashed in Socialism when they arrived at his class. That teacher took that as a challenge to inform and to awaken them.

2016 is a critical year in America. Every vote will count as never before. The percentage of Americans voting in recent elections is abysmal. We must take this seriously and become active.

My studies with Francis Schaeffer in America and in Europe years ago, were life changing for me as an educator. He exposed the impact of the worldview shift taking place in Europe and America at a rapid pace. The new worldview shifted from a Christian worldview, to the idea that the final reality is impersonal matter, or energy shaped in its modern form by chance. No human being can even estimate the damage that Darwin's theory of Evolution has brought to the classrooms of America, and to generations living under such darkness.

The rejection of Biblical authority has been at the very basis of the worldview shift. Carl F. Henry wrote, "If modern culture is to escape the oblivion that has engulfed the earlier civilizations of man, the recovery of the will of the self-revealed God in the realm of justice and law is crucially imperative." (God, Revelation, and Authority. Vol 6)

The obvious answer is to be informed, to research and understand the past history and the current dangers, while turning to the Bible for guidance in how to impact the culture today. Pray for revival and let it begin with the willingness to become involved. Christian Education is essential to American Liberty. It is essential to the propagation of The Christian religion. Without that true American foundation existing, we will succumb to tyranny.

"The time has come that Christians must vote for honest men and take consistent ground in politics, or the Lord will curse them...God cannot sustain this free and blessed country, which we love and pray for, unless the Church will take right ground. Politics are a part of religion in such a country as this, and Christians must do their duty to the country as a part of their duty to God." Charles Finney

"He therefore is the truest friend to the liberty of his country who tries most to promote its virtue, and who, so far as his power and influence extend, will not suffer a man to be chosen into any office of power and trust who is not a wise and virtuous man...The sum of all is, if we would most truly enjoy this gift of Heaven, let us become a virtuous people." Samuel Adams

"It is impossible to mentally or socially enslave a Bible-reading people. The principles of the Bible are the groundwork of human freedom." Horace Greeley

"The family has always been the cornerstone of American society. Our families nurture, preserve, and pass on to each succeeding generation the values we share and cherish, values that are the foundation for our freedoms. In the family we learn our first lessons of God and man, love and discipline, rights and responsibilities.... Families maintain the spiritual strength of religious commitment among our people.... It is essential... that each of us remembers that the strength of our families is vital to the strength of our nation." President Ronald Reagan