The Origin of Liberty in Government Established by the U.S. Constitution 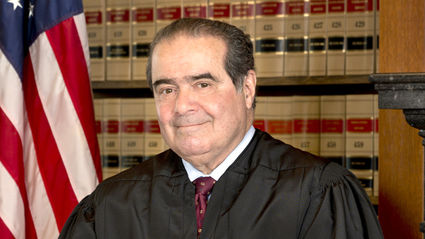 With the death of Justice Antonin Scalia, the court is now equally divided between the Constitutionalists and those who oppose traditional interpretation of our Law. With recent drastic changes in American culture, there are cases pending before the high court at the present time which could literally further destroy the moral absolutes in our culture. As of now, the court is equally divided between "right and left." There is great speculation about Justice Scalia's replacement on the bench.

Immigration and the aggressive Refugee Resettlement Movement is moving swiftly at the present time, and the case before the court could reverse a lower court ruling to delay the Obama plan.

Religious non-profits are seeking an exemption from the Affordable Care Act's mandate that employers must pay for the cost of collective bargaining, even if they object to the union demands.

Affirmative Action, long a hot topic in university admission programs that take race into consideration, will come under scrutiny by the court.

Perhaps the most controversial case challenging the Court will be the Abortion issue. Reproductive Rights have been front and center since 1992. The "rights of a woman and her own body" have clouded the issue of a "right to life." Will the Court place restrictions on physicians and facilities to protect that most fundamental right of all, which is Life?

The real issue is it all concerns the Constitution as the Supreme Rule of Law in America. While our citizens have enjoyed freedom and liberty since 1788, it has not always been so with any other people, in any other country, on any other continent on the globe. This is an amazing story.

Men tried to establish a government for centuries before 1788, but their experiments never produced freedom and liberty for the individual. The cycle moved from a mob, to a monarchy, sometimes to democracy, more often to tyranny, to autocracy, or feudalism. None brought the promise of " life, liberty, and the pursuit of happiness." No indeed, each one brought suffering, oppression, misery, and most often violence. Tyranny and military despotism crushed the hearts and ideals of men, and left them with no security. There was no regard, or even recognition of an individual's God-given "rights."

The English, more than any other people, understood their own history. They knew well the oppression of their kings, and preserved the Magna Carta in their hearts, while it was ignored and denied in the daily life of England's ruling classes.

We, as Americans, truly claim that the Magna Carta is the basis of American Liberty. Behind that parchment lies the history that you and I have enjoyed. The story of this history has been denied to generations in America's government schools since the early 1900's. This sad, but glorious history, belongs to every American as it relates to the long and relentless struggle by a brave and united people against the misrule of kings.

I have visited numerous times that meadow at Runnymede, on a little island in the River Thames, where King John of England was given the choice of a "pen or the sword." He chose the pen, and signed the Great Charter, rather than the sword which would cost his life. It was an admission of using arbitrary rule, and his acceptance of limited powers. In that meadow in June, the year 1215, they saw that Law was made Supreme in England.

For the first time in History, the Magna Carta provided the restraint of written law to apply to all men. This marked a decisive step toward what would become Constitutional Government in the future.

a. Their rights were clarified.

b. No one was to be dispossessed of his property except by due process of law, or by a judgment of his peers.

c. A trial by jury was assured, with the right of an appeal.

d. Fair taxation was assured by consent of the people's representatives.

That last provision will of course remind us of the slogan of the American Revolution: "No Taxation Without Representation."

The Great Charter established four fundamental principles into law that live today. They are:

1. A king must rule in accordance with the law and desires of his people.

2. Government is a contract, with each party accountable, and called to account.

4. The king has specific restrictions.

400 years later, King Charles I violated the ancient rights and principles of the Magna Carta. The people acted. On June 7, 1628, Parliament withheld money until Charles was forced to sign "The Petition of Rights."

Continuing to Ignore the "Rights" cost Charles his life on the headman's block in 1649, and the English monarchy was not restored until 1660.

Those principles in the "Petition of Rights" are a vital part of our United States Constitution:

1. Taxes are levied only with the consent of Parliament.

2. Troops are no longer boarded in private homes.

3. Martial Law cannot be declared in time of peace.

4. Citizens have the right of trial by jury of one's peers.

England lived another 28 years under the peace through the rule of law, until King James II attempted an absolute monarchy, which brought his abdication. The Revolution of 1688 settled the power of Parliament and English Law. Parliament elected William and Mary as rulers. Political liberty triumphed in England with the "The Bill of Rights " in 1689.

The influence and indeed the very principles in the "Bill of Rights" and "The Petition of Rights" are expressed in the first eight amendments to our United States Constitution.

In the 1600's, when these events were taking place in England, the founders of the American colonies followed their conscience to seek liberty elsewhere. It meant facing uncertainty, privation and sufferings, but they conquered a wilderness, and reached their goal of freedom and liberty in a New World.

The Founding Fathers of our nation knew their history, and learned the lessons of history. One of the greatest tragedies of our day is that recent generations of Americans do not know their own history. If they did, there would be a public outcry to protect Liberty in every public square, and in every voting booth.

The Founding Fathers learned History reading the writings of the men who fought for liberty. Among them were John Locke, William Blackstone, and the French philosopher, Baron de Montesquieu. Providentially used were the political sermons of John Witherspoon, Charles Wesley, George Whitefield, Samuel Davies, Jonathan Mayhewn and so many others.

John Locke was the leading philosopher of the Whig Party in England. His vision for a government was outlined in his Treaties of Government published in 1690. According to Locke, the "God given rights of man are "life, liberty, and property." To protect his God-given rights, man must form a community by a social contract. The ends of political society are to have a uniform interpretation of the law, to establish those rights given to the individual of "life, liberty, and property."

The first 8 Amendments to the Constitution set forth those rights, privileges, and immunities.

Baron de Montesquieu approved of the English system, but he added to it, something that has been dramatic and essential: The Separation of Powers.

Sir William Blackstone, in his Commentary of The Laws of England, analyzed and clearly set forth what would become the basis of American Law. Every signer of the Declaration of Independence, and those at the Constitutional Convention had internalized Blackstone's writing. Righteous law was a sacred trust to them, as it should be to us.

The writings and lives of James Madison, Thomas Jefferson, John Adams, and his son, John Quincy Adams, and so many others, verify their understanding and commitment to the Rule of Law. Locke and all the others mentioned above, vowed that these rights could not be deprived to any man, because they were given by God.

Could it be that any group of people have actually lived out such a faith and practice? After many decades of studying History and visiting Plymouth, Massachusetts so many times, I am still inspired by the lives and history of the Pilgrims. I have written about them before, and their Mayflower Compact.

No people have ever displayed more Christian courage and charity than this group of Christians seeking freedom of religion. Their faith and persistence saw them through every tragedy and every challenge. Their "Compact" written and signed aboard the Mayflower, was a political covenant in harmony with their religious doctrine which guided their relationships and their world view. Even in a wilderness, with a small group of people, law was necessary.

Under the American Constitution, the cause of human freedom has been served. Today, that document is in danger because it is no longer sacred in the hearts of many American citizens. Too many who are in elected offices do not revere this document. Its future in our land will determine our freedom and our liberties. It will determine our right to life, the expression of our thoughts and values, our freedom of religion, our rights of assembly, petition and action, and our property rights and civil liberty.

In my library, I have a recently republished book of Political Sermons of the American Founding Era, 1730-1805. It contains one thousand pages of these political sermons. Today, the pulpits of America are silent concerning our great God-given heritage of law, which is clearly based on God's Word.

For 30 years, Justice Antonin Scalia was faithful to his charge to protect our God given rights through faithful loyalty to the Constitution. His intellect, his brilliance and his personal faith shines through his faithfulness in the following words.

"It is of overwhelming importance ... who it is that rules me. Today's decree says that my Ruler, and the Ruler of 320 million Americans coast ­to­ coast, is a majority of the nine lawyers on the Supreme Court. ... This practice of constitutional revision by an unelected committee of nine, always accompanied ... by extravagant praise of liberty, robs the People of the most important liberty they asserted in the Declaration of Independence and won in the Revolution of 1776: the freedom to govern themselves." Obergefell v. Hodges.

"Except as limited by a constitutional prohibition agreed to by the People, the States are free to adopt whatever laws they like, even those that offend the esteemed Justices' 'reasoned judgment.' A system of government that makes the People subordinate to a committee of nine unelected lawyers does not deserve to be called a democracy. Obergefell v. Hodges.

"[T]he enshrinement of constitutional rights necessarily takes certain policy choices off the table. Undoubtedly some think that the Second Amendment is outmoded in a society where our standing army is the pride of our Nation, where well­-trained police forces provide personal security, and where gun violence is a serious problem. That is perhaps debatable, but what is not debatable is that it is not the role of this Court to pronounce the Second Amendment extinct." D.C. v. Heller.