America's Invasion BY Socialism: THE Road to Despotic Power 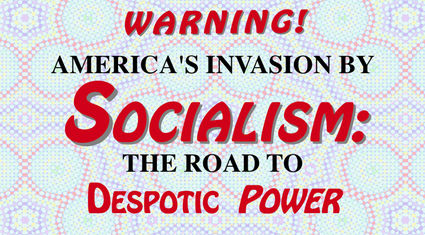 1, Abolition of property in land and application of all rents of land to public purposes.

3. Abolition of all rights of inheritance.

4. Confiscation of the property of all emigrants and rebels.

5. Centralization of credit in the hands of the State, by means of a national bank with State Capital, and an exclusive monopoly.

6. Centralization of the means of Communication and transport in the hands of the State.

7. Extensions of factories and instruments of productions owned by the State; the bringing in of cultivation of waste-lands, and the improvement of the soil generally, carried out with a common plan.

8. Equal liability for all to work. Establishment of industrial armies, especially for agriculture.

9. Combination of agriculture with manufacturing industries; gradual abolition of all distinction between town and country by a more equable distribution of the populace over the country.

10. Free education for all children in government public schools. Abolition of all child labor in its present form. Combination of education with industrial production, etc.

Already implemented in America are the following:

Note No. 2 from Manifesto: our now heavy progressive income tax in America.

Note No. 5 from Manifesto: our Central Bank, monopolistic, created in 1913 through the Federal Reserve Act.

Note No. 6 from Manifesto: the radical changes in control of communication, transportation, and media.

Note No. 10 from Manifesto: Government schools are educating about 97% of our children with School To Work being a high priority of Socialists, as well as Common Core and it's federal mandates.

Yes, we can acknowledge that Socialism has come to America.

The Socialist Agenda is clear. They oppose the ideals of American's founding, and oppose Constitutional Government as was created in our nation.

Excerpts from article on page 3A.