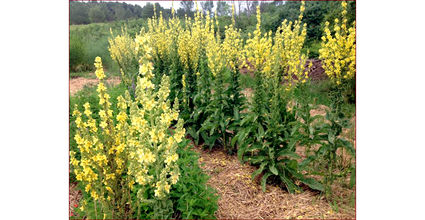 Not too long ago, I became intrigued by May poles with all the ribbons, colorful flowers, and small children dancing around weaving the wide bands of ribbon into a basket like pattern. I read several articles on the history of May poles, and found in a magazine a step by step process for accomplishing the result. At a mechanic's shop, I was given a 8 foot long iron pipe with a 2 inch opening and took this potential pole home as if I had been given the crown jewels. My family was very inquisitive about the pole, not knowing what I was going to do with it. Some suggested I was up to creating some strange watering system. Others thought that nothing good would be coming from the find. I kept my counsel, and went merrily along with gathering more stuff to transform the crude pipe into a thing of beauty. I spray painted the pole white with 2 coats. I then attached some stiff netting fluff and secured it to the inside of the top of the pole which puffed up at the top. Then buy yards of 11/2 inch ribbon of pastel colors that are then glued with gorilla glue under the netting. I found 6 iron re bars at least 4 feet high and pounded them into the ground about 1 foot deep. Another told me to dig a hole about a foot deep and pore in concrete. Before it set, put the pole in the center of this hole, and support it until the concrete cured. The pole fit over these, and after placing some artificial and real flowers at the base, we were ready to go the next day. What a lovely sight.

We would all like to have the picture we have painted with flowers to continue a few weeks longer. Planting 2 or 3 flowers or bulbs as an overlay can accomplish this which I call an extension of bloom. The most common idea would be a bed of pansies with tulips planted beneath the surface for a spectacular of layered color in the spring. If we treat daffodils as annuals then pull them out when bloom has gone. Daffodils can then be healed in until the foliage dies back, and can be replanted the next year. However, tulips in our area will not reliably bloom again the next year, so just discard them. In the summer or late spring, an under layer of begonias can be over planted with Gaura. Gaura is a perennial that has a feathery, wavy, 12 inch bloom head and will bloom the whole summer with the begonias. I have seen Gaura for sale in most nurseries in Montgomery and the retail stores such as Lowe's and Home Depot. I have had good luck with this technique using herbs. Curly parsley and dill make a good combination with the 2 distinct shades of green. Pots of 2 or 3 different varieties of clematis can bloom for over a month. I have a pot now that has been blooming for 3 weeks with a dark blue, then came the pale lilac, and just budding up for future bloom is a bright pink. Many have complained about having bad luck with growing Clematis. The common mistake came from cutting back the brown and apparently dead woody stems in the winter. It is these "dead" stems which carry the blooms for the next season. Clematis is much like the hydrangea which blooms on dead wood. Also one can plant 2 types of climbing roses together, one which blooms only in spring such as a Lady Banks, and then a summer or ever blooming variety such as a red Don Juan.

PLANT OF THE MONTH – Mullein--VERBASCUM

These plants are a large group of rosette-forming, summer blooming plants which have both biennial and perennial varieties. The plant and bloom stalks can reach 6 feet in height and are seen in our area on the side of the road. The foliage and the stems are covered in woolly hairs and most leaves have a dark green or gray-green color. Mullein are striking and give a vertical accent to the flower beds. I have grown V. olympicum or Olympic Mullein, with bright yellow flowers which gave height to my summer beds. These are self sowing, but need to be thinned before they reach weed proportions. They require plenty of sun, moderate water and not too much attention.