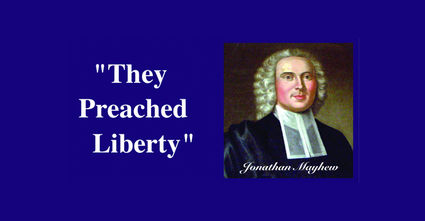 Years ago, D. James Kennedy sent me a book which he had published through Coral Ridge Ministries, by this title. He had made a passionate search of particular sermons preached throughout New England by virtually all the ministers of the period, from the 1700s through the period of the American Revolution and beyond. They were titled Election Sermons and Artillery Sermons. Of all the sermons preached in those early pulpits, these were the sermons that were printed out and most widely distributed among the American citizens. This one fact should give cause to look carefully at those sermons and discover that Liberty was of utmost importance to those ministers. Liberty was the passion of the citizens, who faced peril from the mother country.

In early America, Liberty was under fire as it is today. The Puritan clergy have been rightly called "The Watchmen on the Wall." This group of clergy were the most highly educated in the entire community. Most of them had graduated from Harvard and Yale when these institutions were still solidly sound in orthodox Biblical theology. These were remarkable men, not only skilled in Old Testament and Reformation Theology, but in other fields of knowledge, in a broad liberal education. Dr. Kennedy was interested in noting that the American Academy of Arts and Sciences was established primarily by these pastors in 1780.

These pastors' passion about how civil government should be ordered was evident in their sermons. Political subjects and admonitions from the pulpits were deemed most worthy subjects for sermons, and they were delivered in a manner to instruct the voter in insuring Liberty for our young nation.

Yes, of course, there were Tories who strongly objected to the Puritan views, but the ministers had their Biblical response: "Where the Spirit of the Lord is, there is Liberty," and "You shall know the Truth, and the Truth shall make you free."

They often referred to Hebrew History, which was held sacred to them. They could relate to the Hebrew children leaving the land of bondage and entering the Promise Land, and of course, to Moses receiving the Law.

By an intense study of the Hebrews, they understood that idolatry had been established in every nation of the world, by the time God raised Moses up as a deliverer of His people. Moral and social evils reigned in those cultures. There was no constitution, such as we know in America, in any other government in the world. The Israelites had ceased to worship the One True God.

That One True God used Moses to establish the means of a political religious constitution to insure Liberty, an idea of Providence in the mind of God. He would use the true religion to establish government, and then use the righteous government to protect the true religion. The Jewish lawgiver has given us the means to secure Liberty, which can be achieved in no other way. We can learn from Moses that the worship of the One True God has to be the FIRST Principle of Civil polity. Obviously, Satan's objective is to destroy that idea in our pubic square.

The Revolutionary pastors did distinguish between natural rights and civil rights. Citizens guarding their "natural" rights, must realize that righteous government, by compact or constitution, guards those rights for every man. God made a compact with Moses, Noah, and Joshua. We, who elect imperfect men to office, have a duty to limit their power and monitor their performance in office.

The greatest insight that is to be found in these early sermons is the fact that Liberty is grounded in Scripture. Randall P. Cole, author of the book, They Preached Liberty, wrote of the Puritan ministers: "They wished to conserve the best from the past, including Magna Charta, and their own colonial charters. In their opinion, the real radicals were those in the British government who were departing from the laws and traditions of old. The clergy opposed what Samuel Langdon, D. D., President of Harvard College, called the many artifices to stretch the prerogatives of the crown beyond all constitutional bounds."

Can you understand, that in opposing and resisting tyranny, they were defenders of the ancient liberties? These ministers were defending political and civil liberty, but they were also stressing the religious liberty that is only possible through education built on these ancient Truths. They were faithful to point out the obligations and the COST of liberty. Our forefathers fought a war to obtain it. My generation fought a war to preserve it. (WWII)

Before the beginning of the American Revolution, the New England clergy were pleading the cause of the African slaves. In the original draft of the Declaration of Independence, Jefferson denounced the British government for the slave trade, but the colonies of South Carolina and Georgia succeeded in striking this from the Declaration. In reading these sermons, many of them strongly preached against slavery.

Jonathan Mayhew, this New England minister, was declared to be "The Father of Civil and Religious Liberty in Massachusetts and America" by Robert Treat Payne, a signer of the Declaration of Independence. Payne was also an Attorney General of the United States at one time. Mayhew, recognized for his convictions, writings, and influence by James Otis, John Adams, and Samuel Adams, all his intimate friends, was also widely read by the patriot statesmen of his day.

Twenty six years before the Declaration was penned, Mayhew proclaimed, "Nothing can well be imagined more directly contrary to common sense than to suppose that millions of people should be subjected to the arbitrary, precarious pleasure of a single man, – who has naturally no superiority over them in point of authority, – so that their estates, and everything that is valuable in life, and even their lives also, shall be absolutely at his disposal, if he happens to be wanton and capricious enough to demand them."

In 1754, Mayhew's Election Sermon included this challenge: "God forbid that any son of New England should prove such a profane Esau as to sell his birthright! Our ancestors, though not perfect and infallible in all respects, were a religious, brave, and virtuous set of men, whose love of liberty, civil and religious, brought them from their native land into the American deserts. By their generous care it is, under the smiles of a gracious providence, that we now have a goodly heritage."

In 1750, warning against unlimited submission, Mayhew declared, "Tyranny brings ignorance and brutality with it. It degrades men from their higher rank into the class of brutes. It dampens their spirits, it suppresses arts; it extinguishes every spark of noble ardor and generosity in the breasts of those enslaved by it; it makes naturally strong and great minds feeble and little, and triumphs over the ruins of virtue and humanity."

In no other country of World History, has there been a government like ours. In early America, civil and religious liberty were combined in harmony for a season. In Charles Turner's Election Sermon of 1773, he warns the patriots, "Religious Liberty is so blended with civil, that if one fails, it is not expected that the other will continue."

In Ebenezer Bridge's Election Sermon of 1767, he declares, "As to religion and religious privileges, what people in the whole world are so highly favored as our nation? We have the Gospel, the freest use and the fullest enjoyment of it."

The fundamental principles of the Hebrew and the American Constitutions are prominently republican. There is great power placed with confidence in the people, assuming they are people of the Judeo-Christian faith. There is a great need for people of faith to read, research, and embrace our Christian History, if Liberty can be preserved in our nation.

Minister Jonathan Mayhew declared in 1754, "Rulers derive their power from God, and are ordained to be his ministers for good." This charge was emphasized in many election sermons over decades by New England ministers to declare admonitions to those elected to office.

We have an evil force in our nation whose objective is to tear down the law of Moses, which has been the source of our own liberty in America. This article implores your careful reading, followed by action in the public square to preserve both religious and civil Liberty. Prayer is essential, but becoming informed, is as well. My prayer is for the ministers to "Proclaim Liberty Throughout the Land" once again.

"God never gives men up to be slaves till they lose their national virtue, and abandon themselves to slavery." ~ Rev. Richard Salter of Mansfield, Connecticut, Election Sermons, 1768

But be ye doers of the word, and not hearers only, deceiving your own selves. ~ James 1:22