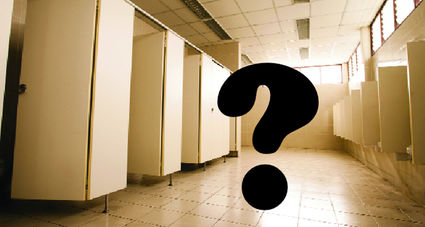 When I was in the third grade, I raised my hand one day and asked the teacher for permission to "go to the bathroom." She nodded, and I hurried down the hall to the door designated "Boys." When I had relieved myself, I headed back in the direction of my homeroom. As bad luck would have it, the doors in the hallway all looked alike, and I opened the wrong one. Two second-grade girls were standing there with their mouths open in disbelief. Then they both screamed and pointed at me. The loudest one said, "You're in BIG trouble!" The other shouted, "Get out of here!" Sweet kids.

I was mortified beyond belief. I sneaked back into class and looked at the floor, wondering who might have witnessed my unthinkable crime. That was decades ago, but I haven't forgotten my humiliation. The cardinal rule is that boys and girls never entered each other's private facilities. Never!

How the world has changed! Who would have believed a day would come during my lifetime when boys could meander into the private sanctuary of girls' toilets, or that it would someday be a civil right for men to use women's locker rooms and showers without permission or apology? Imagine sex-absorbed junior high boys ogling the bodies of developing pubescent girls or standing beside them in their showers. Have we gone absolutely mad? What ever happened to modesty, safety, and Christian mores?

Did it upset you when the president of the United States ordered every public school in America to open all its bathroom facilities including those that are in use by a member of the opposite sex? The president's order made me furious, and then sick to my stomach. How dare this man do something so audacious and unthinkable! His letter from the White House carried an implied threat to withhold federal money from local schools, which rocked the halls of public education. Who is this politician that is spending your hard-earned tax dollars to manipulate school officials, anyway? Who is it that is warping our children? It is Barack Obama, one of the worst presidents in American history, and it is time we stood up and said so!

Obama, acting like a king, is wielding dictatorial powers never envisioned in the law. He is determined to change the way males and females relate to one another, and worse, how children perceive themselves. If you are a married man with any gumption, surely you will defend your wife's privacy and security in restroom facilities. Would you remain passive after knowing that a strange-looking man, dressed like a woman, has been peering over toilet cubicles to watch your wife in a private moment? What should be done to the pervert who was using mirrors to watch women and girls in their stalls? If you are a dad, I pray you will protect your little girls from men who walk in unannounced, unzip their pants and urinate in front of them. If this had happened 100 years ago, someone might have been shot. Where is today's manhood? God help us!

(You are probably aware that Target has taken a stand to allow persons who "self-identify" as a man or woman to use the restroom of their choice. In addition to Target Stores, the following retailers have also decided, against the objection of their customers, to create "gender neutral" bathrooms: Starbucks, Ross, Walgreens, Toys "R" Us, and Barnes & Noble. My wife, Shirley, and I will no longer patronize these stores, and I hope millions of others will do likewise.)

Let's talk more about Barack Obama, who is a tyrant in many ways. How dare he assault centuries of modesty and moral beliefs! By what authority does he tell parents and school officials what to teach children under their care?

Christian parents, does this outrageous order violate something deep within your sense of propriety? The president has already maneuvered the courts to undermine a 5,000-year-old definition of marriage, after experiencing his infamous epiphany. Now he is determined to change Western civilization forever. He becomes more reckless and defiant as his second term comes to an end. Never has an American president been so absorbed with the use and abuse of power, and unfortunately, he still has seven months to go. What is next?

I grew up respecting the authority and dignity of the nation's presidents. Each of them was tasked to defend the Constitution against all enemies, foreign and domestic, and to protect our rights as citizens. That is what I was taught. My fourth grade teacher, Mrs. Harris, described for us the three branches of government, and how each division has the authority to restrain the other two according to a principle known as "checks and balances." It made America unique among nations. But, with the complete refusal of the U.S. Congress to restrain the presidency or to curtail a runaway judiciary that is itself drunk with power, "we the people" are victimized by those who steal our freedom. Our Founding Fathers would be shocked to learn how the safeguards on our freedom have been abandoned.

My friend Tony Perkins of the Family Research Council recently said he is often asked, "Why is the Obama administration trying to mainstream 'transgenderism' and force schools to accommodate students who want to use the bathrooms and locker rooms of the opposite sex?" Tony's answer gets to the heart of the motive: "It's all part of a radical movement trying to destroy the fact that God created man and woman – and that somehow people can choose what gender they want to be. The ultimate goal is to break down all sexual inhibition and morality – a goal that would result in social chaos."

This is what influential feminist Dale O'Leary had to say on the issue of gender and its meaning in her publication, "Gender: The Deconstruction of Women: Analysis of the Gender Perspective in Preparation for the Fourth World Conference on Women in Beijing, China." She wrote, "Although many people think that men and women are the natural expression of a genetic blueprint, gender is a product of human thought and culture, a social construction that creates the 'true nature' of all individuals."

Do you understand what she was saying? Gender is not determined by your chromosomes. It is a product of culture. If a man thinks like a woman, he IS a woman. Furthermore, if we protect children from social and religious conditioning, people will be free to move into and out of existing gender roles at will. Taking that concept to its logical conclusion, the feminists and LGBT activists want to dissolve the traditional roles of mothers and fathers and, in time, eliminate references to wife, husband, son, daughter, sister, brother, manhood, womanhood, boy, girl, masculine and feminine. These activists want us to replace age-old terminology with neutral terms, such as significant other, spouse, parent, child and sibling. You'll see that happening in the near future. The bottom line is that they want to destroy human sexuality and take with it the foundation of the family. That is their goal, and they have a president in office who is willing to use his executive authority to force this nonsense on us all.

Clearly, there are serious implications here for mothers and fathers. I urge you to protect your boys and girls from those who are espousing these views. Shield them from gender feminism and from those who would confuse their sexuality. They will be under increasing political pressure in years to come.

It is also important for us as adults to understand our own sexual identities. If we don't know who we are, our kids will be doubly confused about who they are. Any uncertainty, any ambiguity in that assignment must be seen as damaging not only to our sons and daughters but also to the long-term stability of society itself.

I urge you to base your teachings about sexuality on the Scriptures, which tell us, "God created man in His own image, in the image of God He created him; male and female He created them" (Genesis 1:27). Jesus, who was the first Jewish leader to give dignity and status to women, said, "Haven't you read ... that at the beginning the Creator 'made them male and female,'" and, "For this reason a man will leave his father and mother and be united to his wife, and the two will become one flesh" (Matthew 19:4-5). That is the divine plan. It leaves no doubt that the Creator made not one sex but two, each beautifully crafted to "fit with" and meet the needs of the other. Any effort to teach children differently is certain to produce turmoil in the soul of a child.

We must fight to protect our homes and families from politically correct politicians who would create new entitlements that take away our liberties. There is no time to lose. Our children hang in the balance.