Our Constitutional Republic is at stake...

Liberty or Socialism for all? 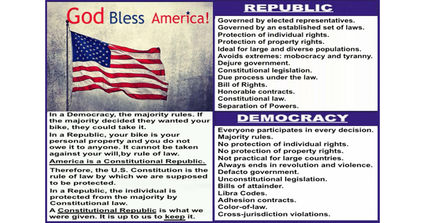 The publication of a pamphlet, "The Communist Manifesto," in the mid 1800's, may have attracted little notice in the beginning, but it has emerged as the most influential publication of the Century. The effect of this view of history and of the human race has had lasting influence across the world, and even in the United States today.

Written by Karl Marx and Friedrich Engels, who were Germans, but were employed in England, at the time of the writing. The document asserts that all human history is the story of class struggle. In earlier history, many nations lived through class struggles, whether Medieval Europe or the Roman Empire. In Rome, the struggle was between the patrician, the plebian, and the slave.

At the time of the writing, England was enjoying the growth of the manufacturing industry. Trading networks were expanding, raw materials were more readily available, and there was a growing and prosperous middle class emerging. Marx and Engels observed uneducated and unskilled laborers comprising the working class (proletariat) who were working in those factories. These laborers were necessary to maintain assembly line production. With increased industrial expansion came prosperity for the elevated middle class (bourgeoisie).

The Communist goal was to bring about revolutions between the classes and give control of all production to the State (which they hoped to see formed as a Communist State). Their goal was an idea firm in their mind, to have the State control the means of production, to abolish private property, and to have the State take over the control of education. They saw all of history as the history of class struggles. Yes, they would use that for their determined end.

A study of Communism, history, and revolutions will reveal its influence, even today, throughout the declining European nations and its influence in our own America.

Much earlier in the French Revolution, we read of "LIBERTY, EQUALITY, FRATERNITY."

"The Declaration of The Rights of Man" were drawn up and adopted by the French National Assembly in 1789, asserting that "all men are born free and equal in rights." It listed essential rights such as the right to liberty, private property, personal safety, and freedom from oppression. The French people had endured the absolutist rule of Louis XVI. The Declaration did not call for a Democracy, but it contained a plea for Liberty. There was at least a dream of Liberty among the French people, that didn't materialize.

Of all the ancient charters, the Magna Charta, 1225, has had the most lasting influence.

The ideals in this document helped shape the Constitution of the United States. To give an example of the legal principle and practice that it contained, read this:

"No freeman shall be arrested, or kept in prison, or diseased (have his lands taken away), or outlawed or banished or in anyway brought to ruin, unless by the lawful judgement of his peers, or by the law of the land."

Would this not stand today as a very fundamental judgement of Justice?

When the English became fascinated with the idea of colonization of the New World, a group of investors founded The London Company to bring it to pass. Only 4% of the investors belonged to the ranking nobility. Capitalism was very much alive, and 96% of the investors were tailors, skinners, salters, bakers, grocers, cloth workers, and fishmongers.

Capitalism worked well, as it always does, when combined with integrity and wise judgement. Every story of our founding seems to have an inspired message, whether it is Captain John Smith erecting a wooden cross on the shore of Cape Henry, or the founding of Plimouth Plantation in Massachusetts. The colonists could acquire their own property and earn the wages for their willing work. The citizens elected their own delegates for their assemblies, and made their own laws through a legal process. There was no sign of communism or socialism in the function of government in the New World. A Constitutional Republic was born with the exercise of the sovereign power lodged in Representatives elected by the people.

Noah Webster wrote: "It seems to be a political axiom that republics should be founded on an equality of rights, and or so constructed as to preserve that equality."

John Adams wrote, "The foundations of national morality must be laid in private families. In vain are schools, academies, and universities instituted if loose principles and licentious habits are impressed upon children in their earliest years."

Benjamin Rush certainly was in agreement. He wrote, "Without religion, I believe that learning does real mischief to the morals and principles of mankind."

One of America's most prominent women, Mercy Otis Warren, wrote, "It is necessary for every American, to stop the dissemination of principles evidently destructive of the cause for which they have bled. It must be the combined virtue of the rulers and the people to do this, and to rescue and save their civil and religious rights from the outstretched hand of tyranny, which may appear under any form of government."

Education played such an important part of the foundation of America. It was solidly based on a specific world view, which combined the fundamentals of Christianity and Republican government, framed carefully to protect individual civil and religious liberty.

In Federalist 51, James Madison wrote, "What is government itself, but the greatest of all reflections on human nature? If angels were to govern men, neither internal nor external controls on government would be necessary. However, not only do we not have angels governing men, but we have Progressives who deny the existence of God and without His guidelines (Ten Commandments) we end up with anarchy."

Christians, true Christians, are in such pain today. We look at the government educational system and realize that evolution and other immoral curriculum is taught as "truth" to students. There is a total absence of Moral Absolutes, as Relativism has replaced the Truth. True History was long ago replaced with Social Studies as designed by Progressives. Children are deprived of their rightful American Heritage. The legacy of John Dewey and Horace Mann and their followers have won the day....at least for now.

We look at the agenda of the Progressives, another name for Socialism. We see the call for more government controls over our everyday lives. Legalizing abortion on demand, gender selection, same sex marriage, and even some judges assuming the right to determine what is in "the best interest of the child" rather than the parents making that determination.

The goal of this article is a call to prayer for families and for our country. We look at the numbers, which constantly increase, of babies born out of wedlock. The number of babies aborted, the number of single parents who are rearing children alone, the number of children in failing schools through no fault of their own are all alarming!

We can all look back over our own family life and see our mistakes, but we can make a new determination this very day. Our country has no future without a Moral Base. To bring this back will take more than one election, as important as that is. We may not have the perfect candidate, but where will we be if Christians are not involved and make their voice heard and their vote count. It will take families committed to each other, with a Faith based commitment of parent to child, and child to parent, and sibling to sibling. For unity in the family, God made the provision for family life.

Hopefully, families who have neglected church attendance will locate an area church that honors the Word of GOD and where the paster preaches the truth boldly without compromise and where there spiritual needs are met. Hopefully, more grandparents will take the time to enrich the lives of grandchildren, especially if both parents work. This writer hopes that home schools and Christian Schools will increase as more parents become informed as to exactly what is happening to our culture and to the political process. Looking at the political process, it doesn't look "inviting," but where will we be if Christians are not involved? America's future as a Christian ConstitutionalRepublic is at stake. There is an answer in God's Word.

"Where the Spirit of the Lord is, There is Liberty." 2 Corinthians 3:17