"Deliver Us From Evil" 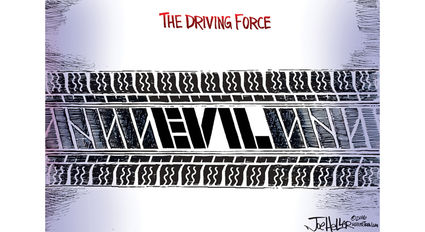 If you have ever been a parent, do you remember those conversations you wish you didn't have to have? Maybe it was about abusing a privilege, an accident in the car, failing grades in college or some other unanticipated circumstance of life. I never looked forward to any of them and upon reflection, am sure neither did my parents when it fell to their place to speak to me.

The subject of evil is one of those topics none of us really look forward to talking about either. How much more enjoyable it would be to talk about progress, peace, success and happiness. But we are not afforded those opportunities in the world we live in today. We are not to be constant forecasters of doom, while on the other hand, neither are we to have our heads buried in the sand.

It is a subject every generation has had to face. For most of us who lived through great wars and heartache of the last century, we entered this one with high hopes of a new age with less conflict on the world stage. Instead our lives and the relative peace of our nation were radically ripped apart with the attack on September 11, 2001. We thought, "Surely no one could do this to our beloved United States of America." But they did. From that time forward we have been faced with continuing upheavals and threats. We have been introduced to new concepts of war and see ravages of lands and millions of refugees from tyranny. Bombings and terror are no longer limited to lands far away with people we will never meet. Recent months have brought horrible images right to our homes through television. What moved from the Middle East into Europe has also come to our shores. There is a wave of fascism and anarchy among some groups in our country who seek to destroy the fiber of our nation. What was said by Chuck Hagel after 9/11 is still true.

Continued on page 7B

“What happened to this young lady is despicable and detestable. She was publically shamed and verbally flogged because she believes every life has value. But such an opinion is no longer allowed at the University of Houston -- where free speech has been strung up by a politically correct lynch mob.

They provided a statement to the Houston Press – trying to distance themselves from the actions of the student government association.

"The University of Houston continues to stand firm in support of free speech and does not discipline students for exercising their Constitutional rights,” the statement read.”

How far will we go?