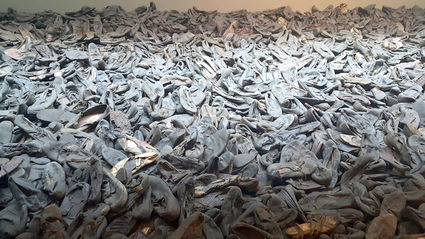 The Room of Shoes

Sitting here on vacation, there are so many things going on but today I only want to cover two items for now. There are sunny beaches to see so here goes.

1. The Olympics: First of all, after all the negative press about Rio before the games began, I did enjoy watching the Olympics on television for the past two weeks; for the most part. After all, during the games only one severed arm washed up in the Olympic bay, only one mugger was shot dead by a Russian diplomat and after only a week, the green "fart-smelling" water in the diving pool cleared up. Nice!!

First of all, my hats off the entire American Olympic team. At the time of this writing, the American team has clearly outpaced the rest of the world by scoring 105 total medals with 38 gold, 35 silver and 32 bronze. The next closest nation is Great Britain with 61 total medals. The women's gymnastics team was awesome and the US swim team, excluding the offsite antics of some of our swimmers, was equally impressive. I for one never get tired of hearing our national anthem being played.

Of course there were some disappointments and upsets but when top athletes compete, you never know for sure what is going to happen. A prime example was the Japanese beating the US men in the 4 x 100 relay. Wha-what?? That is before they were disqualified, yet again, for an illegal baton pass. Perhaps most disappointing to me was yet again NBC's coverage of the games. Yeah I get it that you could find other Olympic games on some other obscure channels but for crying out loud, there is more to the Olympics than swimming, gymnastics, track, diving and volleyball. There are 41 different sports played at the games and the one category of "Athletics," a.k.a. Track and Field, covers another 47 events.

If you were to tune into NBC coverage at night, you would never know this. My point, all of these athletes train most of their lives for this one moment in time and I think the major television outlet should showcase the work of all these athletes. Having a black belt in Isshinryu Karate, I would love to have watched some Tae Kwon Do matches but no luck. Likewise, I remember back in the days of Sugar Ray Leonard and Cuban Teofilo Stevenson, boxing was showcased on television. For the last two summer Olympics, not a chance. So we send many of these young men and women who compete in "obscure" sports and reward them by ignoring their contributions. This is unfortunate. I know people will just say to turn the channel and watch another station to possibly see some other sports but NBC should not play such favoritism. But then again, why should I be surprised when I look at their "unbiased" coverage of the political landscape.

2. The United States Holocaust Memorial Museum in Washington DC: The wife and I are finishing up a vacation trip to New Jersey. I am actually writing this in my brother's dining room. On our first day here in Jersey, my brother, his girlfriend, my wife and I drove over to Washington DC. Our primary purpose was to go to the Holocaust Museum. We also toured the Washington Monument and World War II Memorial but without a doubt, the Holocaust Museum was the highlight, not only of DC but our entire vacation thus far.

First of all, I have to get this out. Yes, if you visit Washington DC, the United States Holocaust Memorial Museum is a MUST SEE. I have been to many WWII museums, I have seen hundreds of photographs, watched dozens of WWII videos and movies covering the holocaust and nothing comes close to this experience. Nothing. I would say that if you were to take a child, depending on their age, you may want to cover their eyes when approaching certain displays.

The museum gives us three full floors of movies, videos, slide shows, audio presentations, models and artifacts to view. Some of these to be honest are quite horrific and some from Russian archives have not been readily seen in the West. Of some of the many artifacts there are large concrete fragments from the Chelmno crematorium blown up by the SS in April 1943 in an attempt to hide their activities. There is the actual Tarnow Cemetery gate where between September 1939 and June 1942, 5-10,000 Jews were killed. They have an actual cobblestone street which was part of the Warsaw Ghetto, an actual "Karlsruhe" freight car used to transport Jews to camps. To add to this experience the freight car is resting on actual tracks that led to the Treblinka station. So many fascinating artifacts are there that you can easily spend 5 hours or more and not see or hear everything.

3. Room of Shoes – For me, the most visceral and disconcerting display was the room of shoes. As you come out of a hallway and turn a corner, you are confronted with a room with nothing but thousands of shoes. Each of these shoes belonged to someone killed at a camp. In typical German efficiency, when people were "processed," everything about them was taken away. Clothes, shoes, jewelry, and even hair was taken, catalogued and then stored. When the camp at Auschwitz was liberated for example, over 15,000 pounds of hair was found stored and bundled into canvas bags. But for me, it was the room of shoes where I say more tears than in ANY exhibit I have ever seen. Black, white, asian, old, young, even one young muslim girl stood looking at those shoes with a face full of tears. I heard one woman crying and turned to see it was my wife reading the following passage from Elie Wiesel's book, "Night."

Yes my friends, I highly recommend this museum/ memorial experience. One of the poignant yet unfortunate truths was as after we got home, I showed my brother almost identical photographs of trenches lined with dead bodies recently shot by ISIS. Dead babies, decimated towns and a world once again in denial of the evil in man's heart. A sick denial that again allows for such criminal activity to go on with world watching in disbelief. The only difference between the Nazis and the ISIS scourge is a matter of degree. If these guys had the opportunity and capability to perform a holocaust on the same scale as the Nazis, you had better believe they would. It is up to all of us in the free world to ensure this never happens again. This is the true value of museums such as this. Without them, people would argue that these crimes never happened and if they did, that it could never happen. I am here to tell you they are all dead wrong.