FOR RELIGIOUS LIBERTY TODAY: THE IMPACT OF OUR PILGRIM HERITAGE SHOULD BE RESTORED 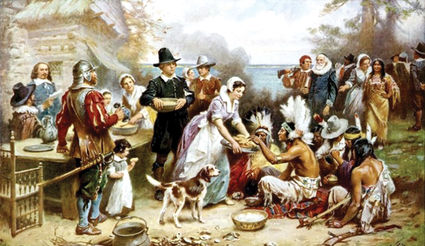 The England of the Pilgrim Fathers

By the later 16th Century, England was going through a process of changing society from the old traditional one to a modern one. The influence of the Renaissance had awakened the English people to ask new questions about, not only their culture, but about their government as well.

Blessed and enlightened by John Wycliffe and other Reformers, "The Englishman had access to the Scripture in his own language, and he was embracing the ideas of the Protestant Reformation. The speed of the Printing press enabled dramatic ideas to be spread so widely and enthusiastically, that we might call it a spiritual revolution. This was accompanied by an economic revolution as well. The expansion of industry and commercialism was developing what we know as Capitalism. It is evident that all of this would change the entire social structure of the land as well."

The Nobility and the Aristocrats saw their way of life threatened by these changes. The "country gentlemen" had considered their contribution as the "back bone " of society. Everything was changing.

Poverty had been a problem throughout their history, but now, it became more visible as farming decreased and industry increased. Many of the "visibly" poor congregated in cities. There were different attitudes about these people. Some viewed them as "God's misfortunates." Some viewed it as a "holy state."

The Puritan ethic about work was spread widely. The idea spread that we glorify the Lord by our work, and that it is a "calling" to be pursued. Puritans taught about a Paternal Order. Servants must obey their master, but the master must care for the servants. They taught that it is every man's responsibility to care for the unfortunate ones.

The legacy of these ideas and movements dramatically affected the Pilgrims as they came West, bringing the Reformation as their core values and intent.

The impact of the Pilgrim Fathers on our early History is not often shared today. Public Education had abandoned this glorious Christian History since I was in elementary school in 1936 onward. Of course, many children and adults recognize a photo of the black suited Pilgrim man, somber and often shown with a native Indian in the Massachusetts territory, but know little of their story in History.

The truth about that First Thanksgiving

There was no bountiful harvest. Everything was done in communal agriculture in the beginning. It was not until they switched to private enterprise, with every man accountable to each other, that there was a plentiful harvest. The first of this bounty was the Thanksgiving of 1623.

The Scrooby congregation passengers on the Mayflower were distinctly Pilgrims. Many were young adults, who had made a covenant with each other and with the Lord to commit to worship in earnest, just as the Scriptures called for. They developed a compact for their church self-government.

It thrills me to recall that these Pilgrims took that church covenant and rewrote it as the Mayflower Compact, in order to establish civil self-government. It is not an exaggeration to say that the Mayflower Compact is the forerunner to the U.S. Constitution. Because these Christian men and women had committed themselves to Christian self-government, directed by the Word of God, they accomplished three achievements that few people and few nations have every seen or practiced:

1. They, as individuals, accepted the responsibility for governing themselves, and displaying a work ethic, likely excelled by none on the planet.

2. They interpreted their Biblical laws of nature to apply to Society as a whole, leading to the Constitutional Law and the Rule of Law for all people, thus protecting their religious liberty.

3. They built an economic system which centered on personal responsibility. For example, the profit system was honest and provided opportunities for progress. A beautiful example of their personal sense of responsibility shines through twenty long years of their repaying their debt to the London merchants who financed their voyage. There was a great drive to develop tools for this economic system. The first water powered grist mill was placed at the head of Plymouth Town Brook in 1636. Can you imagine the delight of the onlooking Indians as they watched this tool?

Forced by the merchants in the beginning to accept the arrangement of communal distribution, the Pilgrims patiently persevered and obtained rights to own their own land and to work to benefit their own families. If Communism would have ever benefited a people, it would have worked for these Pilgrims who loved each other, and loved God above all else. It didn't work for them and cannot work for good, for any people.

When the Mayflower ship returned to England, not one Pilgrim went back. That little band of believers had introduced a new powerful force on the continent: that of individual religious liberty in practice.

All of these blessings of true Liberty demand individual Christian character. There is no better example of this character than the Pilgrims of Plymouth Plantation.

We are indebted to the Foundation for American Christian Education for their publications on America's Christian History and for the continued publication of the Webster's 1828 Dictionary, which has the language of Liberty.

Noah Webster deserved credit as the Father of America's Christian Scholarship and Education. The 1828 Dictionary is a treasure and can be viewed and purchased at our school campus.

We recommend that you go to the website of FACE.net and take advantage of their publications and conferences. They offer teacher training for Home and Christian schools, and have curriculum available for all grades. Their headquarters are in Chesapeake, VA.

As we prepare to celebrate an American Thanksgiving this month, let's work diligently and pray sincerely, for God to bring back in our nation Individual Liberty of Conscience, Christian self-government, and a dedication to the U. S. Constitution and the Rule of Law. Let us pray for our America, a nation that stands uniquely as a Christian Constitutional Republic!

Our article this month is dedicated to Judge Roy Moore, elected overwhelmingly by the people of Alabama, as their Chief Justice of the Alabama Supreme Court. He is a man of godly character who understands our Christian heritage of Liberty, enjoyed in America as no other nation has ever experienced. He has stood firm to protect this liberty, both Religious and Civil. Today is the day for Alabamians to restore Faith and to preserve Liberty, for this generation and for those to follow.

Thank you Chief Justice Moore. We are praying for you that your position will be restored, as it lawfully should be. Concerned citizens of the State of Alabama.