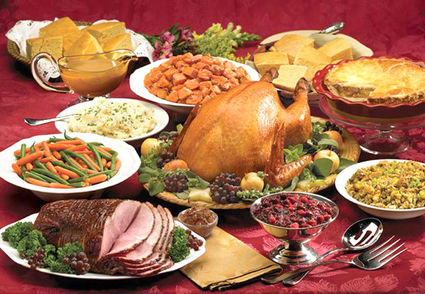 I believe that Thanksgiving is one of the last bastions of family traditions in this country. A celebration when the different generations of a family gather for a meal that has been part of the landscape of America since the Pilgrims. A time to give thanks for the bounty that has been bestowed on use and a time to strengthen the ties that bind a family together. The stories, adventures, mishaps, and good fortune that are shared and retold every year. And this bond in some families is so strong that it would be unthinkable that one would suggest that something new be introduced into the gathering, except for grandchildren.

The hardest part of this tradition to change is what's for Thanksgiving dinner. When you go the the grocery store, when you watch TV, read magazines and read food blogs on the internet, you are bombarded with ideas and ways to prepare and serve the perfect Thanksgiving dinner. The problem is that they mostly push the same thing; the same food, the same preparation and the same presentation. Roasted turkey, giblet gravy, baked sweet potatoes with melted marshmallows, green bean casserole with fried onions, a congealed salad or ambrosia or both, some form of cranberry sauce and sometimes there isn't a cranberry in it. Mashed potatoes and cornbread dressing for the giblet gravy and rolls.

Before everyone starts thinking I'm blasphemous for bad mouthing the traditional Thanksgiving dinner let me say that I enjoy Thanksgiving dinner. I have eaten beautiful, moist tender turkey, giblet gravy that was silky smooth and chocked full of flavorful bits of,well, giblets along with pies and cakes that would win a Blue Ribbon at any county fair. Meals where I didn't want to stop eating even though I had been eating for over an hour and loosened my belt two notches. And then while watching the Thanksgiving football games, I was ready for more. And the next day I invented ways of putting all that goodness between two slices of bread and eat some more. When I get through with a chicken or turkey carcass, it resembles the dinosaur bones on display at a museum. And I appreciate the hard work it takes to assemble a meal like this, when your kitchen isn't designed for the easy preparation of a turkey, dressing, starches, vegetables, desserts, appetizers, drinks and whatever else you typically serve at Thanksgiving. And to do it in one oven, with everyone coming into the kitchen to help and your kitchen is barely large enough for you. You are asked the same question about the meal from everyone walking through and you answer the same question everytime. If you do have some help, it is still like herding cats. The helpers don't know where everything is and don't know if you already put salt in the beans and don't know Aunt Sally's heirloom serving platter from the platter someone left at your house at a Super Bowl party. Even though is says Go Saints on it.

Our family always celebrated Thanksgiving but the same food was not always served. The customary fare for the holiday was not always the tradition in my family as I was growing up. Living in Portugal, Germany, Turkey and Pakistan and spending many vacations in the British Isles and other parts of Europe, had a large influence on the meals that we ate at home. I have always said that you should buy and eat locally, but they don't raise turkeys in Pakistan and don't eat sweet potatoes in Turkey. But Pakistan had good lamb and Turkey had Baklava. So I was introduced to a variety of foods as I was growing up and our family would still enjoy some of the dishes from other countries even when we were "back in the States" And we would incorporate some of those dishes into our Thanksgiving meal.

The most notable variation from the traditional Thanksgiving dinner was the meat. Roasted Pork, Ham and even Lamb were in the rotation of meats served but we held on to the desire for mash potatoes and gravy with the meals. The cranberry sauce was replaced with either mint jelly for the lamb or baked pine-apple rings on the ham. A good German mustard is a perfect match with the pork. We still had the vegetables and fruit with the meal, just different fruits and vegetables. Blood oranges from Crete were a welcomed change.

I am not going to tell you to completely change your Thanksgiving dinner with a menu you have not tried before. You have all next year to try alternative menu items on your family to see if they will be hits. But in the November 2016 issue of SOUTHERN LIVING, there are different recipes for sides and even turkey and different ideas for sweet potatoes that you should try. Their section on pies is to die for. Even if you only try one new recipe, it will be worth it.

I'm going to add my two cents to the recipe mix and pick some simple but not cosmic changing recipes that can be first steps in updating a traditional Thanksgiving meal.

First will be a Cranberry Sauce. No canned gelatinous goo taken from a store shelf. This time it will be fresh cranberries. The yield for this recipe is about one cup, so you may need to at least double the recipe, depending on how much cranberry sauce you served in the past.

1 cup fresh cranberries, about a quarter of a pound

1. Over medium heat, add cranberries, water, and honey and lemon zest to a sauce pan.

2. Bring to a boil uncovered for about 5 minutes. The cranberries will start to pop open, mush with a spoon any cranberry that has not popped.

3. Add pinch of salt and stir until thickened, remove from heat and remove cinnamon stick.

4. Save until service if made same day, or keep in refrigerator and take out and let come to room temperature before service. It's bright and tasty and fresh.

Note: depending on freshness of cranberries, water amount may be adjusted depending on how thick of a sauce you want. Same goes with the honey and sweetness.

A variation on this recipe is to omit the cinnamon stick and stir in one teaspoon of Dijon mustard.

The sweet potato casserole can be updated by only adding one additional ingredient: apples. Of course it does not use canned sweet potatoes in heavy syrup and please no marshmallows on top. This recipe can easily be doubled and is easy to make. Put everything in a bowl, mix and pour into baking dish. If you were doing this for a hotel banquet, you would fan alternating slices of potato and apple in rows in the baking dish.

If you want to throw caution to the wind, drizzle a couple of small streams of molasses over the potatoes and apples.

1 medium orange, juice and zest only

5. Remove foil and sprinkle with pecans and drizzle with honey.

6. Bake about 10 minutes more or until the pecans begin to brown.

If you want to throw caution to the wind, try a small drizzle of molasses over the potatoes and apples.

While the family is waiting for everyone to show up and waiting for the meal to be ready, some munchies are in order. As you stand around with nothing to do and you know nothing about hunting or football, having your mouth full excuses you from carrying on any conversations. So you can stand by the bowl of COCKTAIL TRASH and eat your heart out. This recipe came from my mother, and is written on a browned index card and written in pencil. Maybe written in the early 70's. Very basic recipe and I don't think you can mess this up.

Dash or two or three of hot sauce

2. When butter is melted, slowly pour over other ingredients in a large bowl and stir to mix.

3. Change to taste of the snack by using the drippings from hickory or apple wood smoked bacon, or even peppered and jalapeno flavored bacon.

4. Spread out on a sheet pan and bake at 200 degrees for about an hour.

5. Use a spatula to turn the mix a couple of times to even the toasting of the mix.

6. Remove from oven when toasty and let cool on sheet pan before putting in an airtight container to maintain freshness.

Three menu items that will be part of the conversations at next year's Thanksgiving dinner. Hopefully a good conversation. Remember every family has at least one weird relative. If you don't know who that is, its probably you.