The Origin of Old Glory 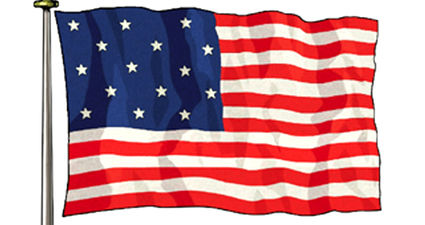 The story of the Stars and Stripes is the story of our nation. It is the story of freedom, liberty, and equal justice under the law. Our flag has gone through the evolution of our ideas and of our free institutions. The flag is our symbol, our emblem for our ideas, our faith, and our laws.

In our early days when we were thirteen British colonies, the banners borne by the Revolutionary forces varied widely.

The local flags and colonial devices, displayed on land and sea during the first months of the American War for Independence, carried the various grievances that the colonists had against the Mother Country.

The first public reference to the flag was published on March 10, 1774. A Boston newspaper, "The Massachusetts Spy," ran this poem as a tribute to the flag:

"A ray of bright glory now beams from afar, Blest drawn of an empire to rise: The American Ensign now sparkles a star, Which shall shortly flame wide through the skies."

In the summer of 1775, when George Washington had been appointed Commander in Chief of the Continental Forces for the defense of American Liberty, the Continental Congress was still corresponding with King George to present their grievances.

However, by the fall of 1775, the revolting citizens chose a flag that reflected their feeling of unity with the Mother Country, but expressed their demand to obtain justice and liberty.

In Taunton, Massachusetts, a flag was unfurled in 1774, which carried the British Jack in the canton, and had the words "Liberty and Union" printed on it.

The famous Rattlesnake Flag, carried by the Minutemen in 1775, showed thirteen red and white stripes with a rattlesnake emblazoned across it, and the warning, "Don't Tread on Me."

In 1775, the banner that flew over Fort Moultrie displayed a crescent on a blue field with the word "Liberty" printed in white. When this flag was shot down by enemy muskets, a brave sergeant named Jasper nailed it back to the staff at the risk of his life.

The Pine Tree Flag, which flew over the troops at Bunker Hill in 1775, displayed the pine tree symbol of the Massachusetts Bay Colony. It was a white flag with top and bottom stripe of blue, and it showed a green pine tree with the words, "Liberty Tree---An Appeal to God."

The first flag to represent the colonies at sea was raised by John Paul Jones from the deck of the Alfred on December 3, 1775. One month later, George Washington displayed the same design and named it the Grand Old Flag. This was on January 2, 1776. It had thirteen alternate red and white stripes and a blue field with the crosses of Saint Andrew and Saint George on it.

After July 4, 1776, the people of the colonies felt the need for a new flag-one that would be a national flag, an emblem of unity and independence. The Continental Congress acted:

"Resolved that the flag of the thirteen United States be thirteen stripes, alternate with red and white, that the union be thirteen stars, white on a blue field. The significance of the colors was defined thus:

Francis Hopkinson, signer of the Declaration of Independence and a member of the Continental Congress, is credited with having designed the American Flag.

Betsy Ross, the flag maker in Philadelphia, is credited by historians of the period with having made the first flag and having suggested that the stars be five pointed. Betsy Ross' home in Philadelphia is a national shrine, and the flag flies on a staff from her 3rd floor window. Her grandson, William J. Canby, wrote in 1857, that he vividly recalled as a boy of 11 being told the story by his 84 year old grandmother, Betsy Ross.

"It is not tradition, it is report from the lips of the principal participator in the transaction, directly told not to one or two, but a dozen or more witnesses, of which I myself am one, though but a little boy when I heard it... Colonel Ross with Robert Morris and General Washington, called on Mrs. Ross and told her they were a committee of Congress, and wanted her to make a flag from the drawing, a rough one, which, upon her suggestions, was redrawn by General Washington in pencil in her back parlor. This was prior to the Declaration of

Independence. I fix the date to be during Washington's visit to Congress from New York in June, 1776, when he came to confer upon the affairs of the Army, the flag being no doubt, one of these affairs."

There is in the Archives of the Navy an order "for making ship colors" for 14 pounds, 12 shillings and 2 pence, to Elizabeth Ross of Philadelphia.

The Marine Committee adopted on June 14, 1777, the theme of the red and white striped Union flag of Holland to the flag of the thirteen United States of America. Ezra Stiles, President of Yale University, recorded in his diary the resolution passed by Congress in 1777:

"The Congress have substituted a new constella of thirteen stars instead of the Union in the Continental Colors."

During the night of September 13, 1814, the British fleet bombarded Fort McHenry in the harbor at Baltimore, Maryland. Francis Scott Key, a 34 year old lawyer-poet, watched the attack from the deck of the British prisoner-exchange ship. He had gone to seek the release of a friend, but they were refused permission to go ashore until the attack had been made. On the following morning, Key turned his telescope to the fort and saw that the American flag was still waving. The sight so inspired him that he pulled a letter from his pocket and began to write the poem, which eventually was adopted as the national anthem of the United States – "The Star-Spangled Banner." Key was returned to Baltimore and later that day took a room at a Baltimore tavern, where he completed the poem. Years later, Key told a hometown audience in Fredrick, Maryland:

"I saw the flag of my country waving over a city – the strength and pride of my native State – a city devoted to plunder and desolation by its assailants. I witnessed the preparation for its assaults. I saw the array of its enemies as they advanced to the attack. I heard the sound of battle; the noise of the conflict fell upon my listening ear, and told me that 'the brave and the free' had met the invaders.

On April 4, 1818, Congress enacted the following law which is still in effect:

"An Act to Establish the Flag of the United States. Sec. 1. Be it enacted. Etc., That from and after the fourth day of July next, the flag of the United States be thirteen horizontal stripes, alternate red and white; that the union have twenty stars, white in a blue field. Sect. 2. Be it further enacted, That on the admission of every new state into the Union, one star be added to the union of the flag; and that such addition shall take effect on the fourth of July next succeeding such admission."

The First Flag Flown in Battle

Fort Stanwix, New York, August 3, 1777. The city of Rome, New York is the spot where Fort Stanwix was situated. On August 2nd, British and Indians attacked the fort, which was defended by Colonel Peter Gansevoort with 600 men. Lt. Col. Mellon arrived at the fort that afternoon, with ammunition and supplies, and he also brought newspapers that carried the accounts of the newly enacted flag resolution.

Soldiers gave up their white shirts. One of the wives at the fort donated her red flannel petticoat, and Captain Abraham Swartwout's coat made of blue cloth was donated to provide the blue field for the union.

In the Battle for Guilford Courthouse, March 15, 1781, was the first time the "Stars and Stripes" were carried by the North Carolina Militia of the American Army in the Revolutionary War. It had thirteen eight pointed stars.

A bronze historical marker, close to the Detroit River, identifies the spot where the first American flag was raised along the Great Lakes on July 25, 1791.

When George Washington transferred his army from Boston to New York, he carried the "Grand Flag" with him, and raised it over his headquarters.

When the army was established in 1789, the colors carried by the army consisted of a blue field embroidered with an eagle. During the War of 1812, the flag contained an eagle in whose breast was a striped shield. As each state was admitted to the Union, the stars around the eagle's head were rearranged to include the new star.

In 1834, the artillery and the 184th infantry were given permission to carry the colors.

Each state flag conveys her individuality. Alabama's flag consists of a diagonal cross, and the square shape of the flag recalls the Battle Flag of the Confederacy, organized in Montgomery in February of 1861. Alabama entered the Union in December 1819 as the 22nd state.

Flag Day celebrates the birthday of our Flag, June 14, 1777. By the 1890s Flag Day was a popular event. In 1916, President Woodrow Wilson issued a proclamation calling for a nationwide observance of Flag Day. However, it was not until 1949 that Congress made it a permanent observance, although not an official federal holiday. President Harry Truman signed it into law.

Food for our thought. Isaiah 5:26 "He lifts up a banner for the distant nations, he whistles for those at the ends of the earth...Here they come, swiftly and speedily."