The Christian Idea of Man and Government in America's History 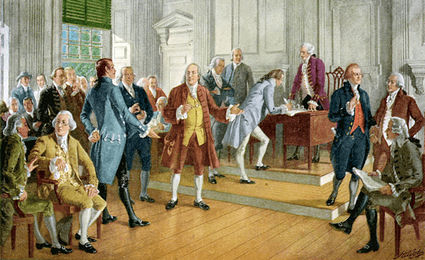 Fifty six patriots signed of the Declaration of Independence

Early in our country's history, the mother country caused great distress among her 'children.' They opposed the Declaratory Acts, the Stamp Act, and other measures. Among the opponents were the Whigs, Patriots, and the Sons of Liberty. Others submitted willingly to the Crown. Both sides claimed to conform to English royalty and be loyal to the British Constitution.

In reading the writings of Buchanan, Locke, Milton, Sidney, and other historians, we find what we call the "Christian idea of man," which embodies the very principles which formed the Declaration of Independence. It became our very own theory of government. Those who signed the document were mostly Whigs, prominent in their own localities. Whigs did not have a large majority of support in the beginning. They were strong in conviction, but that invited fierce opposition. These men were so strong and convicting in their arguments, that their number grew until it became a national party with tremendous influence.

The leading Tories, in opposition, still defended the principle of supremacy of existing law, and were indebted and loyal to the Crown for their positions. They defended arbitrary power. Over time, the Whigs were successful in creating a mass network of committees of correspondence. "Sons of Liberty," in opposition to the Stamp Act, marched with their banner, "Liberty, Property, and No Stamps."

In Richard Frothingham's The Rise of the Republic, we read that the "love of liberty under law was the reigning principle... they nurtured the idea that devotion to the cause of justice was a higher obligation than fidelity to the old flag, when it was used to cover despotic power. They revolved [pondered] the saying of a great patriot, that freedom and security, under Providence depended on themselves."

[Then] they turned to their own past history and to God's Word and reasoned, "that Englishmen in former ages had been justly renowned, and might turn the Great People to call on the name of the Lord, and to seek a redress of their grievances with the spear and lance at that glorious seat of justice, where Moses brought the Egyptians and Samson the Philistines."

Through the Declaration of Independence a new American system would be established, local government for the States and a national government for the Union. Each would have sovereignty, each in its own sphere. Americans were to be free from foreign influences and would acknowledge their rights coming from the Creator, inalienable rights of life, liberty, and the pursuit of happiness. We can affirm that the rights of the American system of government and culture come from the Christian idea of Man.

Fifty six patriots, true sons of liberty, signed the Declaration of Independence. Have you ever wondered who these men were, and what happened to them after signing this document of our liberty?

For years we have circulated a document sent out in this generation by the National Federation of Independent Business. Their office is located in Washington, D.C. The document, titled "The Price They Paid," we quote in part:

"What kind of men were they?" Twenty five were lawyers and jurists. Eleven were merchants. Nine were farmers or large plantation owners. These were men of means and education. Yet, they signed the Declaration knowing full well that the penalty would be death if they were captured.

When these courageous men signed, they pledged their lives, their fortunes, and their sacred honor to the cause of freedom and independence.

Richard Stockton returned to New Jersey in the fall of 1776 to find the state overrun with the enemy. He removed his wife to safety, but was himself captured. His home, his fine library, his writings... all were destroyed. Stockton was so badly treated in prison that his health was ruined, and he died before the war's end.

Carter Braxton was a wealthy planter and trader. One by one, his ships were captured by the British Navy. He loaned a huge sum of money to the American cause, it was never repaid. He was forced to sell his plantations and mortgage his other property to pay his debts.

Thomas McKean was so hounded by the British that he had to move his family, almost constantly. He served in the Continental Congress, without pay, and kept his family in hiding.

At the battle of Yorktown, Thomas Nelson, Jr. noted that the British general, Cornwallis, had taken over the family home for his headquarters. Nelson urged George Washington to open fire on his own home. This was done and the home was destroyed. Nelson later died bankrupt.

Frances Lewis also had his home and properties destroyed. The enemy jailed his wife for two months, and that with other hardships so affected her health that she died two years later.

"Honest" John Hart was driven from his wife's bedside when she was near death. Their thirteen children fled for their lives. Hart's fields and his grist mill were laid waste. While eluding capture, he never knew where his bed would be the next night. He often slept in forests and caves. When he returned home, he found that his wife had died, and his children were gone.

Such were the stories and sacrifices typical of those who risked everything to sign the Declaration of Independence. These men were not wild-eyed ruffians. They were soft-spoken men of means and education. They had security, but they valued liberty more. Standing tall, straight and unwavering, they pledged: "For the support of this declaration, with a firm reliance of the protection of Divine Providence, we mutually pledge to each other, our lives, our fortunes, and our sacred honor."

1. "Christianity is the only true and perfect religion; and that in proportion as mankind adopt its principles and obey its precepts they will be wise and happy.

2. That a better knowledge of this religion is to be acquired by reading the Bible than in any other way.

3. That the Bible contains more knowledge necessary to man in his present state than any other book in the world.

4. That knowledge is most durable, and religious instruction most useful, when imparted in early life.

5. That the Bible, when not read in school, is seldom read in any subsequent period of life.

My arguments in favor of the Bible as a schoolbook are founded."

As a Scientist, Rush declared, "The memory is the first faculty which opens in the mind of children. Of how much consequence, then, must it be to impress it with the great truths of Christianity... so necessary for our happiness." Rush was very aware that many in the field of Science were skeptics and this made him even more passionate about the necessity of the Bible as a school text book in America's schools. He spoke with passion, "We profess to be republicans and yet we neglect the only means of establishing and perpetuating our republican form of government; that is, the universal education of our youth in the principles of Christianity by means of the Bible; for this divine book, above all others, favors that equality among mankind, that respect for just laws, and all those sober and frugal virtues which constitutes the soul of republicanism."

Today, our challenge as Americans is to restore our heritage of this Christian Idea of Man and Government, as mandated by the God of the Bible and the Judeo-Christian religion. This writer has spent a lifetime in education that focuses on the Christian idea of man and government, through the Christian education of children.

Postscript: We invite any inquiries and comments to our articles.