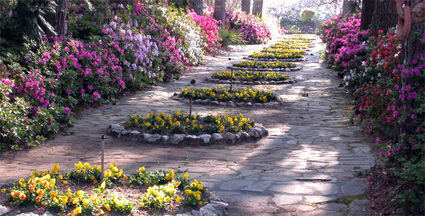 Spring flowers always make Jasmine Hill Gardens and Outdoor Museum in Elmore County a special place to visit. Usually the peak of spring bloom starts in mid-March, but the unusually warm weather in February made many flowering shrubs pop into brilliant color early. Camellias, which are Alabama's state flower, have been especially pretty with a brilliant array of flowers from the lowest to the highest branches open at once. Gardeners at Jasmine Hill commented that they had never seen the many varieties of camellias showing this much color at the same time.

This garden was started seventy-seven years ago by the grandson of Alabama's governor Benjamin Fitzpatrick. Named for his grandfather, Ben Fitzpatrick and his wife Mary conceived the gardens and took the name Jasmine Hill from the brilliant yellow Carolina Jasmine flowers which were blooming wild in the woods on their first visit to the property. The settler's cabin which had been constructed by the Harwell family in 1830 became their home in 1928 after they sold a chain of department stores in Florida, Georgia, Alabama and Mississippi. Luckily they took cash for their sale, because the great depression of the 1930's found them financially sound and able to travel extensively in Greece and Italy finding statuary to bring to their hilltop garden on the first Alabama outcropping of the Appalachians. It would be after their deaths that geologist Dr. David King from Auburn University would discover their garden is located on the western rim of an ancient meteorite crater.

During the depression one of President Roosevelt's CCC (Civilian Conservation Corps) Camps was located on Harwell Mill Creek within the crater. Mr. Fitzpatrick was able to hire the workers living there to collect stones from the creek and transport them to the gardens for building walls and paving walkways. Visiting garden enthusiasts have said that Jasmine Hill probably has more stone walks than any other garden in the country.

On one of their trips to Greece, the Fitzpatricks were introduced to German archaeologists who were busy uncovering ruins of ancient temples surrounding the stadium which housed the first Olympic games beginning in 776 BC. Just outside the entrance to the stadium stood the ruins of the Temple of Hera where the Olympic Flame is started and the Fitzpatricks decided they wanted to duplicate these ruins in their garden. Hiring a German archaeologist and an architecture student from the United States, the plans of the ruins were soon drawn and ready for duplication by the Indiana Limestone Company.

Assembly of the columns took place during World War II when the United States government was flying reconnaissance flights looking for subversive activities. They happened to fly over Jasmine Hill during the construction project which must have looked so strange from the air that they called the FBI to come down and inspect that "strange installation being constructed north of Montgomery." The agents were pleasantly surprised when they were told about the project to reproduce a temple which had been destroyed by earthquakes in Greece. The Jasmine Hill Temple of Hera ruins were used in 1976 as a site for celebrating the 200th anniversary of the American Revolution. This bicentennial event brought thirty folk dancers and musicians from three regions of Greece. Authentic Greek food was provided by Montgomery's Greek Orthodox Church.

In 1996, which was the 100th year of the modern Olympic Games, an estimated ten thousand people gathered to watch the real Olympic Flame arrive to light a cauldron on the Jasmine Hill Temple of Hera. This flame was, of course, started in Greece at the original Temple of Hera and was on its way to the Atlanta Olympic Games. Greek folk dancers and musicians were again part of that celebration.

The gardens are now open for visitors all year on Friday and Saturday from 9 AM to 5 PM and on Sunday from noon to 5 PM. Group tours can be arranged any day of the year with advance reservations. More information may be obtained on the website www.jasminehill.org or by calling (334) 328-8917.

The gardens are located between Montgomery and Wetumpka off U. S. Highway 231 on Jasmine Hill Road.

Springtime has always been a popular time to visit because of the profusion of flowers. In March the flowering Japanese cherries, redbuds and dogwoods begin their impressive show of blooms along with massive plantings of azaleas and beds of annuals throughout the gardens. As the season progresses many other flowering trees and shrubs, such as crape myrtles, hydrangeas and magnolias, show large splashes of color for visitors strolling the stone walks. Beds of annuals are changed seasonally to insure an abundance of flowers surrounding the many copies of ancient Greek and Roman statuary. The gardens are designed so that there is something blooming all year.

The weekend of March 24, 25 and 26 the Fitzpatrick cottage within the gardens will be open from noon to 5:00 PM each day for visitors. There is no extra charge for this added treat, and a free Coke will be available for refreshments. Hostess for this event will be Marsha Golden.

Visitors are welcome to bring a picnic to enjoy in the gardens. Family gatherings are always welcome. A wedding garden with raised stone altar may be reserved along with one of the two facilities for receptions. Parties, meetings and family reunions may also be scheduled at any time during the year.

As an added bonus for Gazette readers, you may clip the coupon following this article and bring it with you during the month of March for a 25% discount off of two regular adult admissions.

Good Luck Buckeyes available upon request during the month of March.