Montgomery Rotary Club Member assumes the Office of GOVERNOR for the STATE OF ALABAMA. 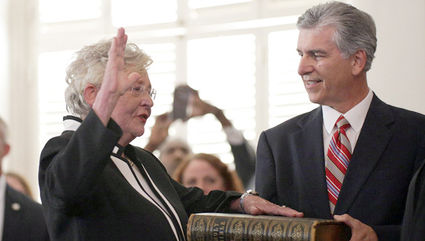 Governor Kay Ivey assumed the office of Governor for the State of Alabama on April 10, 2017.

Here are a few things you may not know.

Governor Kay is the second woman to serve as Governor. Lurleen Wallace, wife of George C. Wallace was the first.

She went to Auburn and was president of her pledge class of the Alpha Gamma Delta Sorority. Among many offices and honors, she served as the first woman vice president in the Student Government Association.

While at Auburn Kay enjoyed hiking and camping at Chewalca State Park, going to house parties and attending concerts at Foy Student Union.

Kay was a high school teacher and later had a long and successful career as a banker with a passion for teaching financial literacy to young people.

In the 70's she served in then Governor Fob James cabinet, later as a member to the Alabama Commission on Higher Education, won consecutive races for State Treasurer in 2002 and 2006. Most recently, Kay has served as Alabama's first female Lt. Governor. She was in her second term when she took office last month.

Acting Chief Justice Lynn Stewart using the Alabama State Bible, which has been used to swear in governors since 1853 led Ivey in delivering the Oath of Office, officially marking the beginning of Ivey's term as governor.

After the ceremony Governor Kay stated, "I will serve for the glory of God and the good of mankind. I ask for prayers and support, especially over the next days and upcoming weeks. Let's use this opportunity to make Alabama even better and your government more effective."

Governor Ivey is a member of the First Baptist Church of Montgomery.

Pictured beside her as she is sworn in as Governor is Senior Pastor Jay Wolf. She participates in a number of civic activities. For example, Kay has been a loyal member of the Montgomery Rotary Club for over a quarter of a century. She is a Paul Harris Fellow and attends regularly.

President Donald Trump called Kay a few days ago to congratulate her and wish her well on her new role as Governor. Kay is an outspoken critic of Obamacare, she is pro-life, and has an A rating from the NRA.

Kay is a great lady and leader. She has lived the Rotary motto, "Service Above Self".

Other Rotarian State Governors include: