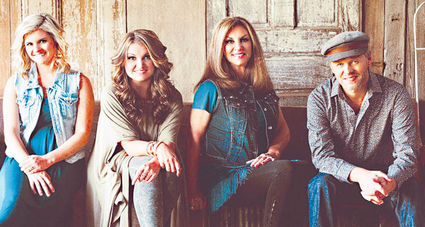 The Nelons and Michael English, two of Southern Gospel Music's awarding winning talents, will be the guest for the Elmore County Food Pantry Benefit Singing on Saturday, July 29 at 6 p.m. at Wetumpka Baptist Church. The Dennis Family and Spoken For Trio, local Southern Gospel groups, will also be singing.

The Nelon's roots date back to the legendary Lefevre's of Atlanta. After leaving the Lefevre's, the late Rex Nelon formed The Nelon's, which now includes his daughter, Kelly Nelon Clark and her husband, Jason and their daughters, Amber and Autumn.

The group has received numerous awards and accolades including three Grammy nominations, six Gospel Music Association Dove Award and many of their songs have topped the national radio charts. This family group continues to produce music embracing their Southern Gospel roots, while reaching beyond various musical boundaries with an emphasis on introducing songs for the church. They strive to bridge the generational gap of music lovers with beautiful harmonies and great songs.

Touring is a major dedication of The Nelon's consisting of more than 150 concerts annually. Their brand of Christian music has been spread around the world and they are regulars on the infamous Gaither Homecoming Video Series.

The group has recorded more than 35 albums with chart-topping Southern Gospel classics like "We Shall Wear a Robe and Crown," "Come Morning," and "O For a Thousand Tongues."

When the Nelon's are not on the road, they call Kennesaw, Georgia home. Though whether on the road or at home, the creativity never stops... and neither does the family bond. Jason is a triple threat as a singer, songwriter and producer while Kelly is an accomplished actress of both television and film, appearing in movies like "His Love Is Blind", "The Cardinal Rule and Losing Faith". Amber is signed to Daywind records as a solo artist and recently released her first adult solo album, "Just Sing". Her powerhouse soprano vocals earned her the coveted Favorite Female Singer win at the Absolutely Gospel Music Awards. She has a Bachelor's degree in Christian Counseling and is working on her Master's. Autumn joined the group full-time just two years ago and has been wowing audiences ever since with her crystal clear soprano sound and musical talent on both the mandolin and banjolin. When she leaves the stage, Autumn is hard at work studying. She's a freshman in college at Baptist College of Florida.

Together as The Nelon's, Jason, Kelly, Amber and Autumn are a family devoted to God, each other, and ministering the Gospel of Christ through music and the Word.

Michael English is a North Carolina native raised in a strict religious environment. He was on stage by the time he was in elementary school, performing in his family's Singing Samaritan's group between 1972 and 1980. He spent the next two years in the Southern-gospel ensemble The Singing Americans, and then joined the Happy Goodman Family in 1982 - 83. After six months with the Couriers Unlimited he returned to The Singing Americans in 1983 - 84. English rose to fame as a member of The Gaither Vocal Band in 1984 - 91; and Gospel Music Hall of Fame member Bill Gaither has remained his friend and mentor ever since. The young powerhouse vocalist never sought a solo spotlight, but the size of his talent could not be denied. He signed his first solo recording contract in 1991.

His solo debut, MICHAEL ENGLISH, created a sensation when it was released in 1992. It included the landmark performance "In Christ Alone," as well as such unforgettable songs as "Mary Did You Know," "Solid As The Rock," and "Heaven," the last named of which became his debut video. In 1993 his HOPE album spawned the memorable "Message of Mercy", "Love Moves In Mysterious Ways," and "Holding Out Hope To You".

When Michael English launched his solo career in 2000, he feared he had no Christian testimony to share with others. His stunning new Curb Records album, "Heaven To Earth", is ringing proof that the intervening years have brought him strength, wisdom, and a powerful message.

English faced many tribulations. In 1994, he confessed an extra-marital affair that nearly destroyed his life. His beloved and always supportive grandmother died when he began to rebuild his music career. His only brother was diagnosed with multiple sclerosis during the production of "Heaven To Earth". And just as this album's title single was issued as his comeback single, Michael English spent 30 agonizing days in treatment to overcome an addiction to prescribed pain medication.

During his time away from Christian music English lost his recording contract. However, Curb Records was quick to sign him as a pop artist, by releasing his "Healing" duet with Wynonna and his 1995 album "Healing". The company followed through with English's pop album "Freedom" in 1996. From it, "Your Love Amazes Me" became a top-10 hit on the Adult-Contemporary charts. English found that although he felt the Christian industry had turned its back on him, Christian Music fans never did. They showered him with love and forgiveness when he toured in support of "Freedom" in 1996 - 97.

He returned to his roots with a 1998 album titled "Gospel". Containing favorites he has sung all his life, the album was originally recorded as a personal project to sell to folks who came to his concerts. Again, the demand for his music was so strong that in early 1999 it became his third Curb release. It also won CCM Magazine's Favorite Contemporary Gospel Album award.

In 2007, English released an autobiography titled The Prodigal Comes Home. This book describes his fall from grace including his view of what led to his initial extramarital affair, his relationships with women outside of marriage after his divorce, his various brushes with the law, and his continued struggles with drug addiction.

In 2009, English rejoined the Gaither Vocal Band-making it a quintet-singing lead. English was inducted into the North Carolina Music Hall of Fame in 2011.

In October 2013, it was announced that Michael English would be leaving the Gaither Vocal Band to devote more time to his solo career. His departure was effective immediately. His final appearance with the group was performing "Alpha and Omega" at the 2013 Dove Awards.

The Dennis Family, a trio of ladies based in Millbrook Alabama, have made quite an impact on the Country Gospel/Christian Country Music world with the anointing of God and the spirit that lives within. Their dedication & commitment to the Lord's work has brought them national attention with numerous achievements & Awards.

Paulette Pynes, Alto of the trio, songwriter, and original member of the group, has been blessed with many things, one of which was her song, "Mountain Climber", being in the Top 80 Christian Country Music Chart for almost a year and climbing all the way into the Top 20 at # 2.

Denise Weldon, Lead singer, being the youngest of the trio has certainly not hampered her in her songwriting and singing abilities. Her talents have been amply rewarded. Her song, "Train For Glory" was in the Top 80 Christian Country Music Chart for 10 months and in the Top 20 for 3 of those months.

Millis Brown, Tenor of the trio, songwriter and comedian of the bunch has brought the crowds to tears with laughter with her comical attributes. Don't be mistaken by her joking and clowning around though, she loves the Lord and is 110% serious about His work. Her song, "Thank You Lord" was in the Top 80 Christian Country Chart for several months, peaking in the Top 20 at #13.

There are other members who work extremely hard behind the scenes. Paulette's husband, Wheat, is the bus driver, manager, booking agent, mechanic; you name it, he does it. With God's blessing and guidance and Wheat's willingness to help further God's kingdom, he get's them to each destination. They do approximately 150 to 170 bookings each year. Wheat always lets people know that he cannot do it alone and that God is the only way he gets things done. Rex runs the sound for the group and also plays drums with The Dennis Family Band. The Band is used on special occasions. Millie's daughter, Shae Brown, is the Table Tech and Gofer Girl. Paulette's and Millie's sister, Dona Dennis-Brooks, is the group's secretary. It takes team effort to make things work. It takes everyone to do the job no matter how big or small.

The Award Winning Trio, Spoken For, has been singing Southern Gospel Music in the Southeast for 17 years. They are from Prattville, Alabama. Their goal is to reach the lost for Christ and to encourage those who already walk with God in their everyday life. Robin & Joy Simpson (both vocalists) are the founders of the group and earlier this year, Patricia & Brian Hudman (vocalist & sound engineer), came to minister with Spoken For. Robin will bless you with his rich baritone voice, Joy with her strong & full of emotional alto, and Patricia with her smooth soprano. We consider this a ministry that God has called us to do for Him. We want to always be in His perfect will, displaying a testimony that would be pleasing to Him.

Spoken For has been able to share the stage with some of the most prestigious Southern Gospel Groups in the industry like: Gold City, Greater Vision-The Perry's, The Florida Boys, The Dixie Echoes, Triumphant Quartet, J.G. Whitfield & The Workmen Quartet-The Crabb Family, Mike Bowling, Karen Peck & New River, Mark Bishop, this is just naming a few.

Advanced tickets in the amount of $20 can be purchased at Elmore County Food Pantry, Wetumpka First Baptist Church, Prime South Bank, First Community Bank and River Bank and Trust. Tickets at the door will be $25. And although not necessary, attendees are encourages to bring non-perishable food items to the concert. There will be a container for these near the entrance.