If Your Town Is Not Painting Rocks, Your Community Is Missing Out On The Fun 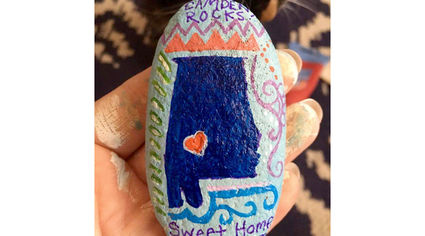 Often times in downtown Camden, there is no one out. The sidewalks are empty and so are the streets, except for the occasional car passing through.

Of course there are other times when it is busy. Early in the day when people are out running errands and working, and especially at the first of the month. On parade days the sidewalks will be crowded, and again when Santa rolls in on a firetruck during the annual Christmas in Camden festival.

And sometimes the courthouse square looks like a farmer's market with people milling around. You can't pick up a bushel of purple hull peas and a couple pounds of shrimp fresh from the gulf for supper when you bail out of most courthouses. But in Wilcox, you can get tomatoes and local honey too. Camden is protective of its farmers. Anyone visiting, or anyone who is lost and finds themselves at the junction of Claiborne Street and Highway 265, is encouraged to stop and thump the watermelons. But often there are just vacant parking spaces and silence under the shade of the old pecan tree.

That was until these last few days when things have started to change. I parked on Claiborne Street beside the Veteran's Monument Park Friday and immediately a truck pulled in and parallel parked behind me. A young girl jumped out of the passenger side door. She was grinning and started running. I watched her grab a painted rock like it was a baton in a relay race. All in one movement she swooped up the rock and headed back to the truck.

Her mom was smiling as she pulled away, and in seeing them happy I noticed that I was smiling too. I was clutching three painted rocks and had intentionally waited for them to drive away before I got out of the car so as to not give away the locations. I was about to hide one at the Veteran's Monument and the others across Broad Street at the courthouse and library.

I had seen different articles and news features about the Kindness Rocks Project. I know Andalusia is rocking and Prattville is participating as well as Monroeville. Several towns are, but I thought little of it really...because I live in Camden.

Specifically, I live about eight miles out from Camden in Canton Bend – which adheres to the Alabama River and connects to Possum Bend on one end and Millers Ferry on the other – but we all have Camden addresses.

The creative rock project initially began in Memphis, Tennessee. While the process of painting the rocks as well as finding the rocks can be an introspective process, the goal was simply to inspire others – both through the art on the rock and through the random act of kindness. Anyone who finds a rock is encouraged to share a picture on Facebook, then keep it or hide it again.

The local Alabama Camden Rocks page started on July 5. Within days sidewalks were filled with those young and young at heart. I've never witnessed anything so simple and positive bring a community together so quickly.

Neighbors have gathered kids together to paint rocks, along with church youth groups. Even during summer break a crowd of students got together to paint and hide rocks. Creative adults – some hesitant at first thinking they were too old to play – have joined in on the fun too. Toddlers, guided by their mothers and grandmothers holding their chubby hand, have in the other their own creation to hide in exchange for a find.

There have been painted turtles and puppies and lady bugs. There have been signs, scriptures and emojis along with messages and symbols of hope. Several posts of found rocks say, "This made my day!" Or, "I needed to see this today."

Kindness, it turns out, is contagious. And it can bring joy to the emptiest of places.

Amanda Walker is a blogger and contributor with The Alabama Gazette, AL.com, The Thomasville Times, West Alabama Watchman, and Wilcox Progressive Era. Contact her at Walkerworld77@msn.com or at https://www.facebook.com/AmandaWalker.