Architecture of the Constitution by Louis Wilson Ingram 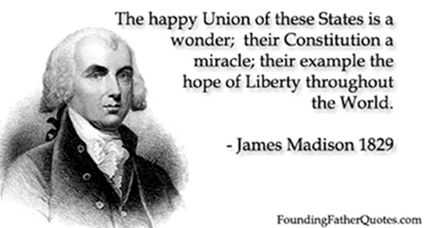 This is from a speech given by Louis Ingram.

Last month we examined the paradigm of our Constitution: fear of government power, and some of the reasons for that fear. We saw that government is a zero sum game pitting power against freedom. We also saw how the awesome Washington atmosphere generates a feeling of self-importance, and how power is useless if it goes unused. Finally, we saw that We The People fire only a fraction of our so-called representatives every two years, despite the fact that our ability to vote them out is our real limiting force.

Now we are going to look at how the Framers responded to that fear.

First and foremost, they denied any inherent powers to the government they were creating in the name of The People. All governments which arise de facto from the existence of a sovereign society have all powers necessary to function. Those that arise de jure from an act of their citizenry may have only the powers assigned to them in the constituting instrument.

The Framers made it clear that the national government they were constituting, had no powers other than those specifically enumerated. That narrow viewpoint has important implications.

It necessarily follows that the words or phrases which may admit to more than one interpretation, must be given that meaning, which is the more or most exclusive of additional powers. A more inclusive interpretation would undermine the fundamental purpose in enumeration of powers. That in turn, would undermine the fundamental purpose of The Constitution, which is to limit the powers of government.

We will examine in the next installment, the enumeration of powers, but here, let us look at the architecture of the document itself.

The organization of The Constitution mirrors that of any well written

contract. It is delivered into articles which are subdivided into sections, paragraphs, and clauses. The primary articles focus on distinct topics:

Article I the Legislative,

Article IV focuses on State Relationships with each other and with the federal government.

Each of these five articles defines a discrete subject.

Article VI collects miscellaneous items which don't fit into any of the foregoing articles, but do not require, because of brevity, separate Articles. That miscellany includes the assumption of debts (from the confederation), the supremacy clause, and the Oath of Office.

Article VII provides for adoption or ratification of the document.

Although the Bill of Rights consists of the first ten amendments, it is generally considered to be part and parcel with the original document. This partly because of its proximity in time, and partly because it was the price of ratification charged by several states.

Whereas The Constitution limits the powers of government by omission (only those powers enumerated may be used), the Bill of Rights explicitly denies the use of certain enumerated powers. For example, The Constitution authorizes the raising of an army and the corollary power to arm it, while the Second Amendment says the government cannot use that, or any other power, to disarm the populace.

There are three different types of restrictions within the Bill of Rights. The First Amendment differs from all the rest in that it speaks to a variety of subjects that are nowhere to be found in the enumerated powers. It forbids Congress from legislating in these areas, despite the fact, that there was no enumeration of powers to do so. "Congress shall make no law........"

The next seven amendments each limit Congressional action within a larger subject that has been authorized by enumeration. Surely the power to maintain an army includes the power to billet [direct] the troops. The third amendment provides that Congress cannot house troops in private homes during peacetime. That had been a bad habit of King George III.

The third type of restriction among the Bill of Rights is found in the Ninth and Tenth Amendments. The Ninth simply makes certain that the natural rights that we enjoy are not limited to those Rights specifically mentioned. Of course, it does not spell out what other Rights there may be.

The Tenth Amendment reserves to the States and to The People all the powers of government that have not been enumerated for use by the federal government. The principal utility of this Amendment is that it makes clear the restrictive purpose of enumeration just in case it should be missed. In fact, the purpose is so clear that one must have gone to law school in order to obfuscate [obscure] it.

The Constitution and the Bill of Rights are approximately 4,700 words in length. That is about seven op-ed pieces; not very daunting reading. Among those few words are 15 phrases which require some elaboration. Two of those phrases, as we shall see, are fundamental to the expansion of the Constitution by a juridical restatement of "all powers necessary to govern." That is the basis for destroying the document left to us by the Framers.

Two of the 16 phases are the roots of the juridical kudzu vine that has virtually strangled the very purpose of the document.

One is the so-called "elastic clause" which, as its nick-name implies, is the basis for an argument that Congress has powers limited only by what is "necessary and proper." It is the 18th and last power granted to Congress in Section 8 of Article I. "Congress shall have the power to make all laws necessary and proper... "Those who resent the restrictive nature of The Constitution and would delimit the power of government put a "period" immediately after "proper." Were that the case, they would be unassailably correct. However, the grant of power does not end with the word "proper."

Clause 18 actually says "Congress shall have the power to make all laws necessary and proper for carrying into execution the foregoing powers" and a few other powers granted in other parts of The Constitution. The additional words "for carrying into execution the foregoing powers," actually convert the proffered elasticity into quite the opposite, because any and all laws executed under the enumerated powers must also be necessary and proper. Whatever that is!

There's only one place in The Constitution that sheds any light on what that might be. The Preamble states with simplicity and elegance the six reasons for proposing the new Constitution. Those reasons are to form a more perfect Union, establish Justice, insure domestic tranquillity, provide for the common defense, promote the general welfare, and secure the blessings of liberty to ourselves and our posterity.

If a law falls within any of those purposes, and no others, it can be said to be "necessary and proper." So much for the elastic clause.

The other Constitutional power, which has been judicially defined to undermine the restrictive purpose of The Constitution, is the "taxing clause" of Article I, Section 8, clause i. "The Congress shall have Power To lay and collect Taxes, Duties, Imposts and Excises, to pay the Debts and provide for the common Defense and general Welfare of the United States... ."

When this was debated in the Convention, there were delegates who feared that it would be construde to confer legislative power for any measure that was arguably for the "general Welfare." James Madison successfully argued against such a broad interpretation, and later said "With respect to the two words 'general welfare,' I have always regarded them as qualified by the detail of (subsequently enumerated) powers connected with them. To take (general Welfare) in a literal and unlimited sense would be a metamorphosis of The Constitution into a character which there is a host of proofs was not contemplated by its creators."

The practical and dispositive test is to recall that The Framers labored during the most oppressively hot months, behind locked doors, in a building without the modern convenience of air conditioning, to formulate the limitation of specific powers to be granted to the new government. To believe that they would eviscerate their work product in a single phrase is to suggest that they were demented. But, of course they were not. In fact even Alexander Hamilton, chief apologist for powerful central government, correctly described the intention of the Convention to limit Federal powers in The Federalist Papers.

Having determined what general Welfare does not mean, it is important to conclude what it does in fact mean. Its obvious meaning is, of course, its true meaning. What it obviously means is the federal legislation must benefit the nation as a whole rather than special interest.

Reprinted by permission of the late, Louis Wilson Ingram,

beloved friend of our ministry.

We are grateful for the permission to use Louis Ingram's articles on the Constitution. In closing the article for February, I would like to quote John Adams, our 2nd President:

"Our Constitution was made only for a moral and religious People.

It is wholly inadequate to the government of any other."

My prayer is for a revival in America of our Judeo-Christian Faith, and the commitment to a Moral culture within the Rule of Law.