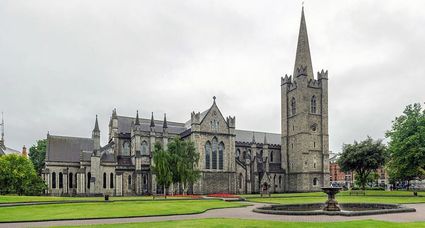 It is a joy to introduce to Gazette readers, Dr. Marshall Foster and the World History Institute that he founded in 1976. The ministry was founded to teach the Biblical and Historical foundations of Liberty. This ministry has become a major force to restore our nation to its Judeo-Christian heritage, reaching millions with America's True, yet "untold

His teaching seminars have reached tens of thousands of Americans, and his syndicated radio broadcast have reached millions of Americans. A graduate of the University of California, Talbot Theological Seminary, and his Doctrinal studies were completed at Cathedral Bible College. Marshall and his wife, Trish, have two grown children and seven grandchildren.

Marshall was co-producer of the film, "Unstoppable," with Kirk Cameron in 2013, and continues to produce popular films and documentaries. We encourage our readers to go to his website where numerous DVD's and CD's are available. http://worldhistoryinstitute.com/welcome

We have been friends for many years, and it is thrilling to see his ministry outreach in person, to more than 40 states, Canada and Europe.

Patrick of Ireland. Every year on March 17th we celebrate his life. Countless sons have been named after him. Innumerable churches bear his name as well. Parades in his honor march through the streets of great cities. But do we really know him? The truth is, very few people do. So, whether you do or not, permit me to tell his remarkable story...the greatest example in history of a man who won a nation without force of arms and transformed a society from chaos to peace.

Rome-the "eternal city"-had ruled the known world for 600 years. Control had been assured by the short and swift sword of the Roman Legions. But at the dawn of the 5th century, barbarian hordes sacked Rome. In the coming decades other prominent cities throughout Europe were decimated. Entire libraries and the precious documents of three thousand years of antiquity were mindlessly torched. Illiteracy became the norm. Within decades, Rome itself became a ghost town. Once a city of more than a million people, "its population [was] reduced ... to about thirty thousand inhabitants sharing with foxes, wild dogs, rats and wolves what was left of its magnificent buildings."1

In the years that the Empire was collapsing, Patrick was born in a small village along the seacoast in northern Britain-the foremost edge of Roman rule. The Celtic Christians of that region had enjoyed a measure of peace and prosperity for generations. Patrick's father, a minor nobleman, was a deacon and leader in the local Celtic community. As a young teen Patrick would have enjoyed exploring the cliffs and roaming the beaches near his home.

For centuries, the Roman Legions had protected the Britons from foreign attack. But one day in 400 A.D. the soldiers packed up and sailed away in a futile effort to save Rome. They never returned. Britain was left without any defenses against the wild Scottish Picts to the north and the fierce Viking raiders from Scandinavia. It was with good reason that lands outside the boundaries of the Empire were labeled "Here do be monsters" on Roman maps. And just as fierce and fearsome as the Picts and Vikings, were the Irish pirates, who specialized in what we would today call "human trafficking." The youth of Britain were their nearest targets, less than one hundred miles across the Irish Sea. Sixteen-year-old Patrick was a prime prospect for the vicious slavers.

One night, under cover of darkness, the pirates attacked. The carefree lives of Patrick and thousands of British youth were about to change forever. Blowing their battle horns, the raiders swarmed out of dozens of longboats. Bloodthirsty Irish warriors in full battle gear rushed into Patrick's hamlet. They killed the majority of the villagers but captured the young, the strong and the beautiful in nets and dragged them to the coast. They beat them into submission and threw them into the belly of their ships, like live fish in a bait tank.

After their merciless looting and pillaging, the pirates set out to sea and returned to Ireland with their cargo. Of all the captives taken that day, only Patrick was ever heard from again. He wrote, "I was about sixteen years of age. I did not know the true God. I was taken into captivity to Ireland with many thousands of people..."2

Patrick arrived beaten, bloody and bound at Larne, the slave traders' port in northern Ireland. He was sold to a Druid warlord named Miliucc. Miliucc bound Patrick and other captives in chains and force-marched them behind his chariots for the six-day journey back to his fort in the frigid north of Ireland.

When Patrick approached his slave master's fort he must have been shaken. The Druid obsession with death and human sacrifice surrounded him. Human heads were impaled on the walls of the fort. Human skulls were used as drinking bowls. Warriors hung the shrunken skulls of their enemies from their belts.3

The Irish were kept in constant fear by their Druid priests who demand human sacrifices to their many gods. Patrick likely observed the Druid ritual sacrifice of Beltaine, "the Wicker Man" ceremony. The Roman emperor, Julius Caesar, described this ritual: "[They] use figures of immense size, whose limbs, woven out of twigs, they fill with living men and set on fire, and the men perish in a sheet of flame."4 Caesar said that when the supply of criminals ran out the Druids simply executed the innocent.

For the next six years Patrick was a slave to Miliucc. He lived in the fields with the tyrant's sheep, fighting off packs of wolves and wild boars on the slopes of Mount Slemish. Patrick explains his condition: "I did not believe in the living God, nor did I so from my childhood, but lived in death and unbelief until I was severely chastised ... by hunger and nakedness and that daily."5

"WITH ALL MY HEART"

Patrick remembered the faith of his family, especially that of his father and grandfather. He continues: "But after I came to Ireland-every day I had to tend sheep, and many times a day I prayed-the love of God and His fear came to me more and more, and my faith was strengthened. And my spirit was moved so that in a single day I would say as many as a hundred prayers, and almost as many in the night, and this even when I was staying in the woods and on the mountain; and I used to get up for prayer before daylight, through snow, through frost, through rain, and I felt no harm."6

What happened next transformed this boy into a powerful, faith-filled believer and premier visionary of his age. Patrick describes His conversion: "There the Lord opened the sense of my unbelief that I might at last remember my sins and be converted with all my heart to the Lord my God."7

After years as a slave, Patrick experienced a vivid dream. He says that the Lord called him to walk two hundred miles to the east where a ship would be waiting to take him to freedom. Patrick followed the Lord's direction and walked all the way across Ireland as a fugitive without being detected. A ship was there, but the pagan captain at first rejected Patrick's request to come aboard.

Here in this seaport town Patrick faced his moment of greatest danger. In minutes he would be recognized as a fugitive slave. But suddenly, just as Patrick was praying as he walked away from the ship, he heard a voice from the ship, "Come quickly, they're calling you!... Come on board, we'll take you on trust."

They set to sail immediately and endured a harrowing voyage. Then they trudged for 28 days through a part of Gaul (France) that had just been decimated by the rampaging Visogoths who were closing in on Rome. There were few people and only bits of food left in the entire region.

Patrick writes: "... for twenty-eight days we travelled through deserted country. ... Hunger overcame us; and the next day the captain said to me: 'Tell me, Christian: you say that your God is great and all-powerful; why, then, do you not pray for us? As you can see, we are suffering from hunger; it is unlikely indeed that we shall ever see a human being again.'"

Patrick answered: "'Be truly converted with all your heart to the Lord my God, because nothing is impossible for Him ... suddenly a herd of pigs appeared in the road before our eyes, and they killed many of them ... and fully recovered their strength."8

Soon after this miracle, Patrick was released to make his own way. Here he may have spent some time at monastery in Gaul and also southern Briton. But after a few years, the future liberator returned to his family in Northwestern Britain. Patrick tells of his happy reunion: "And again after a few years I was in Britain with my kin who received me as a son, and sincerely besought me that ... after the great tribulations which I had undergone, I should not leave them and go elsewhere."9

There was no need ever to put to sea again. Surrounded by his family, in good financial circumstances, Patrick was ready to assume the role for which his birth and upbringing would have prepared him-marriage, a home of his own, children, perhaps a job in the municipality, or an ordination such as had been taken by his father. If Magonus Sucatus Patricius [Patrick] had pursued any of these, he would never have been heard from again, in this life, or any other."10

Soon after returning home Patrick experienced several life-changing experiences and visions that would change the course of history. Patrick describes one of his dreams: "In the depth of the night, I saw a man named Victoricus, coming as if from Ireland, with innumerable letters; and I read the heading of [one] letter which read, 'The Cry of the Irish', and while I was reading ... I heard the voice of those who were beside the wood of Focluth [near where Patrick had been enslaved], near the western sea ... they called out: 'Please, holy youth, come and walk among us again...' Their cry pierced to my very heart, and I could read no more; and so I awoke."11

Inexplicably, Patrick's heart was filled with a love for the Irish people. He spent the next decade or more preparing to go to the Irish with the Good News of Jesus and the whole counsel of God's Word. Over the next 40 years, Patrick's influence would shape the fate not only of Ireland but of Europe and the western world.