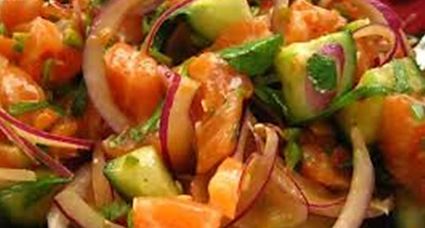 It is time to update your word processor dictionary. Well, at least, time to add some culinary terms. Merriam-Webster has added more than 800 new words to its dictionary and there are many new food words. The dictionary company added these words because they have "widespread, sustained, and meaningful use".

Now we know that Fond, the tasty bits of browned foods stuck to the bottom of a pan after browning or roasting has an official name. An Arnold Palmer is a drink that is a mix of tea and lemonade. My favorite word has relieved the stress I have had (LOL) trying to describe the thick juice in a can of chickpeas. Aquafaba is the name of the liquid that results when beans are cooked in water. The chickpea juice popular use is as an egg replacement in recipes for pancakes and waffles and said to whip up nicely for meringue. And as seen later, an ingredient to make mayonnaise. I am not sure if Pokémon or Poke (po-kay) came first, but Poke is a Hawaiian salad made with cubed pieces of raw seafood such as tuna, marinated with soy sauce, sesame oil, and mixed with chopped onions and other ingredients. Other added words like Za'atar, Tzatziki, and Queso have been around and are popular on Pinterest.

The French have had a real problem with Americanized words creeping into their language. French Canadians fight it by passing laws banning certain American words from being used at all. Well the French must be just beside themselves with this news. The mighty and humble hamburger is now France's favorite snack. It has overtaken the French sandwich, the Le Jambon-Beurre, the traditional ham sandwich. Moreover, a "further blow to the Gallic sense of gastronomic superiority", burgers have spread beyond the fast food industry and is now on the menus of 85 per cent of the country's restaurants.

Looking at the calendar, two things come to my mind. First is Tax Day, but I am not going to discuss taxes, except to say we are not getting our money's worth for what the government does with our money. There are Food Days when we can have more fun. Let us start with the second week, Egg Salad Week and April 29, Shrimp Scampi Day. If you can find some fresh peaches, go for it, but if you have peaches in your freezer from last year, you know what to do on Peach Cobbler Day, the thirteenth. If you missed the Chinese New Year, February 9, you can still celebrate Chinese Almond Cookie Day on April 9. I could not find a Cookies and Milk Day, but there is a National Oatmeal Cookie day on April 30. This is my favorite cookie after Peanut Butter cookies. Everything comes after peanut butter! I am going to stop and take a break, because I am hungry and I have too much oatmeal in the cupboard. I found an Oatmeal Cookie recipe in one of my old index card boxes. It makes a cookie that is soft, chewy, and thick, the three components I like in a cookie. This recipe is like every recipe you find handwritten on an index card. You try it as written then you tweak it to suit your tastes.

Now that I only have 12 cookies leftover, I had better get back to writing.

(not instant or quick cook)

1. Beat butter until soft and airy, and then add granulated sugar, and brown sugar and continue until creamy. Add eggs and vanilla extract; beat until well combined.

3. Using a spoon gently stir the oats in by hand until just combined.

4. Roll 2 tablespoons dough into a slightly flat ball. Place on baking sheet about 2 ½" apart on the baking sheet. Bake at 350℉ for 13 - 14 minutes, or until golden brown and set but still soft in the middle. Let cool slightly on the baking sheet, then place on a wire rack to cool completely.

I saw an article that confirmed what I have been saying in my articles. Local farmer's markets is the place to get good deals on produce, you can save on some items if you buy in bulk, and spend time looking at grocery store flyers for the deal of the week. The author also said that he saved about $40 per week by dividing the grocery shopping among multiple vendors. I have to determine how far I drive to get a better price. The closest full-scale grocery store from my house is 16 miles away. If I am going to get something I need immediately, I still have to drive 6 miles to get to a small grocer that by necessity has to charge higher prices. Take some time one weekend and study just how you shop, according to the article I read, the author was feeding four people, with full healthy meals at home for $300 a month.

Now for the Cook's Warning Section:

The instant pot and slow cookers are the rage. They both have their advantages and can make life simpler. However, there are warnings you should heed, especially for slow cookers. Yes, there are warnings about food and nobody listens to them. Such as, do not eat that raw cookie dough. Do not eat homemade mayonnaise. Cook that hamburger well done. I have not followed any of those warnings. However, I will always follow one. DO NOT put frozen chicken in your slow cooker. Even though some slow cooker instructions, say to do just that. If you know anything about the food temperature danger-zone (40 to 140 degrees), you will change your cooking method. The chicken sits in the slow cooker and sits at the danger zone for way too long. The USDA says that slow cookers are safe if you always place defrosted meat in your cooker. Since the instant pot is also a pressure cooker, it will cook the chicken fast enough to avoid the long danger zone stay.

Remember one of the new words, POKE, that the Merriam added to its dictionary?

This recipe is fresh and light. I know that eating raw fish may be a stretch for some people. This recipe may change your outlook. And pretend the salmon came from southern Hawaii. At least buy the onion, lime, and cilantro locally.

½ - 1 tsp red pepper flakes, depending on your heat preference

Juice from one wedge of a fresh lime (no bottles!)

Half of a semi-firm avocado, cubed

1. Combine all ingredients together in a bowl. Toss to coat well. Cover tightly and chill for at least 1 hour. Serve cold.

2. Serve with white rice. If making hand rolls, simply cut a nori sheet in half, fill with desired amount of rice and salmon poke, and roll it up. Eat rolls immediately.

Be sure to chill at least an hour.

From: Chew Out Loud http://www.chewoutloud.com

I am going to jump in to one of the areas where no matter what you recommend in a recipe, there will be comments, like that is not the way we did it in the past. I never did biscuits like this in the past and always have a supply of bacon fat and I do not like hydrogenated fats. I found several recipes online and read a recent article in Garden & Gun. That article explains the reasons for changing the cooking method from normal butter fat biscuits.

Back to the new words from the dictionary and most likely the strangest use of the food. I have not written about anything vegan. I am a second-hand vegan; animals eat plants, and I eat animals. That will be as close to being vegan I will get.

Taste it and add more lemon juice/cider vinegar if you prefer a slightly sharper mayo. Similarly, add a bit more mustard and/or salt if preferred.

Store it in the clean glass jar, screw on the lid, and keep in the fridge. It should keep for at least a week if not several weeks – both cider vinegar and lemon juice are natural preservatives.

So go out into the world, and have your Bacon Fat Biscuit Ham and Cheese Sliders with your Vegan Mayonnaise while you ponder what to do with the open cans of chickpeas. Do you think they will work in some Poke?

1. Measure the aquafaba, cider vinegar, lemon juice, mustard, and salt into the jug. Give a quick whizz with the hand blender to mix everything up.

2. Switch on the hand blender in the jug on low and drizzle the oil slowly – about ¼ cup or 4 tbsp. at a time – into the other ingredients.

Keep the hand blender under the liquid to avoid spattering. Increase the speed on the blender.

Keep drizzling and blending until the mixture is thick and looks like mayo. It will be thicker in some parts than other so move the blender around to make sure it is all the same consistency. If necessary, switch off the blender, scrape down the sides of the jug and stir everything about quickly then start blending again. You can even make this in a glass jar if it is wide enough to take the stick/immersion/hand blender (all the same device!). Just make sure there is a lid to put on the top.