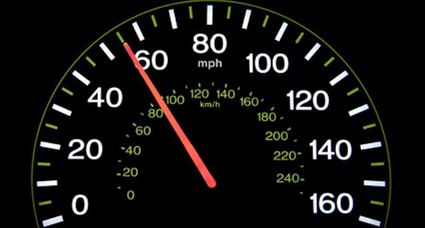 I was watching the news the other day, minding my own business when out of the blue, I heard something so stupid, so ridiculous, so un-American that I had to hit the rewind on my DVR and watch the news segment again. No way. No how. Come on, are you kidding me? Now I am not talking about snowflakes pounding down Tide Pods, crying in the streets and foolishly calling for an end to the Second Amendment. Nor am I talking about the cretins crying the NRA has blood on its hands while ignoring the wholesale slaughter of millions at the hands of planned parenthood. No, this is something different but almost as stupid.

After hearing this senseless, lawyer goon on the television, I went online to see what this idea was all about and found out that there have been calls for this since at least 2010. The problem? I even hate to say this but there are those who want people of different economic levels to pay different fines for speeding. For one, there is a New York Times Op-Ed titled, "A Billionaire and a Nurse Shouldn't Pay the Same Fine for Speeding." I for one, cannot even begin to let you know how much I disagree with this idea. Let's get to it.

1. Since when in America, by law if not by practice, are people penalized for having more money than others. Yeah, I get it as we all do that a lot of people with money and influence skate when it comes to paying for their crimes. Hillary Clinton of course is the first to come to mind. Sons and daughters of politicians and people of influence have always gotten away with stuff you and I would have gone to jail over. Just ask Martha Stewart about her jail time when members of Congress and the Senate were doing the same thing she did. But the idea of imposing different fines for the same crime base upon wealth is

ludicrous. You have two drivers speeding the exact same speed over the limit, at the exact same time of day, in the exact same type of car but one person will pay more of a fine than the other because he/she has more money in the bank or has a higher salary than the other? I don't think so. After all, this is not Nazi Germany folks. Not to mention that pesky little thing found in the 8th Amendment about excessive fines being imposed. No, in my world, "same crime, equal time."

2. I thought the left was entirely opposed to profiling. Let's be serious here. If speeding or even parking fines were levied base on wealth, do you not think profiling would be the name of the game? Two cars speeding down I-85 side-by-side. Both doing 85 mph. One is a beat-to-snot 1962 Corvair and the other is a 2018 Corvette. One cop; one chance to pull one car over; one choice. Who do you think he is going to stop knowing that chances are, pulling the Corvette over is going to get the city or state substantially more money? In a nutshell, that is profiling and not to mention state-sponsored discrimination (the act,

practice, or an instance of discriminating categorically rather than individually). We are not supposed to profile terrorists at airports but you want to profile

American citizens driving down the highway? Really? What exactly are they teaching these guys in school these days? Either profiling is good and acceptable or it is bad. Which is it?

3. Since when do we reward criminals for their activity? Before anyone goes democrat on me, guess what? Speeding is a crime. Here is some basic logic 101. The speed limit is a law; you break the law you are committing a crime; you commit a crime, you are therefore a criminal. Kinda like that whole if a=b, and b=c then a=c thingy from school. Easy, greasy. You are breaking the law. I bet that most people reading this column, including yours truly, breaks this law almost on a daily basis. Yes, that makes us criminals by the letter of the law. So let's deal with that reality and go on from there. I know that when I drive my car back and forth to Atlanta, I set my cruise control at a certain speed, nothing too ridiculous, but by the letter of the law I am at times breaking that law. I am. I can admit that. At the same time, I have told myself that I can live with the consequences of a speeding ticket if I get pulled over. I have made that cost/benefit analysis in my head and am okay with it. I can always choose to back off a little and avoid any potential stops if I want. Bottom line, if you can't do the time, don't do the crime. Yes, it really is that simple. If you cannot afford or rather, do not want to pay a fine, simply don't speed. Hello, somebody!! Now, isn't that easy? But in my opinion, the "State" in an effort to increase

revenue for more of its unnecessary and frivolous spending would willingly use this method of intrusion to increase its coffers. A word to the "State," stop spending more than you have.

4. "Other countries have similar programs in place, shouldn't we?" Uhhhh, no! In one article a Finnish business man was slammed with a $60,000 speeding fine for doing 14 mph over the limit. Their excuse? "This is a Nordic tradition. We have progressive taxation and progressive punishments. So the more you earn, the more you pay." So, is this what we want? Are the Europeans so much more enlightened than we are? No, they can keep their liberal and progressive ideas and mandates. Based on their fallacious ideas, let's say a person who earns $40,000 per year gets a ticket that requires them to pay ½ of 1 percent of their income and now has to pay a $200 fine. Under that plan, a billionaire would have to pay $5,000,000 for the same offense. Does that make sense to you? Not to me it doesn't and I am in no way a billionaire. If I am sitting in traffic court between two other offenders, if we have done the same offense, I should not have to pay less than the person to my right or more than the one to my left. The argument that a $150 fine, for example, impacts the billionaire less than the person earning less money is too circular for my taste and again in my view conflicts with the 8th Amendment while it

5. So where does this stop? Two guys jaywalking. One homeless, one guy in a business suit. Who gets pulled over? Two guys rob a bank and get caught. One guy has $500,000 in the bank, the other guy has $0. You gonna give the wealthier guy more time for the same crime? Two teachers sexually abuse their students but the one with more money in the bank gets more time and bigger fines than the other? "Rob, now you are being ridiculous." No, no I am not. The principles remain the same. Context is different, but the principles are the same. Several years ago I wrote about two airline pilots sent to jail for flying while intoxicated when nobody was close to being injured and yet we have thousands of people per year killed by drunk drivers and many of them have been pulled over dozens of times in the past. We can argue degrees all day long if you want, but not the principles. SAME CRIME; SAME TIME; SAME FINE.

6. Let's say something stupid like this was actually passed here in the People's Republik of Amerikastan. Higher fines for equal crimes. So where do you think all the speed traps (and yes there will be many), will be located? How does one fairly adjudicate these fines? Percentage of income? Type of vehicle driven? Percentage of money in the bank? What about the lottery winner with $200 million in the bank but with zero actual income? Does he pay less than nurse who makes $40,000 per year? To me, it is all nonsensical. It is not at all like paying higher taxes for a bigger house or more expensive car. I get that and fully understand it. I embrace that. But I cannot agree with the idea that two people, who commit an equal offense (i.e. break the law), by law will be

punished at a different rate. No, I cannot support that. Sorry.

The views of this editorial may not express the views of The Alabama Gazette.