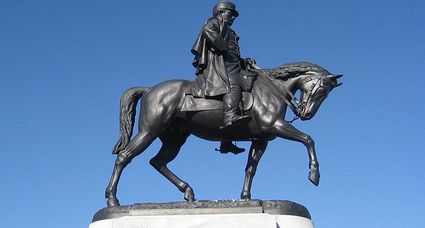 New Orleans Mayor (wannabe actor) Mitch Landrieu has made many appearances recently from 60 Minutes to the usual 'talking head' TV morning circuit displaying removed statues stashed in secret locations and extoling his recent book entitled: In the Shadow of Statues: A White Southerner Confronts History. The removals were prompted by efforts to rebuild the city after devastating hurricanes. I'm not foolish enough to think champions of leviathan like Messrs. Christie, Landrieu, et al will ever understand (or at least admit to their demagoguery) over bearing big govt. agencies/programs - e.g., Corps of Engineers, federal flood insurance, etc. exacerbate these deleterious results. Rebuilding with reckless abandon for those who will again be put in harm's way is not a matter of concern to politburo members. The next super storm will rack up yet another unnecessarily high damage result, rinse and repeat.

Many have heard me lament I've run out of South... I began in Baltimore (home of the Star Spangled Banner/Ft. McHenry) where every Sunday on the way to church monuments were there to remind me - none more sobering than the marker for first blood in the war between the States when the 6th Massachusetts committed (Art. 3, Sec. 3) treason against my home State -- still in the Union at the time. Then to Liberty, SC where every morning to Clemson I passed the John C. Calhoun house. Lastly, to Alabama where I passed the marker of when the Auburn cadets gave Jefferson Davis his first military honours as President until federal bureaucrats made me and my bride homeless from this lovely place at the end of College Avenue at 280; indeed that loveliest village on plains of Dixie no longer exists for us. We pray to remain in the rest of our days in Beauregard where the good folks there have shown themselves to live up to their namesake well... wish I could type the same for Washington, DC.

Observing the 'reformed' sentiment for this good servant soldier by the politicos in New Orleans, I asked my State Senator to request their Mayor to allow us to move (dare I type parole?) the statues where they would be more welcomed. A somewhat shortened version of the request is as follows:

Re: relocation of statues to Beauregard, AL

I humbly request your generous City of New Orleans consider allowing the statue(s) of P.G.T. Beauregard be relocated to the place in Alabama which bears his namesake in Lee County Alabama. Of course, we'd be delighted to also have R. E. Lee statutes relocated to the county which bears General Lee's name, but it seems far too much to ask.

The town of Beauregard genuinely wants this honor bestowed upon them as they've already shown how much they revere Pierre Gustave Toutant-Beauregard as a great American Christian gentleman worthy of veneration. As an example of the diverse organization known as the Confederate States of America, Beauregard, the "Little Creole" from St. Bernard Parish, left his mark in Southern history. Born in 1818, Beauregard grew up on a sugar cane plantation close to New Orleans. In his formative years, he was educated in New York City and later attended West Point, finishing second in the 1838 graduating class.

After serving well in the Mexican War, Beauregard remained in the U.S. military until February of 1861. Beauregard understood and believed in the Confederation established in 1776 and fought to preserve this form of government serving in the Confederate States of America Armies. Affirmatively answering the call of the new Southern nation, he served as second-in-command under Joseph Johnston in the defense of Charleston, South Carolina; which ended in the bombardment of Fort Sumter in April 1861. He was also forefront at First Manassas, most remembered for the mass retreat of Federal forces back out of Virginia. General Beauregard openly questioned President Jefferson Davis' reluctance to have Southern forces follow retreating forces back to Washington, D.C. This battle highlighted mass confusion caused by similarities in the flags of the confederate and federal armies. Beauregard was a leader in the effort to change the Southern Battle Flag, eventually settling on the Confederate Battle Flag, with its traditional Christian Cross of St. Andrew as its centerpiece.

Beauregard loyally served the Confederacy throughout the war, seeing action under Albert Sydney Johnston in the Western Theater, supervised Charleston's defense in 1863 and 1864, participated in the Second Battle of Petersburg in 1864 impeding capture of Richmond, and the attempted halt of Sherman's plunder in Georgia and South Carolina near the war's end. After the war, Beauregard worked in the private sector as superintendent of the New Orleans, Jackson and Great Northern Railroad and later as President of the New Orleans and Carrollton Street Railway. Later in life, he was involved with the Louisiana Lottery and the Louisiana State Militia. In 1893, P.G.T. Beauregard died at the enviable age (for his era) of 74.

During reconstruction, Beauregard was an early proponent of equal rights for all races in the Louisiana unification movement. This movement was a coalition made up of prominent white and black New Oleanders promoting integrated schools, public places, and transportation, and voting rights for black men, two years before Congress' Civil Rights Act of 1875. "I am persuaded that the natural relation between the white and colored people is that of friendship," Beauregard proclaimed in an 1873 address published in The New Orleans Republican and The Daily Picayune. "I am persuaded their interests are identical; that their destinies in this state, where the two races are equally divided, are linked together; and that there is no prosperity for Louisiana which must not be the result of their cooperation."

Beauregard was offered the command of several foreign armies, including the armies of Romania and Egypt, but was unable to negotiate the terms to his satisfaction. In 1872 he helped found the Reform Party in Louisiana, a coalition of moderate Democrats who supported civil rights, including suffrage, for African Americans. In 1873 he helped form the Unification Party, which sought to lower taxes with the support of the black vote. The party's advisory committee included an equal number of white and black members, the white contingent consisting of influential businessmen and lawyers, the black contingent of Creole men who were freemen before the war. Their platform included an end to employment discrimination and segregation, but the party lacked popular support and collapsed. Beauregard served as commissioner of the New Orleans Lottery (1877 to 1893) and in 1879 was appointed Louisiana's adjutant general. In 1888 he was elected New Orleans's commissioner of public works.

Hopefully I've made the case for why we hold the good general so dear here in my District. Beauregard High School, a public high school in Lee County, Alabama, was created in the 1890's. Originally the Whatley School (named after Louis A. Whatley, the donor of the land it sits on), it went through a few consolidations with other schools in the same general area. In 1928, at the request of Southern-history buff, Mrs. Dolf Parker (originally known as Kate Grimmett), the school was renamed Beauregard High School. At the Battle of Shiloh, Beauregard became known for the "Hornet's Nest," the greatest known concentration of artillery in American warfare at that time, thus Beauregard High School became known as the Hornets; the school I proudly graduated from in 1988 and once held my family name before the current Beauregard nomenclature.

If the city approves, we would be honoured to provide a plaque in gratitude for the generosity of allowing one or both Beauregard and Lee statues be relocated to their namesakes in Alabama. We would like to preserve the truth of an American idea championed by this exemplary Confederate general who stated, "I am equally convinced that the evils anticipated by some men from the practical enforcement of equal rights are mostly imaginary, and that the relation of the races in the exercise of these rights will speedily adjust themselves to the satisfaction of all." I personally would be most very grateful if you and your city could do this for me and my constituents in Alabama and make it a common bond to promote future economic benefits between NOLA and Beauregard, Lee County Alabama.

Well done Senator Whatley! It is easy to see why Landrieu demagogues want reminders of this sort exiled from their city. What courage it took for P.G.T. to stand up to the big govt. Democrats and occupation Republicans of his time - imagine if his Reform Party movement had been successful instead of "progressing" into the result which followed. Mitch likes to evoke what one can tell to little African American girl in fear of this statue. Here's what I would say.

David Duke and Mitch Landrieu are different sides of the same coin - both on the wrong side of history destined to collapse as do all command economies once they've run out of wealth. The big govt. results they champion will harm anyone wanting to be a responsible, free and productive citizen in control of their destiny. Just as the Battle Flag, Christian Cross and other symbols have been coopted and used to advance evil, so have these statues by the Duke & Landrieu types. The high watermark of the Klu Klux Klan used the 48 Star US flag more than any other symbol. I pray you can see the Spirit of the 15 Star/15 Stripe Star Spangled Banner however muffled in the flag of hegemony is still there and appreciate what good men like Beauregard tried to do knowing the Duke & Landrieu type demagogues will always be waiting to use their good name and efforts to cloak their using government to take your wealth and Spirit. The African American slaves who fought for the Continentals in the American Revolution seeing through Britain's offer of freedom sensed there could be something better; similarly the African Americans who fought for the Confederacy sensed there could be something better where a State/country could operate free of empire. Some blacks of military age in New Orleans who wanted to join the Confederacy were turned away early in the war when many foolishly thought it would be a short endeavour. Gen. R.E. Lee understood the folly of also turning away these good men as did the Union Armies until it was clear the seceded States would be difficult to conquer. I know it is difficult to imagine the 'natural relation of friendship' Beauregard desired given what the progressives have done in fact these past several score while claiming to care about the general welfare to cloak their special interests and avarice.

Don't fear the cross because it has been misused by apostates; don't be terrorized by historical figures because they've been vilified by charlatans and deceivers; don't judge a flag by the stripes and colours instead look for the Spirit and content in the actions of the bearer. Many have and continue fighting to get the Battle Flag out of the hands of the progressive racists using it to advance their ends. Most importantly, when all the flags, monuments and other undesirable symbols are removed and little is changed, remember the Duke & Landrieu types who used these symbols to their own end instead of labouring on the real problems you face which they either do not really care about or are far too inept to address. No doubt it will be difficult, I think Coretta Scott King said it best, "Freedom is never really won. You earn and win it every generation."

Learning history is not easy and often ugly - but then you come across a gem like P.G.T. Beauregard to show the Duke & Landrieu types for the frauds they are making it worth the effort. I hope you also take delight discovering the first black aviator in the US was female, the first woman to run for President African American! I close in prayer you do not have to suffer those who use you to cloak their avarice proffering a legacy of ignorance and want Dickens warned of as the path to doom.