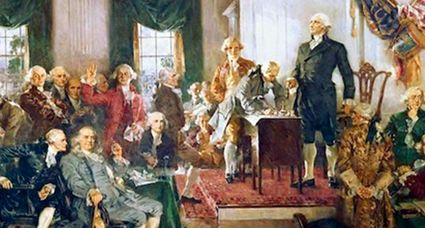 An Independent People are Wholly Dependent upon God

. . . because the creation itself also will be delivered from the bondage of corruption into the glorious liberty of the children of God.

I will walk at liberty, for I seek Your precepts.

The Pennsylvania State House was hot, humid, and charged with emotion as representatives for the thirteen colonies came together in June and July of 1776 to consider severing their allegiance to their mother country, now considered an oppressive government. They pledged their lives, fortunes and sacred honor and risked conviction for treason in order to gain liberty for themselves and posterity. On July 4, 1776, the Unanimous Declaration of the Thirteen United States of America was passed unanimously. Eleven years later, the Constitution was framed, based upon its principles.

These dates are more important than most of us realize. On July 4, 1776, a nation was born, whose citizens have enjoyed a greater degree of civil liberty than any other previous nation in history, since the nation of Israel in the Old Testament.

Samuel Adams, called the Father of the Revolution, after signing The Unanimous Declaration on August 2nd said that:

We have this day restored the Sovereign to whom all men ought to be obedient, and from the rising to the setting of the sun, let His kingdom come.1

Is it true that with the birth of our nation, the Sovereign God was restored to His rightful place in civil affairs? Did this act allow His kingdom to come on the earth in a fuller measure than previously? Let us explore these questions more fully.

Take time to read the actual document and examine how its principles are timeless, giving us wisdom for the restoration of our great nation.

In addition to the indirect references to God and Biblical principles, there are four direct references to God in The Unanimous Declaration. The first reference that we come to is the phrase, "laws of nature and of nature's God entitle them . . ." This is a powerful statement indicating God as the Supreme Lawgiver. The "laws of nature" refer to the laws that God made that apply to all men, that can be known even if one does not have God's written revelation.

These include laws against murdering or stealing. This natural law condemned Cain for killing his brother, many years before God put in writing, Thou shalt not murder.

The "laws of nature's God" refer to the law of God as codified in the Bible-written revelation. America's founders taught that men were to be subject to the Supreme Lawgiver and to His Law, His Word. They knew that only then would the Lord, the first Founding Father, bless this new nation. As George Washington stated in The First Inaugural Address, "the propitious smiles of Heaven, can never be expected on a nation that disregards the eternal rules of order and right, which Heaven itself has ordained . . ."2

Volumes have been written on the preamble to The Unanimous Declaration, particularly concerning this sentence:

We hold these truths to be self-evident, that all men are created equal, that they are endowed by their Creator with certain unalienable rights, that among these are life, liberty, and the pursuit of happiness.

The truth that all men are created equal is derived from the Bible, and for the first time in history, an attempt was made for a nation to live by it. We also observe that the authors of this document declared their belief in and reliance upon God, the Creator. This is a powerful affirmation, for He who creates must also sustain. This is why they often referred to God as their provider by calling Him Providence. Finally, they also indicated God as the all–powerful Creator who alone is the author of rights, which (since man does not grant them) cannot be taken away. This was a deliberate and bold break from the past, for in the history of mankind, civil government always established itself as the grantor of rights.

Thomas Jefferson once stated, "God who has the power to force us to do His will, didn't." The essence of tyranny in civil government is the abuse of power. The next section of the Declaration lists the abuses of King George. The list is quite extensive and makes very interesting reading, especially in light of the historic parallels. If we were to bring similar charges to our civil governments today that are exercising powers beyond their Biblical jurisdiction, we would have quite a long list as well. Let us enumerate a few examples,

1. Demanding an application of the "separation of church and state" that

effectively denies many public expressions of Biblical Christianity such \

2. Favoring non-Christian expressions over Biblical ones

1. Persecuting, harassing, and in some cases closing down Christian

2. Forbidding Bible studies, prayer, or other expressions of Christianity

2. Executive orders that greatly expand the power of the executive branch beyond its constitutional limits

usurping the rights of parents

Harming The Citizens Through Policies And Practices

1. The establishment of public schools producing millions of functionally

2. Overstepping its jurisdiction and passing many laws thought to protect us (seatbelt and helmet laws, mandatory vaccinations, minimum wage

1. Interfering in the free market in myriads of ways

2. A taxation rate that is way beyond what is Biblically considered

effectively steal from some to give to others

are diligently inculcated on a daily basis

2. Taxpayers forced to finance such things as government schooling,

3. Removing rights of health care providers to refuse to perform

procedures to which they are opposed

God Is The Supreme Judge

ultimate and supreme Judge, who is judged by no man, yet stands in judgment of all, including civil rulers and governments. When it was stated that they were appealing "for the rectitude of their intentions," this indicated that they believed that they were declared righteous; that is, that they were acting in accordance with God's Word and the King was not.

The Unanimous Declaration was as much a declaration of dependence as it was a declaration of independence. God used Dr. John Witherspoon, Presbyterian pastor and later President of the College of New Jersey, to add the phrase with a firm reliance on the protection of Divine Providence. This indicated that their hope and trust in this life is not in man but in a God who cares for His creation and watches over all, ordering their steps and intervening in their lives. We know that God did intervene many times during the long war to finally win their independence. They repeatedly acknowledged the evident protection of God. In so many circumstances they would have been defeated had not God miraculously intervened. Washington at one point was prompted to acknowledge this:

Finally, they continued to act according to Biblical covenant as they vowed to,"mutually pledge to each other our lives, our fortunes, and our sacred honor." Of the 56 signers, many of them would soon lose their lives, and many would have to forfeit their wealth. There is a cost to liberty, and they were more than willing to pay it.

Liberty Still Needs To Be Purchased

Liberty has never been and never will be free! John Philpot Curran, Irish statesman and orator stated,

the active. The condition upon which God hath given liberty to man is

eternal vigilance; which condition if he break, servitude is at once the

consequence of the crime and the punishment of his guilt.4

As Biblical Christians, God is holding us responsible for the stewardship of the liberty He has given us. Accordingly, there are questions that we need to ask ourselves continually:

1. Do I understand God's view of liberty, both internal and external?

2. If so, am I willing to submit myself to Him, that I may walk in liberty?

3. Do I have the heart of God for the liberty of my posterity? Based upon my actions today, will my children, grandchildren, and succeeding

generations, have a greater degree or lesser degree of civil liberty?

4. What is God asking me to do so that this generation and the many

to come will walk in the glorious liberty of the children of God?

4. George Stimpson, A Book About A Thousand Things (New York, NY: Harper and