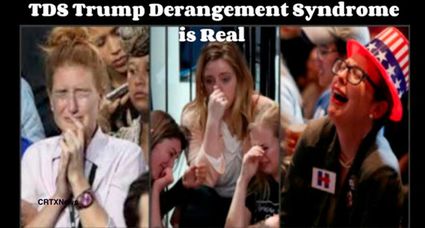 I had a professor while I was working on my Masters who once told me to never write when I was angry. Through the years, I have generally heeded this advice. Once in print, those words are never going to disappear. This week has been one of those angry political weeks and I have intentionally stayed away from my computer wanting to calm down before putting thoughts on paper. But a deadline is a deadline. I wanted to write but my anger was at such a fever pitch that I had to put this Robservation on the back burner for several days. Did it help? Not a lot, although this version is infinitely tamer than versions 1-5. Why? Glad you asked. Because every day, this topic is staying in the news and we cannot get away from it.

Facebook Drama! When I first heard the term TDS, I thought it was kind of funny. After the past weeks, however, I am convinced that it is actually a real thing. People hate President Trump so much that no matter what he does, he is a villain. Sarah Sanders said it best when she said that Democrats are going to have to decide whether they love this country more than they hate President Trump. Imagine the headline, "Trump cures cancer!" The liberal, fascist response? "That b_stard is putting doctors and nurses out of work. Imagine all the folks in big pharma! What about them?" Trump signs a deal with North Korea. "How dare he talk to that despot!" Uhhh, I remember several months ago, the same idiots were lambasting the President for talking too roughly about North Korea. He sits down and negotiates with Kim Jong Un and he is still the bad guy. Robert De Nero stands up at the Tony Awards last week and says, "I'm going to say one thing: F*** Trump. It is no 'longer down with Trump,' it's F*** Trump." As if that were not bad enough, the entire audience of self-absorbed millionaires applauded wildly. Can anyone imagine if a conservative said the same thing about Obama while he was in office? Heck, Rosanne Barr lost her show for much less and yet we have people openly cursing the President, comparing him to an Orangutan, making images of him beheaded and nobody in the media, other than Fox News, says anything about it. Just google the words of acting hack, Peter Fonda and what he said about the President's son, his wife and Sarah Sanders. Disgusting. But luckily, I think the Secret Service will be paying Mr. Fonda a visit shortly. The blind hatred of these people is increasing daily and is at a level never before seen.

My wife and I have a friend whom we have known since 1987 when we first got to Germany. My wife and I were two goofy "kids" on a new whirlwind adventure overseas and our friend "Gladys" and her husband "Corky" were the much older, mature and seasoned professionals. I was just a 1Lt and her husband was a prior enlisted, senior Captain making me about 15 years his junior. They kind of took us in and helped us out a lot our first two years there. Almost every Sunday after church was a great get together at their house. Well, Gladys has been posting these incredibly ridiculous anti-Trump things on Facebook and the other day I couldn't stand it anymore. "Gladys, do you really believe all this crap you are posting?" Now enter WWIII. Wow! After a huge back and forth, I have finally had to tell her that I am not going to argue anymore because I value our friendship too much. Besides, when I fight, I fight to win. I don't fight to fight. I have lost or alienated more than one friend or family member after one of my debates. If I am going to debate someone, I generally crush them without mercy because that is who I am. And I really hate to say this but TDS has completely taken over her thinking like one of those mind-controlling earwigs from "Star Trek – The Wrath of Khan." Fighting with pure emotion, devoid of any real fact, is the surest way to get your head squashed by me.

But all this leads up to the current debate with the illegal immigrant kids on the border. Unlike my friend Gladys said, I am not a monster and yes, I do have a heart. But I have to say that I am thoroughly miffed at the predictable turn this argument has taken. Let's take the words of the always vocal and seldom intellectually honest Elijah Cummings (D) MD from a couple of days ago. "Even if you believe immigration should be halted entirely we all should be able to agree that in the United States of America, we will not intentionally separate children from their parents, we will not do that. We are better than that. We are so much better. We should be able to agree that we will not keep kids in child internment camps indefinitely and hidden away from public view. What country is that?" Where was his outrage and crocodile tears when Obama was in charge? https://www.realclearpolitics.com/video/2018/06/19/cummings_blasts_republicans_for_child_internment_camps_at_border_what_country_is_this.html

Then we have the always clueless and never intelligent Nancy Pelosi saying that Trump's executive order reuniting families has not gone far enough because "federal immigration officials should not be detaining and prosecuting border crossers at all." Really, Nancy? Just let anyone and everyone come into our country whenever they want? This coming from the brainless Californian who said a way to cut down on illegal border crossings was to cut the grass so they couldn't be smuggled through it. SIGH!! Then she pontificated, "The President's Executive Order seeks to replace one form of child abuse with another. Instead of protecting traumatized children, the President has directed his Attorney General to pave the way for the long-term incarceration of families in prison-like conditions." I have often wondered how she finds her way home at night. Hmmmm.

This sudden uproar sickens me because this has been going on at our border for years. Years! Administration after administration has chosen to do nothing but now it is somehow President Trump's fault. Trump is evil! Trump is the Devil! Trump is like Hitler! Yes, my friend Gladys actually said this but a carefully crafted argument I demonstrated exactly how Obama, except for skin color, was closer to Hitler than Trump is. Trump is putting these kids in "concentration camps." No, their irresponsible parents, or those posing as parents, are putting them there by breaking our laws. I saw some scrawny snowflake on the news this morning saying how we should not have borders, how we have to let everybody in and that Trump's executive order was worthless because he is just covering for the crisis he himself created. If I could have reached through the television and throat punched this punk into his safe space, I would have. He is repeating the same garbage my friend Gladys spouted and I have seen on television again and again by the leftist that none of this ever happened until Trump came into office. I got one for you: Shut up and do some reading!

Let's cut to the chase here. Many of the lazy and dare I say worthless members of Congress have had dozens of years to rectify this problem but instead they have sat on their butts deciding which Confederate Memorial to tear down next, what school to rename, what stupid fish to save at the expense of California farmers or what additional gun law they need to create. No. This is your bailiwick, fix it!! Instead, you have the bloated Cummings and his ilk demanding President Trump sign an executive order to change the laws already on the books. Then today I heard some idiot Democrat arguing that President Trump can't sign anything without them seeing it? Another, as advertised, is threatening to sue Trump for overreach. What the hell is wrong with these people? They won't do their job, they blame Trump for a law he didn't create, insist he sign an executive order and now some are saying Trump is trying to be a dictator because he just signed an executive order they wanted supplanting existing law. To these people, term used loosely here, there is nothing President Trump can do to satisfy them.

Record low Black and Hispanic unemployment, stock market surging, overall unemployment at decades low, potential peace in North Korea, GDP approaching 4% - you name it. Just Google Trump's successes in his first 500 days. Here is the bottom line before I get too angry again.

1. Something needs to be done at the border. I will give you that much. But what? I don't know. I do know that allowing every human being on planet earth to come here is not the answer. Sorry, Nancy.

2. President Trump did NOT create this crisis at the border; others did and many others sat by and did nothing for years.

3. The cost of illegal immigration to our country is increasing and unsustainable. As long as we have elderly American citizens unable to afford healthcare and basic necessities and American veterans who are homeless, committing suicides daily and seeking medical care from

the VA and not getting it, not one dollar, NOT ONE needs to go to any

illegal immigrant. Sorry, my people, all Americans, come first in my world. Take a look at the following link: https://www.fairus.org/issue/publications-resources/fiscal-burden-illegal-immigration-united-states taxpayers. It will give you a true picture of the real cost of illegal immigration at the state, local and federal level. If that doesn't anger you, nothing will.

4. There is currently no foolproof way to verify that these kids coming across the border are actually the children of the accompanying adults. Fact. Human trafficking is big and many of the immigrants who have already shown they have no respect for our laws will have little respect for some the children they are bringing across the border. Not to mention there are some nine consulates and an embassy in Mexico where these people can go to seek asylum. They do not have to come to our border, but of course, that would turn attention away from the leftist agenda.

5. This did not become an issue until the latest economic statistics came out clearly demonstrating the successes of the Trump administration. The

leftist have nothing else but to conjure up these crises on an almost weekly basis. They are persistent, I have to give them that.

6. Finally, the surest way to ensure these children are not separated from their parents is of course not to sneak into our country illegally. Imagine that.

Yes, Gladys. I have a heart but it is inextricably tied to my brain and the rule of law. To condemn our president for upholding laws already in place is the true mark of the hysterical socialist and anarchist movement within the People's Democratic Party. Let's force Congress to get off their butts and do their jobs instead of kicking the proverbial can down the road even further. Hand the President, within 30 days, a bill he can sign into law. Don't denigrate him for the mistakes of others and for not upholding the laws his oath is requiring him to protect.

For example, House Minority Leader Nancy Pelosi said the executive order does not go far enough because federal immigration officials should not be detaining and prosecuting border crossers at all.

Pelosi said in a statement:

The President's Executive Order seeks to replace one form of child abuse with another. Instead of protecting traumatized children, the President has directed his Attorney General to pave the way for the long-term incarceration of families in prison-like conditions.