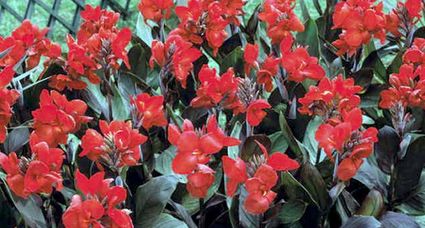 The dog days are upon us which usually conjures up hot, sultry days and nights. The term is of ancient origins. The Romans called these humid days "dies caniculares" which they associated with the Dog star, Sirius, the brightest star in the constellation of Canis Major (large dog). This constellation is prominent in the skies this time of year. And speaking of stars, let's look to the garden to see what star is sparkling during these "dog days".

Most summers the beds sparkle with masses of vinca, white, bright pink, or red, but this summer vinca has been a disaster. Even with the Sprinkler systems off, the vinca has lliterally rotted in the ground because of all the rain. Vinca prefers a drier condition with plenty of sun. Begonias just disappeared with the rains. Also my lamb's ears have all but turned ash gray with soggy boggy leaves. But all is not lost. My stars are salmon dwarf canna lilies, yellow canna lilies, and bright orange canna lilies. Also, Pacific Giant zinneas are blooming their heads off, ginger lilies, both the white and peach, have made a great showing, and my old fashioned phlox have been terrific. Plumbago and other woody stemmed tropicals have performed well under these conditions since they do not need full sun. I planted a clump of bright yellow Inca marigolds just for accent, and wish I have planted more. They love wet feet and have thrived with all the rain, but had to dead head them more often. Another star has been Torenia or the wishbone annual, mainly the dark purple variety.

I have many types of herbs in pots that I use constantly in the kitchen Over the years, the herbs that have performed the best are those I started from seed. Many times and many dollars later I have noticed the herbs purchased in garden centers bolt much earlier than the seed grown ones. I have heard that some nurseries put growth retardants on the plants so they will last longer and look better in the flats. Chives are very easy to grow either in pots in beds. They do multiple year after year, so thin them out before they become too invasive. Any type of basil, fennel, dill are easy to grow from seed. Parsley both the flat and curly is also in that category. Parsley is a biennial which flowers the second year and sets seed. Let the seed heads dry, and gather for sowing next year. If Parsley is grown in the garden, just let the mature seeds drop and the seedlings will volunteer the next year. I have grown thyme, oregano, sage, cilantro and even tarragon with much success. One note is that cilantro does not last too long in our summer heat, but you can sow a succession of seed every couple of weeks and you will always have plenty for your favorite Mexican dishes.

Another tip about herbs is that the more you pick them the bigger they grow which means more to harvest and share with friends. Pick the herbs very early in the morning for the most robust flavors, then keep their stems in a glass of water until time of use. Butterflies and bees, plus beneficial insects are very attracted to all types of herbs. So love a butterfly and plant herbs.

Today it is recommended to use this chemical sparingly, so what can we do about weeds besides man handling them out of the ground. Recent research shows there is a more environmentally safe spray that after one or two applications was as effective as Round Up and much cheaper. It is COMMON VINEGAR which has about 5 percent acetic acid. Vinegar was pitted against the commercial acetic-acid-based weed killers named Nature's Glory Weed and Grass Killer, and BurnOut Weed and Grass Killer. The research plots were sprayed three times, and all the weed killers tested showed a 95 percent control, including common table vinegar. However, for best results one would need to reapply every five weeks for best control.