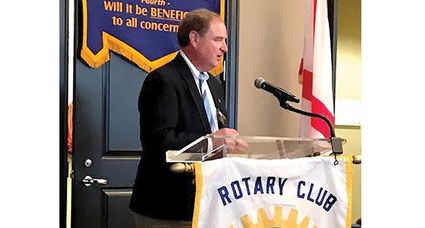 A "JOIN THE ROTARY REVOLUTION with SAMUEL ADAMS" banner greeted family, friends and distinguished guests to celebrate the investiture of Rotary District Governor Samuel Adams at the Capital City Club in downtown Montgomery on June 29.

As guests arrived, they were treated to some lovely classical music from the Rosewood Quartet led by Rotarian and MSO member Clare Weil. A capacity crowd enjoyed the libations, a plated dinner, conversations and some spectacular 360 degree views of the city, the river and the sunset.

Sam is a member of the Montgomery Rotary Club, founded over 100 years ago. The club enjoys over a 100 members who contribute to Montgomery's success and well being, abiding in Rotary International's (RI) motto of "Service Above Self". Montgomery's President Elect Graham Champion emceed the evening's activities which included recognizing Sam's family, past District Governors and city and state officials. It included a proclamation from Governor Kay Ivey, also a member of the Montgomery Club, honoring Sam for his past contribution to Rotary, the City of Montgomery and the State of Alabama and wishing him well for the upcoming year.

Sam shared with the audience his vision for the upcoming year which included District support for communities and worthwhile projects that would benefit all citizens. He mentioned two of just hundreds of examples: The recently completed Rotary Dog Park for Montgomery downtown residents (project cost approx. $75,000) and a Rotary splash pad in the City of Enterprise (project cost approx. $100,000). both projects included the collaboration of Rotary and non Rotary partners.

Beyond regional interests, DG Sam discussed Rotary's 40 plus year commitment to end polio world wide. The effort has reduced the number of reported cases from 350,000 just 40 years ago to less than 20 found in only a couple of countries in the Middle East. Sam highlighted Rotary's six areas of focus which leads Rotarians and its partners to contribute resources around the world to improve mankind.

Sam briefly touched on his stated goals for the year which include running two miles at every club to raise awareness and funds for the End Polio Now campaign.

He announced a joint venture with the northern district of Alabama to sponsor a statewide financial literacy program in conjunction with the Alabama Council of Economic Education, headquartered in Birmingham. The Stock Market Game will reach over 10,000 student in schools across Alabama teaching valuable business and ethical lessons.

Over 500 Rotarians will convene in Montgomery in

The Montgomery Rotary Club is the oldest Rotary club in District 6880 having been formed in 1913. Its long and storied history includes state and local leaders from all sectors of society. Thomas L. Hackett was its first president.

In 1913, what was then District 5, included all of Alabama, Georgia and Florida. By 1916, past president Ralph Quisenberry became District Governor and led the way for the extension of Rotary into Cuba.

Since then over a dozen Montgomery Rotary Club members have become District Governors including Algernon Blair who served as a Rotary Director for Rotary International in 1934-35.

The Club now boasts of over one hundred members. Its extensive array of public service projects include everything from founding Camp ASCCA 42 years ago to last year repurposing Rotary Park downtown into a state of the art dog park for residents and their pets.

While political messages are banned from entering the Rotary arena, politicians are not. Governor Kay Ivey, Treasurer Young Boozer, Commissioner John McMillan and Justice Tom Parker presently serve as state constitutional officers and enjoy active club membership. This group may be the highest concentration of state political leadership throughout Rotary's 7,800 clubs in the United States.

Current District Governor Samuel Adams will host approximately 500 Rotaria leaders from14 states and 26 districts this October for a Rotary Institute that will include the incoming International President, Mark Maloney, an Alabama native.

The Montgomery Rotary Club is forging into this new century with vibrant ideas, a youthful focus and a determined resolve to attract members with a vision to unite people in our city in order to take action to make a positive lasting change. The Montgomery Rotary meets Mondays at noon at the RSA Activities Center on Dexter Avenue.