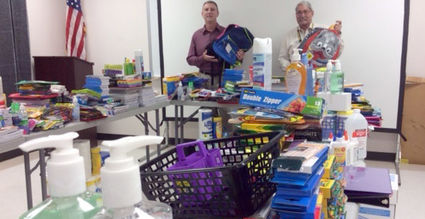 The Autauga County Sheriff's Office held a "Fill the Patrol Car" with school supplies campaign during the month of July.

They set up at participating Dollar Generals in Autauga County collecting supplies and donations.

All the supplies were divided between the rural schools and the donations were used to purchase missing items and additional supplies to make each delivery equal.

After school started the Sheriff visited each school and delivered the school supplies. Each school was very pleased to have the additional supplies and said they would be given to the children in need.

It take a community to raise our children and the Sheriff's Office is just doing their part. We would like to thank everyone who came out and donated supplies and money to this campaign.

We would have been successful without your assistance and support of the Autauga County Sheriff's Office.

P.S. All the supplies given would have filled the patrol car and a whole lot more!