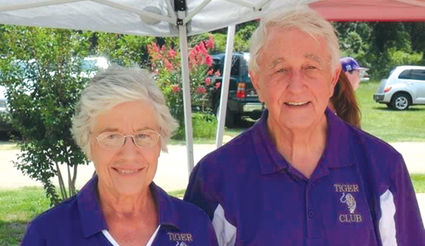 Judge Segrest is looking forward to retirement after years of community service and dedication to justice.

Now is a new time for family, friends relaxation.

Agape. Wikipedia defines agape as a "term referring to love, "the highest form of love, charity" and "the love of God for man and of man for God".

You will find him most days in the garden. Toiling over each plant with intentionality. A job that was once a hobby now has new meaning. The garden that he pours his time into has become what some would refer to as an "agape garden." Judge Segrest is no stranger to gardening, a way of life growing up and later a past-time he shared with his sons and wife. I follow him on social media. I see the graciousness in the eyes of a man who has served and continues to serve well. I see the love for a community displayed in his every act. I've walked the rows with him. He's detailed. He shares life stories. I see the plants he's growing to share with others as a sign of his unending love for a place he's invested his life in.

Judge Dale Segrest originated from Shorter, AL, where he attended school with his beautiful bride, Betty Menefee, beginning in the first grade. He attended Huntingdon College for his undergraduate, majoring in Mathematics and Chemistry. He married Betty in 1964 after graduating from Huntingdon. He earned his law degree at the University of Alabama School of Law and a Master of Judicial Studies degree from the University of Nevada at Reno, where he completed his thesis on Punitive Damages in Alabama. He began practicing law in 1967. Judge Segrest was elected as the Alabama Fifth Circuit Court Judge for 18 years in the State Of Alabama. He served Macon, Tallapoosa, Chambers, and Randolph counties. Judge Segrest decided to begin a private practice in the county that he had served. He bought a historical home in Macon County, did an extensive restoration of the home and began his practice there, the day after he left the bench. He expanded his law practice and established a branch office in Tallassee in 2001. He has had a successful career in law over the last 51 Years. His love for politics has trickled into the lives of his children and has made a profound impact in his home. Both of his sons practice law. His namesake, Philip Dale practices law in Chicago. His son Mike is now running for election on the November ballot for the elected office his father once held. A legacy of law created from a man who devoted his life to serving others.

Judge Segrest tried a case for the last time this past week. He took a step in the direction of the much deserved retirement in his near future. Judge Segrest said this about his departure from the world of law, "Retirement party had to be a BBQ! After I settled in to law practice in Tallassee, I helped start the Tallassee Now! Event as a BBQ event and it is now our biggest event of the year! I organized the Tallassee Community Development Corporation and it has helped with lots of fundraising: high school proms, volunteer fire departments, Wall Street Senior Citizens, Scouts, bands, wrestling, Cheerleaders: several hundred thousand dollars! Cooking BBQ like Uncle R. V. Segrest taught me, and camp stew like Aunt Ruby used to make worked miracles. Join us on

October 20 at 4:00 PM at my place on Lake Tallassee: 463 Riverside Drive. Retirement party for me and campaign party for my son Mike! Let's get him elected to my old office!"

Thank you Judge Segrest. Thank you for planting seeds and sharing your talents, gifts and love with everyone you meet. Thank you for showing Tallassee the true meaning of the greatest from of love.

The Alabama Gazette wishes to thank him for his involvement as a contributing writer for the Gazette for several years and his support of the Tallassee Quarterly.

We wish you the best!