Pundits of the food industry and marketing have released their food trends for the upcoming year. Much of which is the same as last year. Healthier food is always an up and coming trend. Some of the trends were trendy in the past, then lost some of their appeal, and are now becoming trendy again.

An example is tea. There are three cups of tea consumed in the world for every cup of coffee. Nevertheless, in the United States tea is making a comeback because of its health benefits. The health benefits are the rich antioxidants that fight inflammation and help prevent blood vessels from hardening. Tea is also known to boost brain health. A study in 1982 said drinking tea lowered the absorption of iron. However, with the addition to your diet of iron-rich plants and vitamin C rich foods will offset the impact. Foods like bell peppers, Brussels sprouts, kiwi, and strawberries. Tea also has lower caffeine levels then coffee. The main problem with tea, especially in the South, is sweet tea. We load it up with unwanted calories. But what else quenches your thirst on a heat muggy afternoon as much as a large glass of iced sweet tea.

Another trend is the push for fermented foods. Kimchi, pickles, sauerkraut, and kefir have found their way into trendy eateries along with new items that will be fermented, cooked, and offered to customers. The aim is consuming the least processed food while increasing probiotics to improve the immune system. You do not have to go to a trendy eatery to experience the benefits of fermented foods and probiotics, dine at a Korean restaurant.

Remember when kale was the craze? Kale is losing it's shine and sorrel, dandelion greens, and amaranth are now in. I am still waiting for the return of Poke Salat. Hide your agave and honey. Sweetening from carrots, sweet potatoes, and golden beets byproducts are in the making. Sounds like food engineering and artificial sweetening to me. I will stick to my honey and agave.

There is still a push for so-called super foods. These vegetables and fruits are high in their nutritional qualities. Asparagus, beets, and Brussels sprouts along with the fruits, apricots, papaya, and pears are becoming front center in restaurants and grocery stores. The last pear I ate was peeled, cored, out of a can and cut in half and sitting on a bed of lettuce. It had a dollop of mayonnaise and a sprinkle of shredded cheddar cheese on top. Brown rice, quinoa, walnuts, and flaxseeds are finding their way into other foods. You can have your sushi with brown rice and the oatmeal I eat has flaxseeds in it. The focus on color is used to re-introduce some of these items into your diet and to pique the interest in children to try something different. They are finding or making veggies in not normal colors. Blue and purple are rare colors for most foods, so arriving in greater numbers are purple potatoes, and purple cauliflower.

You can be as trendy as you want, but you cannot find all of the items you want all year long. There are seasons and the items that are in season are plentiful, taste better, and usually more nutritious. When I was the Garde Manger at a banquet hotel, there were two times in the year when grapes were not available, or very expensive, or of poor quality. That was when the season for grapes was either just beginning or just ending in the United States and just the opposite in Chile. If you manage your menus according to what is plentiful at that time you get better quality and cheaper prices. If you take into account the seasons and what is trending right now, you can produce some great meals that will impress your family and friends.

December has a varied mix of seasonal vegetables and fruits. Apples and cranberries are what I see in most menus during this time but chestnuts, clementine's, passion fruit, pears, pineapple, pomegranate, satsumas, tangerines, and walnuts make welcomed alternatives. So are beets, Brussels sprouts, cauliflower, celery, leeks, parsnips, carrots, potatoes, pumpkin, red cabbage, and turnips. This does not need to be limited to fruits and vegetables. Meats, poultry, and fish have seasons with these being available; clams, duck, goose, haddock, halibut, lemon sole, monk fish, mussels, oysters, scallops, sea bass, squid, turbot, and of course the overused turkey.

If this is overwhelming for you to decide what to fix for dinner, get three darts and make three lists from the items mentioned. One marked VEGS, one marked FRUIT, and one labeled MEATS. Tape the list to a corkboard and use one dart for each list to find out what you will eat.

If you hit pineapple, squid, and turnips throw again!

At every potluck dinner party I attend, I see a store bought or at least an attempt to make an edible crudité platter. If you are going to make a vegetable platter, remember to look for and use the produce that is in season. Your platter should be the showcase of the buffet table. Not something just to fill up space. Do not make a list before hand of the vegetables you want to put on the platter, wait until you get to the produce section of your local grocery store and pick the best looking and most interesting produce. Go for different colors, shapes, and textures. That also goes for the platter itself. Try another shape than round. Arrange the vegetables in some other method than all of one vegetable goes in one pile and all of another vegetable goes in another pile. Try laying the produce in an "S" pattern and interlock each vegetable together in that same pattern. I have seen platters with the vegetables arranged to look like a Christmas tree. The greenery is broccoli with radishes, strawberries, and cherry tomatoes as ornaments. In addition, have more than one dip with the platter. Make it in some other color besides white. Depending of the vegetables, you may like to try one sweet and one savory dip. A cleaned out red or orange bell pepper will make a good substitute for a bowl for the dip.

If I have shamed you into not using that 2 pounds bag of baby carrots you just purchased for your next vegetable tray, I have a solution. I have seen this recipe floating around in newspapers and cookbooks, from Texas and Louisiana and from Paula Dean to Martha Stewart. It will be a change from the same old holiday meal side dish, sweet potatoes. This souffle will be firmer and denser than the normal souffle. It does not puff up like a normal souffle.

2. Place carrots in a medium saucepan and cover with water. Add salt. Cook about 30-40 minutes or until very soft.

3. When carrots are soft, drained and slightly cooled (if using a blender), place in a large bowl and mash with a potato masher until smooth. As an alternative, puree carrots in a food processor or blender with the butter.

7. Dust with powdered sugar before serving.

This year I spent Thanksgiving in Dallas. One of my favorite activities while here, is to dine at some of the new restaurants that opened since my last trip here. I am not writing this as a review but as a stimulant to get your brain going and coming up with different ideas on how to prepare a dish differently from the way you have always prepared it. This morning, we ate breakfast at a restaurant that only serves breakfast, SNOOZE, an a.m. eatery. I would say the Benedict's and pancakes are the most popular items on the menu. My choice this morning was the egg Benedict's. Every order has two Benedict's, but you can split the order to include one of any of the other choices. So you can have up to twelve different dishes to chose from. And they had a special holiday assortment of Benedict's. I picked a dish that had a base of sweet potatoes cubes, topped with a ancho coffee rubbed hanger steak topped with a poached egg and hollandaise with a pomegranate molasses and roasted asparagus. The other was green chili sauced tortillas and melted cheese with barbacoa, topped with poached cage free eggs, green chili hollandaise, pico de gallo, and cojita cheese. I included a picture of the steak and sweet potato Benedict to show that it does not have to be the same English muffin and Canadian bacon.

If you are having guests and family staying with you, surprise them with a creation of your own.

Use different meats, breads or no breads, and differently seasoned hollandaise for you brunch Benedict.

I have a recipe I have not made in a long time. It calls for clementines and my problem is that I peel and eat them so fast that by the time I an ready to bake and serve them as a dessert, there are none left. I also never make this recipe the same every time I make it. I used clementines but the topping changes, depending on what left over Christmas cookies I have.

The amounts for the cookies, pecans and brown sugar is to your taste. Use some juice to moisten the mixture and the butter for extra flavor. 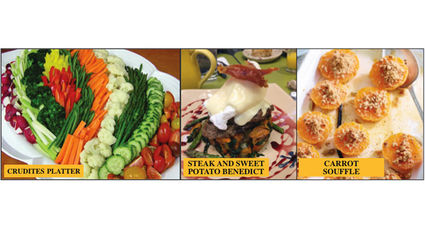 3. Mix well and add enough butter so the mixture well hold together enough to stay on top of the clementines.

4. Place the Clementine halves snugly in a baking dish cut side up.

5. Cover each half with topping and bake until the topping is browned and slightly bubbling. About 10-12 minutes.

6. Remove from oven and sprinkled each half with grated chocolate.

7. Return to oven just long enough to melt the chocolate.

8. Serve warm with a scoop of ice cream on top.