BITS AND PIECES; YET AGAIN

Hey, folks. Here we go again with another edition of "Bits and Pieces." There is so much going on right now that I would like to address just a few of them now and then perhaps expand upon some of them at a later date. Here we go!

1. ALEXANDRIA OCASIO-CORTEZ: The woman is living, breathing proof that one can make it into politics with absolutely ZERO common sense. Before anyone goes Democrat on me, NO I am not slamming all politicians. Not even close. All I am saying is that she continually says some pretty stupid stuff and she is now a politician. I must admit that I do have a "love-hate" relationship with, as my friend calls her, "From the First Brooklyn Soviet of New Rep., Leningradia Occasional-

Cortex." I actually hate every, single thing she stands for yet I love it when she opens her mouth because every time she does, we get not just an amusing soundbite but more importantly, we get a view into that vapid crevice between her ears. AND PEOPLE VOTED FOR HER????

Okay, this is hot off the press. Well, not-so hot by the time you guys read this but this remains pure gold nonetheless. Basic 5th - 6th grade stuff here, folks. The three branches of government are? Wait for it, wait for it. Got it. Executive (President), Legislative (Senate and the House of Representatives) and Judicial (Supreme and lower courts.) Done. Boom. Drop the mic!! Leningradia the other day said, and no I am not making this up, "If we work our butts off to make sure that we take back all three chambers of government: the presidency, the Senate and the House." Yes she did. She did not "mis-speak" as some have posited but she clearly had no idea what the heck she was talking about. None and now she is going to exist in one of her "chambers" and get paid a lot of money to do so. Chambers? Whaaaaaat? Although she supposedly graduated cum laude from Boston University in 2011 with degrees in economics and international relations, she has never once given a cogent answer to how the US could possibly fund any of her socialist programs. Why? Because there is no answer.

2. RED FLAG LAWS: Have you guys been keeping up with this? At the moment there are 12 states that have placed this law into practice. For those of you who may not know what this means, here is a short definition. "A red flag law is a gun violence prevention law that permits police or family members, intimate partners and mental health providers to petition a state court to order the temporary removal of firearms from a person who may present a danger to others or themselves."

Did you guys get that? Pretty subjective stuff here. This is how this plays out in reality. Somebody tips off the police that "Joe" has guns and they think he is a danger. They report him, some sycophant judge writes a warrant, SS Stormtroopers (a.k.a. cops) show up at Joe's house while he is playing with his kids in the pool and take his guns from him. No due process. No proof. Nothing but a phone call by someone who may actually just not like Joe. Does this bother anybody other than me? You know, there is this pesky thing called the Second Amendment hanging out there and yet some idiot judge is going to simply say, "Take his guns." And what is worse is that there are a lot of testicularly challenged police officers out there who should know better but are still going out and taking people's guns. Wow. I never thought I would see the day when we are embracing the beginnings of a police state here in the USA.

Of course, the inevitable has already happened. In Maryland, since their red flag law was imposed in October, by mid-November there had already been 114 gun removal requests. During one seizure, the SS Stormtroopers from the Glen Burnie Police department, killed a 61-year-old man in his house. The police showed up at his house at 0517 in the morning to serve their "Extreme Risk Protective Order" and in the process killed a guy. A couple of things. 0517 in the morning? Really? Who in the heck, knowing they have done nothing wrong, is going to respond perfectly rational after being awakened with Nazi Stormtroopers at your door at the crack of dawn? Go online and read the police chief, SS Obergruppenfueher Timothy Altomore's, defense of his hit team. Comical. He said, "Well, what did we prevent? Because we don't know what we prevented or could've prevented. What would've happened if we didn't go there at 5 a.m.?" Zieg Heil! I'll tell you what you would have been prevented, the death of Mr. Gary Willis. Left alone, statistics tell us he would have done nothing to anybody and possibly died in his sleep 20 years from now. They are trying to justify his killing as proof of their National Socialist ideology of removing weapons from the citizenry.

I'm sorry but this whole thing stinks to high heaven. No due process at all. When President Trump threw Jim Acosta out of White House Press Corp, a judge ruled that he had to be reinstated because there was no "due process." First, there is NO right for a member of the press to be in the White House. So now I cannot fire a jerk employee without due process but when taking away Second Amendment rights, this is somehow acceptable? What criteria do they use to determine whose guns get taken? If this was a Red Flag state, somebody who hated me because of Robservations could make such a call and I would have a bunch of Nazis at my front door. I do not use the term Nazi loosely like a lot people but the actions displayed by some police departments around the US today closely mirror the SS. This is one clear example.

Imagine the angry ex-wife. "Police, he's a crazy man. He, he, he has guns. He points them at people. He threatened to kill my child." No proof, no truth and the next thing you know you are face-planted in your living room, Stormtroopers are wrecking your house and some, undetermined time in the future you will have to stand before a judge, at your expense and prove your innocence in order to get your lawfully obtained weapons back. Does anybody see anything wrong here? There are those out there who say this law saves lives. Uhhhhh, not proven folks. To us who see the writing on the wall, this is nothing more than another step in the progressive left's agenda to steal all weapons. I am sure there will be more on this as time passes on. But those 2nd Amendment cretins out there, like me, let's keep a close eye on this. I will try to write on incidents like this as they appear in the news.

On the bright side, in Republic, Washington, Police Chief Loren Culp said that his agency would not enforce the state's Initiative 1639. Although only a small town with Culp and one deputy, we are going to need a heck of a lot more people in law enforcement to stand up and crush these little Nazis everywhere they raise their ugly heads.

3. HUNTING HITLER: Real quick. Just watched the final episode in Season 3. Excellent show. I watched every episode, some twice. Interesting to watch. My thoughts: 1. The guy did get away at the end of WWII. 2. If he didn't, thousands of Nazis in fact did. Not doubt, no question. They found Josef Mengele's marriage certificate from 1958 for crying out loud. 3. They set up shop in South America and in Uruguay alone, they had some 754 camps, run by escaped Nazis, through the early 1970s. 4. Declassified documents prove that the Vatican, FBI, CIA, MI6, and other intelligence organizations knew a lot of this and did nothing. Shameful. 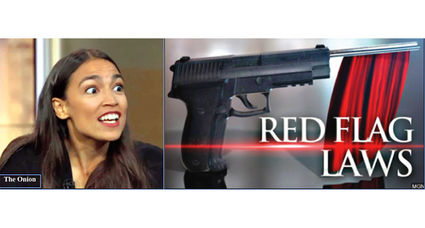 4. BIZAARO WORLD NEWS: Got this one the other day. "United States Air Force to Announce New Thunderbird Lead. Air Force spokesman, Joe Baggodonuts, announced that critical selection for the next Air Force Thunderbird lead has been concluded. 'As usual, competition for this prized assignment has been tough but we made our selection. Admittedly, it is a selection not without controversy, but we feel this pilot will make an outstanding contribution to the Thunderbirds' storied history.'" It appears that former Luftwaffe fighter pilot, Hans-Joachim Marseille was selected for this coveted position. Although killed in combat in September 1942 after 158 aerial victories, there has been no acknowledgment from the Air Force how they plan on getting young "Jochen" back into the air. When asked, Air Force Lt. General, Buck Rogers, said, "Yeah, but the kid could fly. Don't we all want to see that?" Marseille has not been available for comment.