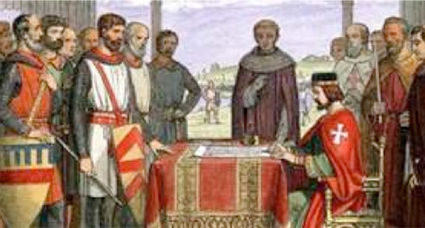 I am honored to be able to present this article by Dr. Paul Jehle on the Magna Charta.­

In my opinion, the Plymouth Rock Foundation is the number one foundation in America for its faithfulness and outreach to our True Christian History.

I married John Ames, who is a descendant of John Howland, a passenger on the Mayflower when it landed in 1620. The Pilgrim heritage has been treasured by our family for many generations.

On June 15, 1215, one of the most important events in the history of the development of civil liberty for all of western civilization, took place on the fields of Runnymede just outside London, England. Here, under the lawful act of interposition, King John signed the Magna Charta (Great Charter) for the protection of liberty under the rule of law. The Magna Charta became the standard document of liberty in England as well as the foundation of liberty in the western world.

The Christian roots of America's liberty and government were brought from England to these shores. In order to trace our roots, then we must understand England's history. The Christian history of England, especially in relation to law, liberty and government, is rooted in the Bible. One of the most dramatic portrayals of this fact is the drawing up, and eventual signing of the Magna Charta.

According to legend, it was the Galatian believers, to whom the New Testament book of Galatians was written, that took the gospel to the British Isles in the first century. The revival among the Celts is well known, and that pagan populace of what would later be known as Ireland, Scotland and England, were largely converted before the end of the 2nd century. When St. Augustine and St. Patrick were sent a century or so later, they found the Bible and particularly the Ten Commandments at the heart of its culture. Patrick put what he found into a book known simply as the Liber.

King Alfred, the only king to be known as England's "Great", translated the Liber ex Lege Moisi (liberty from the Law of Moses) and added the Beatitudes from the New Testament. His Code of Law became unique, rooted in God's Law, and "common" to both King and people, thus becoming the Common Law of England brought to America.

The bottom-up, decentralized structure of government, patterned after Exodus 18 with rulers over ten (neighborhoods), fifty (villages), hundred (counties) and thousands (burroughs or castles) was brought from England and replicated almost verbatim out of the Bible in the wilderness of colonial America. So it is important to look a bit deeper into the content and context of this momentous event, which became the cornerstone of English constitutional law and the ancestor of all the colonial State constitutions in America and eventually our United States Constitution.

When the Norman Invasion took place in 1066, and the last Saxon King Harold fought to the death at the battle of Hastings, France forced its top-down, centralized philosophy of government upon the defeated English by force. It appeared as though the world of King Alfred that featured the liberty of the individual, family and church, drawn from the Bible, was gone for good. However, when centuries of freedom loving ideas are forced underground, they only temporarily disappear under the façade of forced submission. But just as one tiny seed can split a rock, so the seeds of liberty, sown from the words of Scripture, would sprout again under the Providential Hand of God. For the next 150 years, the Christian culture of England flowed underground. On the surface, it was French, but beneath it were the seeds of liberty waiting for the moment when it would burst into the sunlight!

The individual who brought these truths into view has been lost to history. His name is Stephen Langton, and we find him in the archives of Paris, studying Biblical Old Testament Law and the ancient origins of Britain's constitution. His fame as a teacher of theology caused Pope Innocent III to appoint Stephen as the Archbishop of Canterbury. While in Paris, Stephen Langton is also credited for first dividing the Books of the Bible into chapters for easier study. He also pioneered a restoration of Canon Law that respected individual liberty.

Langton's appointment by the Pope to be Archbishop was strongly opposed by King John, the monarch of England. For years John resisted having Stephen even step within his dominion. However, John had other things to worry about, particularly his Barons. These "lower magistrates" had the lawful authority of interposing between the King's tyrannical acts and the people who were most injured by them. Pressured from within and without, King John relented and Langton arrived in July of 1213. Immediately, Langton began to mediate lawfully between the Barons and the King, teaching the Baron's what he had found in his research of the law, namely, that they must take an oath to the law and not just the King. He also let King John know that the Barons would "die in defense of their liberties." Thus, the Magna Charta was born from the pen of Stephen Langton!

The signing of the Magna Charta was an epoch in the restoration of the rule of law. It was only the beginning, however, for over the next few centuries a constant struggle would ensue regarding how to deal with Kings who refused to follow the written law. It eventually led to the other two English documents considered as part of the English Constitution – the Petition of Right (1628) and Bill of Rights (1689). The Magna Charta was referred to continually by our Founders in the United States as the cornerstone of liberty under law and the fact that all rights are given by God, not government.

The Memorial on the fields of Runnymede today reminds every tourist of the strategic development of liberty under law. It is a legacy we must remember and teach future generations. Lawful resistance to tyranny is a God-given instrument of justice, illustrated in the Bible, and practiced in history. The courage of a Stephen Langton needs repeating today as well – willing to research key ideas and providentially bring them light "for such a time as this." May God give us such leaders again; for the struggle between the rule of law and the arbitrary rule of man is the contest of our day as well!

Spent some time in the village of Bury St. Edmunds last time when we were in Great Britain. This is the city and cathedral where this world changing document was signed. Although much of the cathedral is gone, it was an honor to sit in the cradle of freedom.