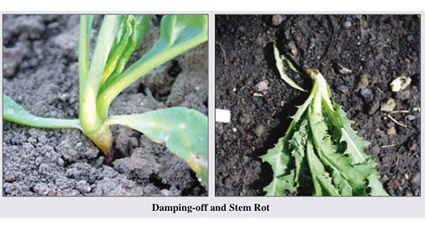 Hip. Hip. Hurrah...a brand new year is before us and I suspect we can look back and find plenty of New Years' resolutions in the offing. With the Christmas trees disposed of and decorations nestled in boxes and sacks, there is much time to reflect, not only on our lives, but on garden improvements. It is always good to assess our lives as to what can be improved upon, and the same reflection can be utilized for the garden scene. I, for one, had gotten lazy about cleaning trowels, spades, and other garden tools before putting them up for the winter. We wash them in soapy water or a light Clorox solution ( ratio of 1 part bleach to 3 parts water) so that fungus spores, and other pests, such as spider mite eggs and aphids, will not be hold over to re infect the garden soil this next year. It is always good to start with a clean slate.

For those who start seedlings indoors or in green houses during the dormant season, we can avoid disasters such as damping-off of stems, and stem rot.

Seedlings that blacken at the bases, unable to support the seedling, will fall over- dead a sure thing. It appears strange as the foliage and stems are green before the plant collapses. These lesions at the soil surface are inconspicuous at first, then girdle the plant. Damping-off is caused by fungi which dwells in the soil and can infect the seed before it germinates or can be caused by poor maintenance of the seed beds. One solution is to have the seed sown in well drained fresh potting soil, and to thin the seedling to prevent overcrowding. One of the best sowing mixes includes vermiculite, pearlite, and peat with some sphagnum moss. Another tip is to always water the seed trays or pots by setting them in water. Do not over water and give the seedlings plenty of air which will carry away the excess moisture. When thinning, use a scissors to cut them off at the ground instead of pulling them out which could damage roots. Also, avoid too much nitrogen since it causes lank, weak growth. Stem rot, is caused by a soil born fungus and also attacks the plant at the base. One sees this fatal condition usually in grown plants such as Impatiens, where the leaves turn yellow, then the plant will wilt and die. The bacteria causing this problem is Pseudomonas solanacearum and mainly soil born. It is best to remove any sickly plants, avoid overwatering, and overcrowding. If you want to salvage this mess and root the plants, slice off the healthy tops, and plant in rooting soil or water. Then discard the diseased plant and remove it from the garden area. Please remember to not compost diseased plants.

Birds in your garden can help gobble up many pests, so it is smart to feed them when food is scarce. Just a little information below gives one the common bird types we see in our area, and their favorite insects or pests: