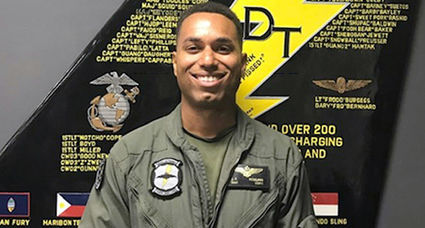 Back on 6 December, a Marine F-18 Hornet collided with a Marine KC-130 aerial refueling tanker about 200 miles off the coast of Japan. Of course, my prayers go out to the all the families impacted. Almost immediately, the Marines identified one of the two F-18 crewmembers. One survived and the other’s body was recovered the next day. It took close to a week before they identified the 5 crewmembers on the KC-130 but as no surprise, each of those men died that night.

What we know for sure is that during a routine nighttime air refueling training event, the two aircraft collided and both went down. Six of 7 Marines died. At the moment, that is all we know. Speculation, conjecture, guessing, armchair quarterbacking, you name it, at this point is meaningless.

Immediately after the incident, my brother sent me a link to one of the articles about the collision. One thing my brother has imparted to me over the last year or so is that anytime I read an internet article, skim first for relevant facts then go to the comments at the end and see what people have to say.

This article got me pretty much riled. Not just because some people have absolutely no idea what the heck they are talking about yet feel the need to pontificate, but in today’s world, in our society, hate is so pervasive that I recoil at the mindset of so many of our citizens.

As for the technical aspects of air refueling. Yeah, two airplanes are very close to one another. That is the point. Some aircraft use booms and others use drogues. A drogue is essentially a hose that generally extends from the tanker’s wingtips with a basket on the end where the receiver aircraft has a probe that the pilot has to fly into the basket. Once contact is made, fuel passes to the receiver. With a boom, the receiver actually flies up underneath the tanker and a boom operator flies the boom into a receptacle on or near the top of the receiver. As a NATO and Royal Saudi Air Force AWACS pilot, we exclusively used the boom method while most Navy and Marine Corps aircraft use the drogue method.

In my years as an AWACS pilot, I have air refueled hundreds of times in daylight, nighttime, full moon, no moon, smooth air, turbulence, clear skies, clouds, straight and level and in turns. My biggest fuel onload was just short of 100,000 pounds, about 45-minutes to accomplish, and in all I have taken on close to 1,000,000 pounds of gas over the years. Is it hard to do? If I put you in an AWACS today and said do it, you would die a fiery death. But guess what, every pilot who does this is a professional and like any skill, we are trained to accomplish this task. With my close to 14,000 hours of flight time, could I land on an aircraft carrier today? I would die in a fiery crash. Again, it is a learned skill and like air refueling, some pilots never really get the hang of it although I am sure landing on a bouncing boat is one quadrillion times scarier and more difficult to do. But for me, there was nothing more fun than air refueling. I loved doing it, teaching it, absolutely everything about it.

Let’s fast forward to 6 December 2018. F-18 and KC-130 collide. Out come the people with no clue, by the dozens. I read the article and thanks to my brother, I start reading the comments. Here is the meat of this Robservation. I found it funny when people were talking technical aspects of air refueling but had absolutely no idea what they were talking about. Great comic relief but here is where this story turns sour.

The F-18 crewmember who died is identified as Captain Jahmar Resilard from Miramar, Florida. He was assigned to the All-Weather Fighter Attack Squadron 242 in Yamaguchi, Japan. I am careful not to say “pilot” yet because I have not read whether he was the front or back seater. Clearly, Captain Resilard is a black guy. Most of the comments people made assume he was the front seat pilot. Most were respectful but here are the most egregious of the comments. BTW – all spelling and grammatical errors have been left in place. If it looks stupid, think of the person who wrote it.

- “It looks like Capt. Resilard wasn’t among “A few good men”, the Marines were looking for?”

- “Normal people must suffer because of affirmative action.”

- “He can spit shine soldier boots better than anyone, but fly a jet?????

- “Obviously he wasn’t qualified to fly!”

- “Watermelon withdrawal can be severe inn those kind, even causing DT’s. He may have hallucinated and thought he saw a watermelon flyby and pulled his ejection seat lever.”

- “Those types are goods at basketball but anything else, not much.”

- “The first mistake was to let a black guy at the controls..”

To be honest, I am pretty angry right about now; and that takes a lot. A whole lot. Not only do we see these clearly racist and vitriolic comments, but on the AOL page, people have the ability to add a thumbs up or thumbs down for comments posted. Each of these had several thumbs up meaning these people were as stupid as those who made the original post. When I responded, AOL took my post down but left these up. You can still see them as far as I know.

It is difficult to imagine that people in this country still think this way. Whether hiding in obscurity in their mother’s basement or picking their noses and dining on their findings, I wonder from where do these people come? In a previous Robservation, I detailed my fight with racism in order to become

a pilot and how difficult it was at times. But reading these comments; “Watermelon withdrawal,” “only good at basketball,” “Minority hire,” “victim of affirmative action,” “not qualified to fly,” I am left thinking that these cretins ought to be ashamed and I do feel the need to pray for them. What a sad and miserable life one must have in order to carry around so much hate and ignorance daily. As I read these comments, am I to assume that in my 20 years at Delta, when I walk down the concourse or a passenger sticks his/her head in the cockpit door, some people see me and think the same idiot things like those posted above? I say “think” because they would not dare say such a thing to my face. It would be a bad day indeed for them.

But here is my challenge. Luckily, I believe that the folks reading this column likely do not think this way. Most of you have been reading my column now for almost ten years and I have only had one person express such ludicrous thoughts to me. But if you know anyone or if anyone picks this paper up and feels the need to agree with those comments, put on your man-pants, write a letter to the paper and use your real name. Not Ben Hur, Joe Baggodonuts, or any such nonsense. Use your real name. If you feel strongly enough, man up. For those who blindly think anytime they see a black person in a position of authority and feel the need to claim “affirmative action,” why not walk up to that person and challenge him or her to some debate and see what happens. Am I better than all the white pilots at Delta Airlines or in my Air Force squadrons through the years? Don’t be daft, of course not. Not even close. Are all the white pilots I have flown with better than me? I laugh out loud and again say, don’t be daft.

Let me assure you of one thing, if anyone thinks affirmative action got Captain Resilard into the Marine Corps, it sure as heck did not keep him there. It did not get him through pilot training, fighter lead-in or carrier qualifications. In our business, bad things happen to good people and those unable to make the cut are unceremoniously shipped out. No mercy. The F-18 and KC-130 collision is kind of a function of flying two airplanes in close proximity to one another. It happens but thanks to our training, not often.

If these people think affirmative action or Captain Resilard’s race had something to do with this incident, what do those same people think about 1982 when Thunderbird lead drove the four-ship diamond into the ground killing all four pilots? What about the 27 Blue Angels killed since the team’s inception? Since roughly only 2% of all military pilots are black, by the logic posited earlier, there are one hell of a lot of unqualified white pilots out there since accident statistics don’t reflect what these idiot people are trying to sell. What about the Italian demo team that had the mid-air at the Ramstein AFB airshow back in 1988 killing three pilots and some 80 people on the ground? Just watch an episode of air disasters for crying out loud on Smithsonian Channel. Were all of these pilots clearly not qualified to fly? Just good for shining boots? Most of the pilots in these incidents happen to be white. But guess what, the vast majority of pilots happen to be white. Therefore, this is no indication of

anything. Bottom line people, RACE AND/ OR AFFIRMATIVE ACTION HAS NOTHING TO DO WITH THESE INCIDENTS. NOTHING. NOTHING. NOTHING!!!!! Can I say this any clearer? NOTHING!! Grow the heck up. Get me outta here, Percy!