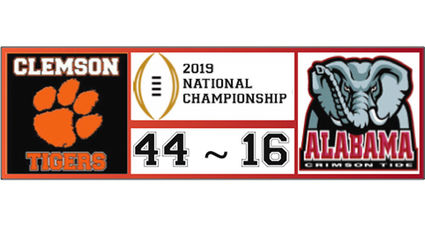 The magic is gone. Tua Tagovailoa is human after all. Coach Dabo Swinney had his Clemson Tigers so prepared for The National Championship Game with Alabama, there was nothing Nick Saban could do that would stem the onslaught of the Clemson defense. Alabama had the football inside the red zone enough times in this game to have won it. But, the inept play selections and the adept Clemson defense turned the Tide away over and over again. Meanwhile, freshman quarterback Trevor Lawrence did his impression of Peyton Manning every time Alabama mounted a comeback. Manning is Lawrence's idol. I could not tell the difference Monday night; January 7th, a day that will live in infamy with the followers of the Alabama Crimson Tide.

Continued on page 7A

"Country road take me home, to the place where I belong, West Virginia, Mountain Mamma, take me home." John Denver's biggest and most enduring hit song must have been a favorite of Coach Neal Brown of Troy. Even if it did not, the 38 year old Brown can get used to it for over 19 million dollars. That is what West Virginia offered him over a six year contract. Did he take it? You betcha!

Neal Brown is a smart man and now a very rich one. He was making 810 thousand dollars a year at Troy. It is not every day that a man is offered a 2.4 million dollar raise. He will probably learn to enjoy the mountain air in Morgantown, West Virginia. John Denver did.

What made Neal Brown so attractive to West Virginia? Well, he took over a program at Troy that had begun to stumble while trying to play "Big Boy" football. He struggled his first year, but won 10 games or more his last three years with the Trojans, finishing with a winning percentage of 68.6%. In addition he won three straight bowl games. Before his tenure at Troy, Brown had been successful as an assistant at several stops. He was also a wide receiver a Kentucky when the Wildcats were throwing the ball all over the field. His background perfectly fit the way college football is played today. He is considered a good offensive coach with a vast knowledge of the passing game.

Congratulations from The Alabama Gazette to Neal Brown for a job well done. West Virginia got their "Mountin Momma."