ILLEGAL IMMIGRANTS ARE JUST THAT: ILLEGAL 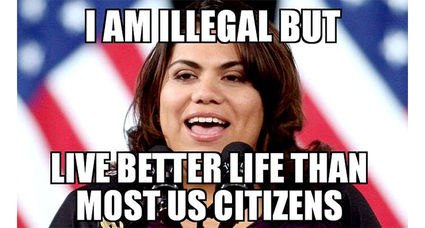 Amazingly, I wrote this column for another newspaper back in 2006. Here we are 13 years later and we are still fighting this stupid battle that nobody really seems to want to fix. Since then, we have had the migrant caravans, a host of highly publicized and documented cases of illegals committing crimes as heinous as murder and rape, the killings of border patrol agents and an entire segment of our society bereft of any feelings or desires to tackle the situation and effect any positive change toward the lives of lawful American citizens. It is hard to believe I wrote this 13 years ago. Take a look and see how true it remains today. Oh by the way, for those out there who cry that "Humans cannot be illegal," yes you can and yes you are. Deal with it. Here we go again . . . . !

Oh boy, oh boy, oh boy! When will the insanity stop? My guess is never. That is until Americans get off our collective butts, stop being politically correct and begin to enforce those things that are right and just. The illegal immigration situation in America today is just one of those hot button issues that seems to divide the country.

When I turned on the news last week and watched the immigration demonstrations in Los Angeles, I wanted to slam my face repeatedly into the first brick wall I saw. Not so much that I like pain, but rather the pain associated with a broken and bloody face would pale in comparison to the pain I endured watching these people (Illegal immigrants) walk through our streets protesting. (For what it is worth, I felt the same way with the migrant caravans this past Fall).

For starters, let's set the record straight. No matter what you feel about this issue, the fact remains that ILLEGAL ALIENS ARE HERE ILLEGALLY!! Period. Done. End of discussion. If you don't like it, I don't really care. If they crossed the border into the United States illegally, they broke the law. I watched one foolish woman talking to a reporter claiming that, "We are not criminals. We just want a better life for our families." You know what? You may indeed want a better life for your family but guess what. YOU ARE A CRIMINAL!! Why is this so hard to understand? Okay folks, here's basic Math 101: If a=b and b=c then a=c. It's really quite simple. Really. If coming across the border illegally is a crime and committing a crime makes you a criminal, then coming across the border illegally makes you a criminal. Ta da!! Now that this fact cannot be disputed, let's get to some the real issues.

Driver's licenses. Why on earth would you want to give a LEGAL government document to an ILLEGAL ALIEN? To me, the word insane readily comes to mind. Think about how stupid this is. "Hey, let's give ILLEGAL aliens LEGAL government documents so they can LEGALLY move about freely in the country they ILLEGALLY entered and vote ILLEGALLY in our LEGAL elections." Yes, it will lead to this. Also, just because I do not want ILLEGAL ALIENS in the US, that doesn't make me a "racist." Look up the definition and then get back to me. (Update: I love the videos of Obama, Pelosi, Feinstein and Schumer all denigrating illegal immigration just a short several years ago but now that Trump is espousing and continuing the work Obama put in place, Trump is a racist and borders apparently don't mean anything to them.)

Look, I am not completely without a heart and I fully understand these people's desire to make a better life for themselves. There are legal avenues, however, for them to pursue. Likewise, don't you think this should primarily be the responsibility of the government where people are fleeing for a better life? Think about it. Those who want to totally embrace illegal immigration seemingly would welcome every person on this planet fleeing an impoverished and inept country. The reality of this is that at some point, America would become just like many of the countries these people are trying to escape. In some parts of the US, that is quickly becoming reality.

The immediate solution to me is to beef up the borders, arresting known illegals and shipping them out. If someone hires illegals, they should be fined $100,000 per illegal. If two illegals have a baby, the so-called "anchor baby," that baby should not gain automatic US citizenship and it too should be shipped back to wherever the parents came from. Next, pressure would have to be put on Mexican President Vicente Fox. (Update: This obviously applies to the leader of any country who is trying to force illegal immigration within our borders). Do you realize the Mexicans just discovered yet another oil reserve in the Gulf of Mexico? It will more than double their oil reserves to over 12 billion barrels. With these oil reserves, Mexico could become one of the wealthiest countries in the world, but because of their short-sighted, narrow minded and corrupt leadership, they will likely continue to squander and mismanage their national wealth on personal corruption. Yet somehow, as Americans, we are supposed to welcome all their poor into our country when they have the means but not desire to help their own people. By the way, what do you think Vicente Fox's government does to illegals coming across their southern border? Is it racist that the Mexicans don't allow this practice in their own country? I didn't think so.

When I watched some fool in Los Angeles declare that we (US government) couldn't make them leave and that we (Americans) had no right throw them out, I was appalled. Since when can non-US citizens illegally break into our country and then dictate policy to us? I say, "Hey Fox (and other world leaders), fix your country and your people won't want to leave. Share the wealth with all your citizens and quite expecting us to clean up your messes for you."

For your enjoyment, here go several links to pages some of you may find interesting.

Mr.Tate , your reasoning on immigration is valid. However I disagree that all illegals are criminal that's just a play on words. If we people of color were still in slavery we would be illegal and not by choice or ancestors were either stolen or bought for a price. This ( America) is suppose to be theland of the free! It didn't start out as that. An equal opportunity no more and yes trump is a racist. He's not just against Mexicans, Cubans, Salvadoreans, Haitians, or Guatemalans he's against all