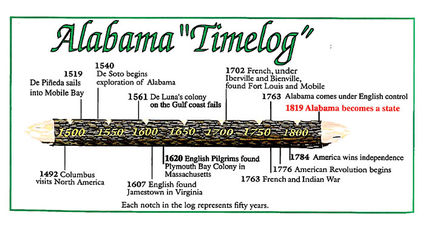 In 1699, the French sailed into Pensacola Bay. Upon finding the Spanish well established there, they moved on westward to discover the mouth of the river, "La Mobilla."

In charge was a French naval officer, La Moyne Iberville. With him, was his younger brother, Bienville. They explored the area of Mobile Bay, and the island close to the Bay. Shocked at finding more than 50 bodies of men and women who had been slain, he named the area "massacre." Later, the French renamed that area, Dauphin Island. This name was a name within the royalty of the French Throne.

The French moved about to be closer to trade with the Indians, which was their desire. Their purpose in trading with the Indians was to receive pelts and deerskins in exchange for things the Indians desired: such as tools, knives, cotton cloths, and beads.

Bienville wanted to establish a settlement of contented families, but at that time, there were no "families" there. It is interesting to know that he asked the French government to assist in finding available women who would respond to such an exciting challenge to adventure. These women would have to accept the life on the frontier and be married to someone they had not known.

Called "The Cassette Girls," many accepted the challenge. Some adjusted to the challenge and married, and lived in the community. Some were miserable and their reaction was known as "The Petticoat Insurrection." Thankfully, many women settled down, had children, and lived happy lives. Others moved on to New Orleans.

In 1711, the French had built a fort, south where the river flows into the bay. Later, they built another fort in the area that we know as Mobile today, and the river was named Mobile Bay. The French were ambitious and remarkably successful in their relationships and trade with the Indians.

In 1717, they constructed Fort Toulouse where the Coosa and Tallapoosa flow together. France and England had been rivals in Europe, and now they were rivals in America.

Knowing that the British were very strong in South Carolina, the French hoped that they would not come to Alabama.

We will not have the space to go into great detail, but let it be known that from 1688 to 1782, numerous wars occurred that involved England, France, and Spain. A prime battle was over the trade with the Indians. By 1763, the English had defeated the French and Spanish, and now.........the English flag flew over Mobile, Alabama.

The rivers of Alabama have been such a blessing, even today. The French used them as a highway. Think about our area. Tuscaloosa is on the Black Warrior River. Wetumpka is on the Coosa. Tallassee is on the Tallapoosa.

The English had many advantages over the French. Great Britain had manufacturing and could have great varieties of goods to trade. No one could compete with their ships in international waters. By 1733, they moved into Georgia, very close to Alabama.

We know that the Indian population divided themselves into nations in Alabama: The Cherokee, Creek, Choctaw, and Chickasaw. The Creeks were named Muscogee, but the English called them Creeks. The Creeks and Choctaws were enemies much of the time. They were strong on sports, but sadly, much of that was bloody.

Alabama: The History, Geography, Economics, and The Civics of an

Everything in this article today came from my 4th grade History Alabama notes from our Alabama History notebook and textbook. Can't you see why I (Bobbie Ames) loved teaching Alabama history for many decades. There is so much more I could add. It is such a tragedy that government schools do not teach true History anymore. True History is really HIS STORY. When the Truth is told, God's Providence and Grace shines through it all.

Bobbie Ames writes from The Hoffman Education Center for the Family, where the ministry promotes Christian Education that is foundational to the Historic Biblical Principle Approach. Consulting services are available through the Hoffman Research Library. She can be reached at P. O. Box 241405, Montgomery, AL 36124, or at bobbiehames@gmail.com.