Should Children be Voting? 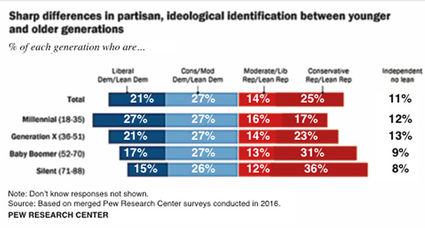 In our nation’s beginning, our founding fathers wrote our Constitution to specify that American citizens must be 21 years old to be eligible to vote. This was considered to be the minimum age for a person to be mature enough to make wise decisions in the selection of our elected leaders. Our founders also set minimum ages for Senators (30) and the President (35).

But in 1971, the American people very foolishly ratified the 26th Amendment which lowered the minimum voting age to 18. The argument for this action was that since 18 year olds could be drafted for the Vietnam War, they should be allowed to vote for and against their authorities. This seems reasonable as a first thought, but studies have verified that the human mind does not mature adequately to make leadership decisions at age 18.

And to make matters worse, instead of raising the voting age back to 21, some supporters of statist ideologies are now proposing to lower it to 16.

John Cate said, “Just bamboozle enough people, and teens are easier to bamboozle into voting their rights away, and your mission is accomplished.”

We must ask ourselves, “Are we ready to let children make stupid decisions on the future of our nation?”

Today, even 21 might be too low. The 21 year olds today are considerably less mature than those of two centuries ago. We have a number of serious studies that verify that a minimum voting age of at least 25 is essential for sound management. And some people believe it should be higher—30 or even 35.

These studies have proven that the prefrontal cortex of a human brain, which is critically responsible for self-control and making rational long-term decisions, does not fully develop until about the age of 25.

Less mature brains operate differently from older ones. In these cases, the amygdala substitutes for the yet to be developed parts of the prefrontal cortex. Instead of sound decisions, these underdeveloped minds exhibit emotions, fear, anger, aggression, and short-sighted, reflexive behaviors. As a result, these immature voters will endorse reckless actions that can endanger and destroy our great nation. It is national suicide.

Here is a good question to ask yourself, if you are over 25, and especially if you are over 35: Be honest with your answer. Were you capable of making wise decisions in a voting booth when you were 18? What about 16?

Yes, there are a few exceptions. But polls and other data clearly reveal that older people make wiser decisions than younger ones, and for each age group, the older, the wiser.

Glenn Reynolds said, “It’s bad enough to have to treat college students like children. But it’s intolerable to be governed by spoiled children…. To be a voter, one must be able to participate in adult political discussions. It’s necessary to be able to listen to opposing arguments and even… to change your mind in response to new evidence.”

“It doesn’t matter how smart teens are or how well they scored on the SAT or ACT. Good judgment isn’t something they can excel in, at least not yet. The rational part of a teen’s brain isn’t fully developed and won’t be until age 25 or so.” The Amygdala: Definition, Role & Function - Video & Lesson Transcript | Study.com

5. Quora.com, “Why do some people on the left want to lower the voting age to 16 years old?”