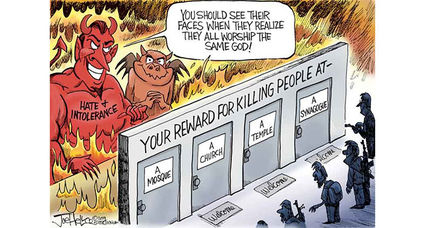 Easter morning, I woke up to celebrate the most amazing miracle in the history of the universe. The resurrection of my Lord and Savior, Jesus Christ. We talked about this at length last Friday night out at Red Eagle where three guys from my church go out twice per month for prison ministry. After listening to Brother Cedrick speak, I was pumped up for Easter. Sunday morning, I got up, had a little breakfast making sure I left ample space for lunch a little after church, get semi-dolled up, turned on the tube to catch some news and boom, another suicide bombing. Or in this case bombings, each taking place in Sri Lanka. In all, the death toll now stands at 290 with almost 500 injured. As one can imagine, a bombing of this magnitude taking place on Easter Sunday was done to send a message of hate and evil on a day where love reigns supreme. No surprise but a radical Muslim group is claiming responsibility. In all, 24 people have been arrested and although warnings went out ten days prior to the bombings, authorities decided to do nothing about it. But that is another story. I am not going to sit here and bash the evil people who did this. There is no point. They do what they do because they are what they are; questions?

I want to shift the focus to those cretins who lurk here within our borders. No, I am not talking about hate groups per se, but perhaps in a way I am. Let’s talk about some people within the People’s Democratic Nationalist Front here in the states. It is amazing to me how these socialist wackos are so quick to rally around a pathetic narrative instead of offering any heartfelt thoughts and/or condolences to the Christian victims in these bombings. Here are just five examples of worthless words mired deep in non-thinking groupthink. Each of these tweets come from https://thefederalistpapers.org/opinion/200-christians-murdered-terrorists-dems-refuse-call-christians.

“The attacks on tourists and Easter worshippers in Sri Lanka are an attack on humanity. On a day devoted to love, redemption, and renewal, we pray for the victims and stand with the people of Sri Lanka.”

“On this holy weekend for many faiths, we must stand united against hatred and violence. I'm praying for everyone affected by today's horrific attacks on Easter worshippers and travelers in Sri Lanka.”

“On a day of redemption and hope, the evil of these attacks on Easter worshippers and tourists in Sri Lanka is deeply saddening. My prayers today are with the dead and injured, and their families. May we find grace.”

“Such a horrific terror attack on Easter worshippers and tourists in Sri Lanka. My thoughts are with the victims of today’s attack. We must stand united against hate and violence.”

“The horrific attacks on Easter worshippers in Sri Lanka are heartbreaking. It fills me with sadness that an act of such hatred and violence took the lives of so many on the holiest of days. We have work to do so that every person, wherever they live, may worship in peace.”

At one level, a very small one, these thoughts seem to be sincere. In reality, however, I see something much different; something two-faced, fallacious and hypocritical. First of all, until yesterday, I had never heard the term, “Easter Worshippers.” If I were a gambling man, and I am not, I would go “all in” on the assumption that until this past weekend, few if any of you guys have heard that term either. What exactly is it supposed to mean? Easter Worshipper? I don’t know about you, but I do not “worship” Easter but someone infinitely more significant. To say we are Easter Worshippers is to liken us to a bunch of Druids magnifying Stonehenge. It is utterly ridiculous and disingenuous.

And the fact that each of these people, and others on the Left, have used almost the exact same words lets us know they have rallied around one another to push through a certain narrative; lock-step like the little fascists they are. That

narrative of course cannot be that Muslims have once again killed hundreds of Christians although these same people certainly had no problem stating that exact reality in the Mosque killings in New Zealand last month. Not only did the press not have an issue with claiming the Muslims as victims (they were and should have been identified as such) but the words “terrorist attacks” featured front and center on news programs for well over a week. Here you have so-called prominent Americans and they seemingly cannot bring themselves to utter either words calling out the terrorists or just simply saying the words, “Christian or terrorist.” They just cannot do it. And then we have Hillary’s interesting comment including the phrase, “On this holy weekend for many faiths . . .” Sheeesh!! I am left shaking my head over her questionable choice of words, “many faiths.” What faiths is she actually talking about other than the Christians who celebrate Resurrection Sunday? Do other faiths really

celebrate or even reverently acknowledge this day? Please, somebody teach me something here. We are not talking denominations but faiths. Her words not mine.

Regardless, I find it sad that these people, some supposedly professing to be Christian, cannot even say the “C” word and yet have to conjure up a ridiculous term to rally behind an insincere and misleading narrative. If I were to chronicle this situation, it would read, “Easter morning services were interrupted today when Muslim terrorists exploded bombs in several churches killing 290 Christians celebrating the resurrection of their Lord and Savior, Jesus Christ.” Simple. Wasn’t that easy? I personally would not care if anybody was offended either. It is what it is. Put on your “man pants” and stand for the truth. Any other narrative pushed by the media is worthless and should be ignored. I will look at their words for what they are worth. Absolutely nothing.