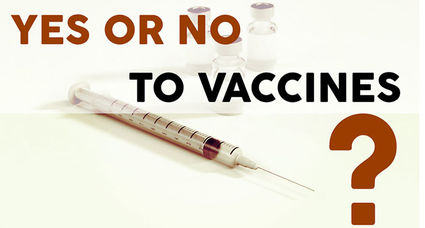 The current measles outbreak has brought new criticism of parents who refuse to vaccinate their children over vaccine safety concerns. Measles was declared to be eradicated in the U.S. in 2000, and yet this year 550 cases have occurred through the second week of April. Anti-vaccination attitudes, I think, reflect a decline in trust in government.

The research “anti-vaxxers” cite linking vaccines to autism, multiple sclerosis, and other ailments, has been called “junk science.” The Centers for Disease Control and the Food and Drug Administration have pronounced vaccines safe. Physicians promoting the “danger” have faced professional censure. Despite this, I do not see the safety of vaccines as allowing us to dismiss the anti-vaccination position.

In a free nation, the government serves the people, not the other way around. Freedom means making decisions for ourselves based on our values, beliefs, and assessment of risks. We do not have to justify our decisions to others, even experts. If so, then why should those of us who believe that vaccines are safe force our assessment on others?

Parental rights differ from personal rights, as parents make decisions for their children. We recognize that parents who neglect or abuse their children should lose (at least temporarily) their parental rights. Parents should be afforded freedom to raise and protect their children as they see fit unless they abuse these rights.

Hard cases arise when parents choose faith healing and prayer over effective medical treatments. The dilemma stems from a conflict between personal and parental rights: the child hypothetically could wish to receive medical treatment. Respecting the child’s rights might require restricting parental choice.

Can we justify mandatory vaccination similarly? Several required vaccinations are for generally non-life-threatening illnesses like chickenpox, mumps, and even measles. People feared and dreaded polio before Dr. Salk’s vaccine; chickenpox was a two week vacation from school. Preventing a brief absence from school is not grounds for trumping parental rights.

Immunization, of course, protects others besides the vaccinated. Economists call this a spillover or external benefit, which people may well ignore in vaccination decisions. An important spillover here is protecting persons with compromised immune systems who cannot be safely vaccinated.

Many economists believe that external benefits justify government mandates. I disagree, because the person immunized still benefits the most. If the person getting immunized (or the parent) believes that the cost exceeds the benefit, a small spillover benefit is unlikely to alter the balance.

Nobel prize-winning economist James Buchanan offered a better way to think about such cases. Politics, Buchanan contended, is an exchange of constraints on ourselves: I agree to vaccinate my son in exchange for other parents vaccinating their children. A similar argument applies to taxes – I agree to pay taxes because you will be made to pay.

We will never all agree on any decision of significance. Government though involves the exchange of numerous constraints, and we may benefit from the package as a whole. For instance, all states require vaccination against eight viruses for school children. We might disagree with one or two of the requirements and still abide by the mandate.

Whether government constraints benefit us depends on whether we trust that politicians act in our best interest. Differences in state vaccination requirements highlight this tension. All states require vaccination against eight illnesses, typically through four shots. Beyond this, forty-three and thirteen states require immunization for Hepatitis B and Hepatitis A respectively. Connecticut requires nine shots; Alabama requires only four. If immunizations reflect a clear public health consensus, why do state requirements differ?

Politics and not just public health influences requirements. Debate over the relatively new HPV vaccine, which can prevent cervical cancer, reveals this. Two states and the District of Columbia require the vaccine, which costs over $200, and makers Merck and GlaxoSmithKline have lobbied lawmakers in other states for mandates. Political considerations and campaign contributions shape vaccine mandates.

Can we really trust that our politicians impose mandates on us based exclusively on our interests and sentiments? Unfortunately not. One consequence of this lack of trust is anti-vaccination skepticism.

Daniel Sutter is the Charles G. Koch Professor of Economics with the Manuel H. Johnson Center for Political Economy at Troy University and host of Econversations on TrojanVision. The opinions expressed in this column are the author’s and do not necessarily reflect the views of Troy University.