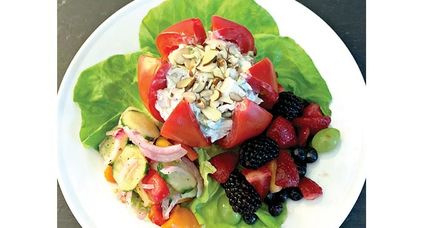 Fall has not arrived so any mention of warm soups and stews, fruit pies just out of the oven and canning the fruits and vegetables I have in the freezer would be premature. I'm staying with the theme of preparing meals and dishes that are served cold or at least room temperature. And meals that do not require heating up the kitchen. The air conditioner for my kitchen is overwhelmed with heat from the dishwasher. I stand in front of the opened refrigerator not to get ideas for meals but to get cool.

The two freezers in the kitchen are stocked with meats, vegetables and fruits so I should find something to write about. But no, I went to the store to stock up on fresh items. I ended up making a dish for dinner with friends. I decided to prepare a dish similar to the Rustic Bread Bowl Salad I included in my August article. I went from a pasta salad to a chicken salad and instead of a bread bowl, I stuffed some very large tomatoes.

The idea for the stuffed tomatoes came to me as I was strolling through the produce section of a local grocery store. I came upon a bin full of very large and very fresh tomatoes. I remembered a lunch my co-workers and I had during a conference in Montgomery. One of the entree choices was a chicken salad stuffed tomato. Nothing earth shattering new but it was a tasty, filling and inexpensive meal. And the presentation of the dish made it even more appealing. These tomatoes were perfect for that dish.

I knew I could develop a good recipe for the chicken salad, but I was not sure how to stuff the tomatoes. First was to remove the core. A logical step when prepping tomatoes. After removing the core I had to remove the insides. That was difficult with the small hole I made when removing the core. If I cut more off the top to remove the insides and to stuff the chicken salad inside, the presentation was lacking. This is where PINTEREST and a YOU TUBE video came to the rescue. I left the core in the tomato and opened the bottom. The tomato would look like a flower with red petals. After only messing up one tomato, I had the technique. I had to be careful not to cut too deep or remove too much of the insides of the tomato. The weight of the filling actually helped close the tomato around the chicken salad.

Next was the chicken salad. If you ask someone who makes the best tuna salad, the answer will be their mother. They will want the same ingredients their mother included, be it apples, pecans, mustard or relish. I decided to make a simple, few ingredient chicken salad to please a wide range of tastes. You can have a field day doctoring up this chicken salad. But everyone I served liked that it was a simple light chicken salad. For a hot day in September it was perfect. The sides I had with the tomato made it a complete entree.

I have been experimenting with ways to extend the shelf life of some foods. I have had success with saving avocados from going bad without just eating them all before they have a chance to go bad. I have a vacuum food storage machine used for sous vide cooking. It is mostly used to freeze foods either cooked or raw to keep them from freezer burn. I remember that my H.E.B. grocery store in Texas always had avocado halves sealed in a plastic bag with a shelf life of a week to 10 days, maybe more. I had several avocados that were pushing their prime so I decided to run some tests. I first cut an avocado in half. One half I promptly ate. Experimenting makes you hungry. With the other half, I tried the old trick of leaving the pit in and coating the half with lemon juice and putting it in the icebox, uncovered. The remaining avocados I peeled and pitted. I placed each one in a separate vacuum bag with a dribble of lemon juice and sealed them. One bag went to the freezer and one bag went to the refrigerator.

After two days, I took the uncovered half out of the refrigerator and removed the pit. The color was great, like I just peeled it. So I sliced it and ate it. Still firm and tasty. After one week, I took the sealed avocado from the icebox and sliced it and put it in two hot dogs. What else? It was slightly softer than the one left uncovered in the icebox but I think that was because the icebox dried the open avocado. It was still a tasty avocado! The one in the freezer is still in the freezer. I took it out long enough for a photograph. It still has all the color of a fresh one. Comments I have read about freezing avocados is they will be somewhat mushy after defrosting and only good for guacamole. That is not a problem because I make guacamole out of most of the avocados I buy. So I am going to peel, dribble with lemon juice and seal avocados when they are on sale. Some will go to the freezer and some will go to the produce drawer. I will have avocados for everyday eating and when need be, I can make a batch of guacamole for us and guests.

Remember the lists of items you need to keep in your pantry? After reading an article about food storage here are a few items to add. These are canned and packaged items that are, as Alton Brown would say "Good Eats". Items that have a long shelf life and are safe to eat.

Precooked packaged grains: Look for sodium content. Since these are cooked faster than you can at home, they usually contain more of the healthy nutrients.

Frozen legumes: Canned beans are usually packed with too much salt.

Nut butters: Check for sugar and salt content. There are butters for every nut you can think of.

Frozen fruit: Freshly picked and then frozen, no preservatives.

There seems to be an abundant crop of zucchini this summer. After eating it baked, fried, spiralized and stewed, my wife decided to do a cold dish with zucchini. A refreshing cold soup. The one drawback is you have to cook the zucchini first. It does not take long to cook diced zucchini and chopped green onions in chicken broth. The heat index for the kitchen is still low.

I have been an advocate for buying local. Now there is an organization to designate locally farmed products. It is called SWEET GROWN ALABAMA. As Rick Pate, commissioner of the Alabama Department of Agriculture and Industries, stated in an interview "We want residents of Alabama to walk into a grocery store or farmers market and easily identify products grown in Alabama." He added, "The Sweet Grown Alabama brand logo will allow them to do so and ensure the product they purchase is grown to the highest standards of quality and food safety."