A Coward Dies a Thousand Deaths: I wish it were so few… 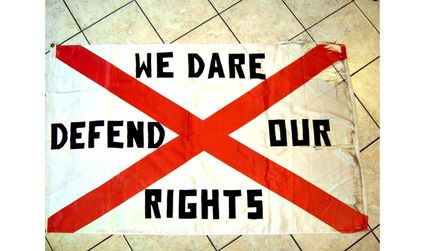 This month is the ten year anniversary of submitting my first Alabama Gazette column. It addressed eminent domain abuse; the infamous Kelo decision in the US Supreme Court and more specifically making a case for reparations to those like Mr. Williams (oft black landowners with insurmountable impediments to defend themselves in corrupt courts) who suffered wrongful takings in Alabama. Reflecting back it has been a ‘roller-coaster’ of highs/lows at our federal, local and State governments this past decade. DC Kabuki theatre displayed yet another high-watermark of moans, shrieks and shrills worthy of note these past weeks.

Pat Robertson’s assertion President Trump was losing his Heavenly mandate was most stomach churning as I imagined Jefferson increasing his gravely RPMs given his powerful opening in our Declaration of Independence. Doubtful Messrs. Robertson, Trump, et al type big govt. Republocrats were ever educated in this regard - more is the pity. Sadder still, men of this sort are looked upon by many as leaders while they aid and abet several scores of decay continuing to erode away our founders accomplishments who set us on a path to liberty. Champions of command and control [traditional] conservatism and modern liberalism find it effective to get the dumb masses distracted from Jefferson’s point and reason for stressing “all men are created equal” in explanation of what was driving colonists’ desire to separate from mother England. No doubt the crown would construe the course of human events in our Declaration as treason -- a word more loosely bantered about in our modern history in spite of the clarity Article 3, Section 3 of our Constitution provides to grammatically correct readers over our politically correct hacks who usually carry the day.

I consider Jefferson’s pen one of the most courageous of the 18th century - imagine speaking Truth to an earthly king that to the Creator you are equal to your subjects! Has there ever been a more effective specific case made against ‘divine right’ and monarchical tyranny? Harrington wrote, “Treason doth never prosper - what’s the reason? For it prospers, none dare call it treason.” We’re so far afield from the designed path of the Constitution and so accepting of actual Treason [acts of war against a member nation state(s) in the coalition] anyone evoking divine authority over adherence to the ruling document isn’t considered alarming today. A document politicians took an oath to uphold and defend to attenuate abuse of power conferred upon them [their office/position] by the people of each State. Those who most cunningly and fervently evoke divinity oft are the most abusive and appear least worried of the Creator’s discipline. Listen more carefully how DJT asserts his rights instead of the authority of the office he’s abusing.

Not to be overshadowed as a reality Kabuki TV star, Rep. Terri Sewell’s input on the hearings to consider impeachment were on par with Pat Robertson’s rhetoric. She even caught my bride’s ear who matter of factly said, “That person sounds so angry and mean - she must be an unhappy person.” At first, I couldn’t believe she failed to recall what this despicable public servant did to us. It is the most angry I’ve ever got at a female which evoked strong instruction in my youth from my gentleman earthly father to restrain getting physical and let her words and poor demeanor and spirit speak for itself. Much like big govt. Democrat Trump (most think different now ‘donning’ the Republican moniker; furthermore I do not find Trump a racist - he genuinely doesn’t care the colour, creed, culture, etc. of those he manipulates and takes from) public servant Sewell also has complete disregard for fundamental civil rights - esp. life, liberty and property.

Also Trump-like, Sewell has a foul mouth - saying my unflappable bride “can’t remember s@#t” when she wouldn’t agree to remembering the falsehoods public servant Sewell was trying to lead her into affirming. While similarly (poorly) trained to not understand/ignore the importance of uniformly applying ‘all are created equal’ as the Robertson crowd, Rep. Sewell is more cunning than Trump using political rhetoric to accomplish her desired ends and cloak her avarice. Sewell is just as comfortable as Trump wrongfully taking from productive citizens for her desired redistributions.

Sewell has been as absent as most politburo thugs in getting justice for Williams and other victims of eminent domain abuse in Alabama, but would show in a “New York Minute” if it could be used (like Doug Jones) to advance vote totals toward the desired duopoly result on election day(s). Elections more easily than ever rigged with increased population and the 435 limit, restrictive ballot access laws, etc. More to the point Sewell would not likely win her Congressional seat where she resides if Article 1, Section 2 of the Constitution (one US Rep. for every 30,000, round-up) were followed allowing many more US House Reps. who may actually understand, care about and fight for our civil rights. Similarly, if we had some competition instead of more rigged Clinton/Trump choices, our nation may get back on a path toward liberty. Again, Sewell and Trump types have no problem stealing from productive citizens (perhaps in their hearts they know they can’t compete in a non-rigged environment) but show themselves as Kabuki stars when the theatre decides who gets the political theft.

Sewell’s demeanor conjured the 20th Anniversary of bringing the worst year of my life to a close when the governments, mostly federal (80% or 90%, never did get an answer in court) finally paid $145,000 ending almost a year of homelessness, November 1999. Not that public servants like Butts, Dean, Dial, Dubina, Hubbard, King, Little, Meadows, Riley, Roberts, Rogers, Sewell, Shelby, Siegelman, H. Smith, Thompson, et al care about civil rights except as rhetoric to advance their own interest, it was nonetheless amazing to watch ‘good Democrats’ like Dial, Little, Sewell and Warren work hand in glove protecting Butts, Hubbard (some even at Felon Mike’s jury selection) Riley and Roberts. I unchambered the round from my M-14 deciding (wrongly it seems to some in retrospect) to give the courts a chance instead of opening fire on the large bulldozer putting me in fear of my life (until I pointed the weapon and stopped forward motion) for standing my ground, placing the round next to the bible my mother gave me before leaving Baltimore. I would rather die than

Words can’t convey how crushing it is to feel a failure as a husband losing a home (paid off in 1995) and putting the person I hold most dear through such an ordeal. It did make our bond and bond to God much stronger, even more so when we refused handsome settlement offers after winning so many times before righteous jurists over the years. We wanted the issue made clear in the courts for those not blessed with wealth, family, friends, etc. to weather such tyranny. Some things never fade. The back-up ‘beep’ of heavy machinery still puts me in a panic to grab my M-14… Other things attenuate. No longer teaching I don’t have to suffer the expense, time and stress to travel into an increasingly unsafe town (safety not a priority over desired wealth transfers to politically connected contracts) to continue that charity I hold dear. Some think it foolish I’ve foregone so much in earnings (which would further feed the beast with income taxes?) to be a lowly educator. The harm done with revenue I generate for governments is very hard to overcome with my charitable efforts, but that’s fodder for another column.

In retrospect I do fear God’s judgment on not opening fire that day. Shakespeare wrote, “A coward dies a thousand times before his death, but the valiant taste of death but once.” When the US Supreme Court (some say Kagan or Sotomayer given the case number assignment) shown it would not rule a second time, where nothing changed after winning unanimously in 2005… rarely a day passed where I didn’t find myself a coward and wondered if I could do so again if/when violated the next time. Certain Jesus knew the slim probability Annas, Caiaphas, Herod, Pilate, et al would do right, He nonetheless trod the righteous path to give these souls the opportunity to save themselves. I have little doubt how Dubina, English, Ivey, Jones, Rogers, Sewell, Shelby et al along with the current SCotUS will act in the future. Would another chance be a rare time they reject evil? - or am I further aiding and abetting evil by not fighting as instructed is my duty in the Declaration of Independence?

Looking back even I consider myself foolish to think I’d win against demons so greatly accepted and even promoted by those many claim godly men. I thought winning would earn me standing as a good earthly husband and father worthy of shepherding children to follow Jesus’ path to God through this world. I spent more effort, money and time in the courts trying to secure these fundamental civil rights than most raising a child. Now I’m drawn to Luke Chapter 23 text where Jesus said to the Daughters of Jerusalem, “weep not for me, but weep for yourselves, and for your children. For, behold, the days are coming, in which they shall say, Blessed are the barren, and the wombs that never bare, and the paps which never gave suck. Then shall they begin to say to the mountains, Fall on us; and to the hills, Cover us.”

God’s wisdom. He knew I could withstand the despair of losing to evil in my duty to shepherd our politburo members to do right; He knew I was too weak to watch my children endure it. I still experience joy remembering the jurists who did right (Judges Nix, Jake & Susan Walker, the unanimous 2005 SCotUS) my amazing attorneys, friends, family, those who armed themselves to house sit while we were under siege and took time to write sound affidavits. Hard to imagine anyone on earth who suffered more than Mary watching Jesus destroyed by the corrupt clergy and governments of Tiberius’ day; I ask all who suffered watching me so poorly (in every way) address this episode to forgive me. The wrongdoing was clear and easy for those who wanted to follow the law to correct. Next time a better man may prevail.

In closing, I pray those who understand the dark days coming guard against despair, one of Satan’s most effective weapons to remove the righteous among our youth. Suicide statistics for Alabama - esp. among those who serve(d) is alarming. Students who were former military (those taken from the best of health destroyed by our own arms and medicine appear most troubled) seem most vulnerable as they discover what they thought they were fighting for has little resemblance of what the document they swore an oath to uphold and defend requires. God does not want you to take your life but to stand well against the despicable public servants (from AOC and McConnell to Sewell and Trump) destroying our lives. Do not give the corrupt an easy way out to not account for the greater cost and consequences of their actions; fight all you can muster to reduce even one from suffering a similar fate.