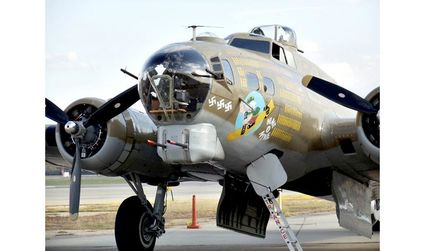 On 2 October of this year, I was in the Orange Theory Fitness facility getting ready to start a noon workout. Sitting there waiting for class to begin, I was reading through some of the current news feeds and something tragic caught my eye. As a pilot and former safety officer, anytime I see where an airplane has crashed, it gets my undivided attention. Then I saw that it was not just an ordinary airplane but a World War II era B-17G Flying Fortress, operated by the Collings Foundation out of Stow, Massachusetts. It crashed shortly after takeoff at Bradley International Airport in Windsor Locks, Connecticut. That is an airport I have flown into dozens of times as a Delta pilot. My WWII aviation history side was crushed.

Details are still a bit sketchy and the NTSB has not yet released a final report but has issued just one initial report with some minor findings. On the aircraft, both pilots and 5 passengers were killed while six onboard and one person on the ground was injured. There will be more to follow as time passes on and I am not willing to guess or better yet, “second guess” what happened on that airplane.

For me, what is equally saddening is that in November of 2017, my wife and I had the opportunity to fly on this same airplane when it came to Montgomery’s Regional Airport. The pilot that day, 75-year-old Ernest McCauley, was the same man who died in this accident. He was a very accomplished B-17 pilot with some 7,000 hours, more than anyone in history, on this aircraft type. It was an experience I will cherish for the rest of my life. Back in 2010, I wrote the Robservation below about the time Nine-O-Nine, as her nose art depicted, came to Montgomery and my wife and I went out to see her. I want to share that now; a tribute to “Nine-O-Nine” and the men who died with her.

BEAUTY IS IN THE EYE OF THE BEHOLDER

I’ve been married to the same wonderful woman for over 25 years and am as blessed as any man can possibly be. Still, like any red-blooded American male, I remain appreciative of physical beauty. The world is full of it and I am not necessarily talking about Kate Beckensale running around as a vampire. (Okay, maybe a little) Although many a beauty will grab my attention from time to time, few succeed in keeping it.

I’m not sure if it is the way she looks standing alone in the distance or whether it is the way she confidently presents and carries herself. Strong and self-assured yet full of the soft, majestic lines every man likes to see. It is almost like the woman who walks into the room and acts as though she owns the place. People are unwittingly drawn to her like a moth to a flame. As I approached her the other day, my decades old initial reactions to her still proved to be correct. She, in her own way, remains indescribably stunning. She may not be as “pretty” as some younger “girls,” but none are more beckoning, proud and supremely confident as is she. When you saddle up next to her, the feel of her “skin” under your hand is intoxicating and her scent unforgettable. She, in effect, is what we call “the total package.” My wife knows of my obsession yet graciously puts up with it. “Bless his heart,” she thinks.

Now before you jump to conclusions, I am of course talking about the Boeing B-17 Flying Fortress. From 1-4 November, members of the Collings Foundation brought their B-17 “Nine-O-Nine”, their B-24 “Witchcraft”, and a P-51 Mustang to the Montgomery Regional Airport. This is an almost semi-annual event that I look forward to like a little kid on Christmas morning. Whenever I find out a B-17 (any B-17) is coming to town, I start planning my schedule to make sure I’m around so I can see her. Sometimes only a solitary B-17 will show up, other times more planes will come. It doesn’t really matter to me because the star of the show remains the same. Although I love the P-51 and recognize it as arguably one of the two greatest fighter aircraft of all time, there are literally hundreds of those flying around. As for the B-24, although there are only two of those flying today, it is just not as pretty an airplane. The B-24 is the ugly puppy at the kennel that nobody sees. It is a good dog and a tireless workhorse that will serve its owner honorably but . . . it’s not a B-17.

The tours began Monday afternoon at 1400. When my wife and I got to the airport at 1345, she could tell I was ready to burst. Across the fence from us stood “the other woman.” I started walking faster and faster, turning back to her urging her to “come on.” Going into the Montgomery Aviation main building which led to the ramp, she told me she had to first use the bathroom. I thought to myself, “Oy, now I have to wait another 3.27 minutes.”

Out of the building and into the clear blue sky, the only thing separating me from “Nine-O-Nine” was the beautiful silver P-51 and about 50 yards of open tarmac. After a brief discussion with several of the pilots, my prize was just a few heartbeats away. As I approached her I had to stop, marvel at her functional beauty and ponder her very existence. Why was she born at all? What was her real purpose? What was her role in helping to defend this great democratic republic we live in today? Do people realize she was just as deadly as she is beautiful? My mind could not help but wander to the dark days of WWII when Nazi Germany looked unstoppable and most of Europe was under her crushing Teutonic boot.

After WWI, aviation technology began to blossom in earnest. Many military theorists began to speculate that an enemy country could be defeated through aerial bombardment alone. To this end, many industrialized countries built bomber aircraft for that role. In the US, many bombers were built and to be honest, most of them stunk. It wasn’t until Boeing built the Model 299/ XB-17 in 1935 that the hallmark of a true thoroughbred was born. This machine matured rapidly and the newly coded YB-17 evolved through the B-17 E, F and culminated in the magnificent B-17G. Bristling with up to 13 .50 caliber machine guns, the B-17 wore her moniker “Flying Fortress” well. Worn torn and tested, the B-17 became the face of American airpower in WWII. It remains that face today.

When one stops to think of the contribution of the men who flew in this and other great airplanes over Europe during WWII, the numbers are truly staggering. During the war over Europe, American bombers dropped some 395,000 tons of bombs on Germany. In doing so, we lost 4,754 B-17s with their crews of 10 men and suffered a total of 174,238 casualties (deaths, PoWs, injuries). Few people realize the conditions in which these men had to fight their German counterparts. Flying in their unpressurized aircraft, at the altitudes they flew, the temperatures inside these bombers often dropped to -37 degrees. Men without hands, fingers, toes and noses, lost to frostbite, was a common sight on American bomber bases during the war.

When I watch shows on HBO like “The Pacific” or movies like “Flags of our Fathers” and “Letters From Iwo Jima,” I am reminded how brutal the war in the Pacific was and how hard the Marines had it. Not to demean the contributions of the Marines by any stretch, but few realize that although the Marines had 19,733 men killed, in the air war over Europe we lost 45,520 KIA. Some sources put Marine casualties at 31,986, 5.44 times less than that of the airmen. The battlefield in the skies over Europe was bloodier than the worst of Pacific battlefields.

I also often think about the young German pilots sent up daily to try and turn back the unstoppable American formations. One German pilot, Hans Phillip penned a letter four days before his death in October 1943 about attacking the American bombers. He wrote, “To fight against twenty Russians that want to have a bite of one, or also against Spitfires, is a joy. And one doesn’t know that life is not certain. But to curve into seventy Fortresses (B-17s) lets all the sins of one’s life pass before one’s eyes.”1 A Luftwaffe pilot attacking a single Bomb Group of 21 B-17s, had to brave the defensive firepower of 273 machine guns. One German pilot wrote that attacking an American formation was like trying to have sex with a porcupine and not getting stuck.

It was with these and dozens of other thoughts that filled my mind as I approached this most magnificent and timeless of women. To look at her, to touch her and to smell her was to put me into the skies with those young men who fought, died and won the war so many years ago. I can only hope that groups like the Collings Foundation will continue to do what they do. They tour the entire country every year, bringing this living history for all of us to enjoy. The next time they come to Montgomery, I suggest as many of you as possible come out to see these magnificent machines. Although I doubt many will share the same visceral response to them as do I, you will nonetheless see them for the wonderful history they represent.

My wife and I went back out on Thursday to watch them take-off. When I was talking with a couple of the pilots, they told me how I could become a member of the foundation and get checked out as a pilot on the B-17 and B-24. When I retire from Delta (if not sooner) and have time to dedicate to this cause, I will certainly be sitting in the cockpit, also presenting this great history to our younger generation. So until the next time they grace the skies of Montgomery, fly safely and Hals und Beinbruch.