Trump Leadership - One Is A Majority 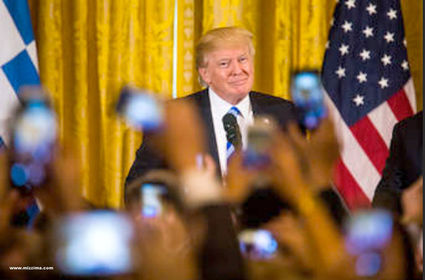 As a young 20 year old budding entrepreneur, I vigorously studied leadership. I was attracted to the vogue readings of the day on leadership, managing and goal setting. I learned that if you put 100 people in the room, 15 would emerge as leaders and only 3 will set goals and measure their success. My greatest lessons were real life examples of watching the management style of others. After years of observation, I deduced that true leadership is recognizing the ability to execute alone and one being the majority. So when you pause and contemplate management, people are starving for leadership and 3 out of 100 have it to offer.

I was so fortunate in our family business to travel to several continents and interface with some very wealthy people. Some of these were self-made and some were heirs who built on their benefactor’s success. I also had the privilege of working for two Republican Governors; Hunt and James. One of my assignments was being the liaison for Governor Hunt to the Southern Growth Policies Board made up of 13 governors from southeastern states including Puerto Rico. This interface exposed me to the governors of each of these states. I also had the privilege of working with members of congress and the White House on public policy issues. Little did I know over this expedition of wonderful experiences, I attended the school of leadership on these very capable leaders!

I am reluctant to point out just one illustration, but to give justice to all of these experiences of leadership would require a book written. That being said, allow me to discuss for minute Governor Fob James. Governor James knew his constitutional role of the executive branch and how it balanced within the separation of powers doctrine. He knew the power of the chair and masterfully executed it with great authority, even when he stood alone. He also taught me without saying, that one is a majority. Governor James examples are too numerous to recount, but he taught me so much by his daily actions about being a fearless leader. On a side note, I was there the day he left the capitol on his last official work day in 1999, before descending down the famous George Wallace elevator; he turned around and saluted his chair, as if to sign off and pay his final respect to the office. Awesome and sobering!

I carried his mark of leadership brand on me into the Christian Coalition efforts in the state beginning in 1999. I rapidly saw how hostile, win at all cost our opponents were on issues we supported or opposed. We were involved in some very explosive high profile issues in the state like promoting pro-life legislation, preserving traditional marriage, protecting our young people and communities from the expansion of gambling and pornography, reducing taxes on the family, promoting choice in education, keeping the Ten Commandments in the Alabama Judicial building and so much more. Some might say this is a pretty fiery list. Over the course of these years we found our organization going head to head in high profile statewide skirmishes opposing two governors and the well-financed gambling magnates of the state. I thought about Governor James often during these lonely fights. What I have noticed over time is folks will follow a leader into the fires of battle, if their cause is pure, factual and on the moral right side of history.

Let’s talk about Trump. Trump developed over time in business how to quickly read people and measure their high water mark or breaking point. While being a firm believer in free trade, Trump was willing to walk out on the plank and impose short term tariffs in order to level the playing field. He was not one to pass money under the table so paying rogues leaders’ large sums of cash to tone it down was NOT going to happen. In this Iranian situation, he went into this on the offense, not defense. If you listen to the media as a whole and the democrats; they are coming from a position of weakness and playing defense. This is why we maintain world peace through military strength, only to use it if necessary. Bottom line, we are on offense. Iran needs to worry about the Big Mule and forget about those 70 virgins, because if you press this President, he knows how to swing a 2 x 4.

Have you noticed how others have emerged in this environment of fearless leadership? Did you notice ole cranky McConnell during the Kavanagh hearings, he did not flinch. How about Lindsey Graham, I actually look forward to his interviews now and used to find it hard to digest his McCain induced thinking. He became a hero during the Kavanagh hearings and has emerged as one of our best GOP weapons. Look at the house during impeachment, can you believe our fearless team emerging; Kevin McCarthy, Devin Nunes, Doug Collins, Jim Jordan, Mark Meadows and so many more. We now have a trained fearless battalion in the U.S. House of Representatives ready to lead after we win back the house in 2020. Proving my point, Trump walks ahead of the troops into the fire, others are empowered to follow.

When I interview candidates running for office, I often find after being elected, there are so few who understand this principle, but to the contrary, looking to appease and the next election. I always tell them to remember one thing; there will come a day when you will face a very tough issue, be willing to stand alone in the wake of all the noise. Learn from Trump, one is a majority, others will eventually follow.

In the Apostle Paul’s letters to the Ephesians, he stated in Chapter 6, verse 13, "Therefore put on the full armor of God, so that when the day of evil comes, you may be able to stand your ground, and after you have done everything to stand, stand."

One is a majority, find what is right and do not move.