The Silence of the pigskins 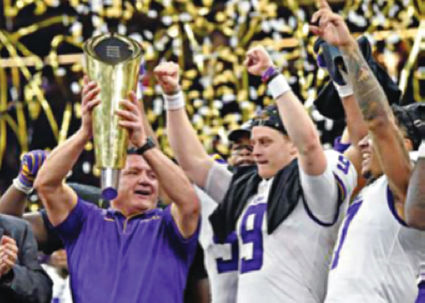 Do you miss it yet? College Football, and not just any College Football; I’m talking SEC Football. I sure enjoyed this past season, savoring all the games; well almost. Our SEC teams achieved many accomplishments during the 2019 season; with LSU doing their part, ultimately producing a National Championship. Not bad for coach Orgeron; the coach with whom many doubters resided. Those LSU Tigers beat the tar out of every-body in the SEC, as well as everyone else on their schedule. They finished the season putting a beat down on Oklahoma, on the way to the BCS Championship game against Clemson. Clemson was a worthy opponent for a minute, the Joe Burrow show and Crew gave Clemson another taste of SEC Football; besting those “other” Tigers 42 to 25.

While I can’t compare ESPN and Fox Sports to CNN and MSN; I sure heard a whole lot about how Ohio State was the best team in the country. I certainly can’t speak for any-one but myself, but I heard way too much about the Ohio State Buckeyes.

Another one of the talking heads decided that the PAC 12 teams were going to make run at the championship game. As I remember it, one of their darlings was Washington; the other preferred team they touted was Oregon. You remember Oregon, the team those Auburn Tigers beat in the last seconds of the game 27-21. Auburn outscored them in the second half 21-7. Oregon finished the season 12-2 as you might recall, or perhaps not. In the six years of the BCS Championships SEC teams have been in all 6 of them and have won three of the six Championships.

The SEC is all about championships, I attended the first SEC Championship game in Birmingham with my son David. That was on a freezing cold night at Legion Field with Alabama pulling out a win in a tough fought game against Florida. Bama won 28 to 21, scoring near the very end of the fourth quarter. Coach Steve Spurrier was in fine fashion that night, I lost count of how many times he threw his cap on the ground. Coach Stallings and the boys rolled into the National Championship Game at 12-0 as decided under dogs, and beat a Good Miami team 34-13. My favorite quote from that game was “I waxed the dude”; George Teague number 13, after taking the ball away from Lamar Thomas, Miami’s star wide receiver.

And who can ever forget the 2010 Auburn Tigers National Championship victory over Oregon 22-19. In was toe to toe trench warfare for 60 minutes. Auburn went 14-0 that season, capped by the Oregon win. As we all remember the difference maker in that game was Cam Newton, or superman as I referred to him. And remember, for Auburn to get there, they had to overcome a 24-0 deficit in Tuscaloosa, pulling it out 28-27.

Of the 14 teams in the SEC, 8 had winning records at the end of the 2019 season. A Notable under achiever was Texas A&M finishing at 8-5. In their opener they faced UCLA, losing that game by taking a 44 to 17 lead into the fourth quarter and then allow-ing the Bruins to put up four touchdowns to beat them 45-44. I must comment that with Head Coach Jimbo Fisher on board, and all the brain damage that went with his hiring, we should have seen a better than 8 and 5 record out of the Aggies.

I’m not going to call Alabama an underachiever with a 12-2 record. However, one won-ders what might have happened had their usual ferocious and dominating defense been present during the 2019 season. Certainly, that coupled with the new quick strike of-fense would have made their season very interesting indeed.

Equally, Tennessee would have to be considered an overachiever this season at 8-5. They finished third in the east behind Georgia and Florida and made lots improvement during their final 4 games, after an embarrassing loss to Georgia State.

And then we have The Auburn Tigers. I watched every minute of every game the Tigers played. And yes they played the toughest schedule in college football in my opinion. Who else played the likes of Oregon, LSU, Florida, Georgia and Alabama in a single season. No one in recent history that comes to mind. As a side note, who does the scheduling over there? Just thinking …. They finished third at 9-4 in the SEC West be-hind LSU and Alabama. They are one of my over achievers; in spite of an abysmal Bowl appearance against the Golden Gophers of Minnesota. Playing a true freshman quar-terback, an injured running back and some self inducted errors, the Tigers have to get a big thumbs up here.

Soon the anticipation of college football around these parts will begin to build. While Auburn has bragging rights this year, you know the Bama faithful are counting the days until the Tigers return to Tuscaloosa. I believe we will watch with curiosity how Ole Miss begins to rebuild its program with Lane Kiffin at the helm. He has enough experience to be a SEC head coach, it should be fascinating to watch.

An important perspective is that we live right in the middle of the SEC nation and hope-fully the football fans, which are many of us, can enjoy each one of the games, no mat-ter who your favorite team is. Unless of course, its game day for Your Team! It's a far cry from my old days of listening to Pick of Dixie on the AM radio back in the 70’’s. Walking around in my backyard on a Saturday night trying to catch the weak AM signal on my radio. We as football fans sure have it good these days, every game that every SEC team plays is televised in some form or fashion. I never imagined growing up that we’d be able to do this or that it would even be possible.

Remember, Nothing too good nor nothing too bad last too long. So Enjoy.