The hay is back in the barn: Legendary band director, composer and musician dead at 94 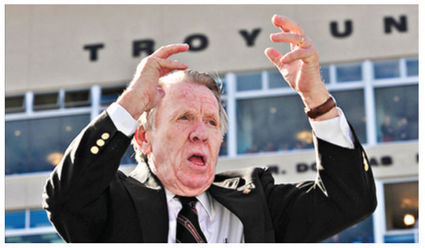 Troy University has lost a legend. Dr. Johnny M. Long passed away at his home on Monday evening at age 94 after a brief illness and more than a year of declining health.

"Dr. Johnny Long has been an icon of Troy University and band music throughout the world. His leadership, not only of the Sound of the South Marching Band and the University but also to generations of musicians, conductors and music educators across the globe, has made a significant impact in bringing our world and our cultures closer together," said Chancellor Dr. Jack Hawkins, Jr. "He promoted the very best in his students, in music and in understanding of our world. His death leaves a void in leadership in many areas, and his friendship will be deeply missed."

Dr. Long, who served as director of bands at TROY from 1965-1996, was a past president of the American Bandmasters Association and is a member of the National Band Association's Hall of Fame of Distinguished Band Conductors and the Alabama Bandmasters Hall of Fame. In 2010, Dr. Long was named honorary president of the National Band Association, and in 2011, was the subject of a feature piece for CBS Evening News on his continued involvement as conductor of the Southeast Alabama Community Band. In 2012, he was elected Honorary Life Member of the American Bandmasters Association.

He continued to serve the University as Director of Bands Emeritus and Professor of Music Emeritus.

A native of Guntersville, Dr. Long was a member of Omicron Delta Kappa honor society, Phi Delta Kappa, Kappa Kappa Psi honorary band fraternity, Phi Mu Alpha, Delta Chi fraternity and Phi Eta Sigma. He was an active guest conductor, speaker, clinician and adjudicator through the United States, Europe, Canada and Mexico. In 2005, he was honored by the Alabama Music Educators Association with its Barbara Odom Award for lifetime achievements in music education, and holds the Distinguished Eagle Scout Award from the National Eagle Scout Association.

During his 31-year career at TROY, Dr. Long also served the University in various capacities, including chair of the music department, dean of the School of Arts and Sciences and dean of the School of Fine Arts. Two buildings on the Troy Campus bear his name – John Maloy Long Hall and the Hawkins-Adams-Long Hall of Honor, which houses the NBA's Hall of Fame.

Under his direction, the University's "Sound of the South" marching band represented the state in two presidential inaugural parades (Nixon and Reagan) and served as the official band for two presidential visits to Alabama.

"Dr. John M. Long was the Director of Bands from 1965 – 1996. During that time, he built the band program into one of national prominence and quality. He has produced thousands of band directors and musicians who have gone on to careers throughout the United States in all areas of music and music education," said Director of Bands Dr. Mark Walker.

"Dr. Long loved his students, family, friends, and Troy University. His influence is evident in band directors throughout the country. He will be sorely missed and forever remembered," he said.

He served in the U.S. Army as a bandsman in World War II, serving in Iraq, Egypt and elsewhere in the Middle East.