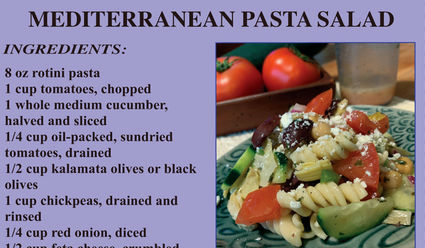 It is difficult not to comment on what is going on in the world today. First, the news is changing and updating so fast you cannot keep up. The vocabulary of everyday conversations includes phrases such as "self-quarantine" and "social distancing." What happened to the times when the only social distancing was to keep away from Aunt Eunice? She would coral you in a corner at Thanksgiving and ask why you are not married and why are you not going to become a doctor. She knows someone at the bank that has a daughter that you should call.

There is a Quarantine Cooking Show on YouTube, to make the most from your pantry. The news to pay attention to is how to protect yourself and your family. There are many plans to protect people and some of those plans contradict someone else's plan. Sadly, some of the plans introduced are only developed to further along someone's political agenda. Some people are not thinking

rationally and panic buying. This has caused shortages of some staples in many grocery stores.

I write this article to tell the story of Southern Cuisine; how to cook it, and learn the history about the foods we eat. In addition, I give you tips and ways to save time and money in your food purchases and menus. Also, to introduce you to some new recipes and menus to hone your culinary skills. And in times like these we could be thankful that we set up a well-stocked pantry.

The pantry would limit the times you needed to venture to the grocery store only to find that the items you wanted are not in stock. You cannot go out to a restaurant. Not that they will have no food to eat, but sadly, because you want to limit your exposure to other people. Fast food restaurants are closing their dining rooms but still have their drive-thru open. Besides, I do not know of very many restaurants that make their cornbread in a cast iron pan with a hefty dollop of bacon drippings (in the pan and in the batter). The stocked pantry will allow you to do just that while making your self-quarantine much more bearable. But this month's article is not about that.

We have lived through a wet and cold winter. I think every winter is too wet and too cold. Winter is the time we eat hearty and filling meals. Lots of stews, thick soups and calorie-laden casseroles. Also, the calendar says we just left what I call the feast season. Christmas and Thanksgiving contributing greatly to the hardy and filling meals and to the bounty of leftovers to snack on. Those meals serve their purpose during the cold days of winter. But Spring is here and the available fruits and vegetables have multiplied. It is time to lighten up on your calorie intake. Enjoy the bounty from the farms that dot the landscape of Alabama.

April has a day just for you to make a peach cobbler, eat some BLTs, enjoy fresh tomatoes, add more pecans to your menu, surprise your significant other with an Egg's Benedict for breakfast, add mushrooms to your pigs-in-a-blanket and have it all on April 23rd, National Picnic Day.

This recipe has a combination of ingredients including kalamata olives, sun-dried tomatoes, pasta and chickpeas that warrant it to be called Mediterranean. This Mediterranean Pasta Salad recipe is filled with fresh veggies and pantry items. Top it with a homemade Greek dressing.

2. Combine dressing ingredients in a jar with a tight-fitting lid & shake

4. Refrigerate at least 1 hour before serving.

Notes: Scrub the cucumber well to remove waxy coating. I do not like to peel a cucumber but before I cut it I to run the tines of a fork down the cucumber to score the skin. A garden pasta variety will give the salad some color but will not impart much flavor. Do not be cheap with the feta cheese. It should be white with a tangy flavor and rich aroma. It should not taste bitter, sour, chalky or tasteless. I like to buy feta in a block and crumble what I need. Also, this recipe calls for a cup of chopped tomatoes. Sun-dried tomatoes can be substituted but do not use a whole cup as the recipe calls for. Thinly slice the sun-dried tomatoes in strips and add a third cup of a cup at the most, a quarter cup will do.

The next salad, Jicama Salad, is a light contrast to meals that are spicy and heavy. Jicama can be found in most larger grocery stores and in stores that specialize in Mexican cuisine. The vegetables can be found all over Alabama. A variation of this salad was a favorite of mine to use as a topping to an artichoke bottom. Omitting the cuties and the cucumber, doubling the jalapeños and finely chopping all of the ingredients, will produce an attractive and delicious hors d'oeuvre.

I was watching a cooking show, but I do not remember which one. I did write down the instructions to make these delicious hors d'oeuvres. I was thinking of using these morsels of goodness as a substitute for sun-dried tomatoes. Set your oven for 325 degrees. Look in your pantry for a can of whole peeled Roma tomatoes. Drain well but keep the juice for a later meal. Slice the tomatoes in half length wise. Separate a bunch of unpeeled garlic but do not peel. Cover a sheet pan with parchment paper. Lay out the tomatoes on the parchment paper and scatter the garlic cloves around the pan. Drizzle olive oil over the tomatoes and garlic and lightly salt and pepper the pan. After about 90 minutes, remove pan and when cool enough to handle, squeeze the garlic clove out of their skin onto a tomato slice. Roll it up and place in mouth!! You can also slice the tomatoes for later use and save the garlic but it is more fun eating them nice and warm with your favorite fermented red grape liquid. Make the most out of your self-quarantine!

For the final salad to celebrate spring, Corn & Black Bean Salad, I use this recipe because it has a multitude of variations and uses. When I am through with it as a salad, I add a spicy salsa and enjoy with corn chips. Then with what is left, I drain it and with plenty of cheese the mix makes great nachos.

1 can of black beans, rinsed & drained 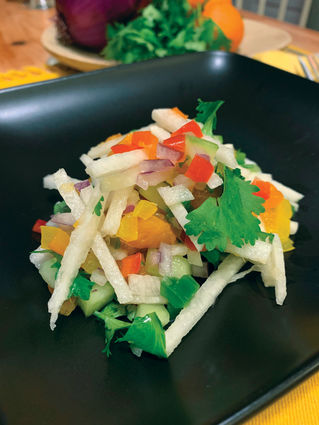 1/2 teaspoon each, salt and pepper

1. Wisk the lime juice, olive oil, cumin and salt and pepper together or put

in a mason jar with lid and shake until combined.

2. Place all of the veggies in a large bowl, add dressing and toss to coat.

A final word about the state of things. Huffington Post even has an article on How to Prioritize your Pantry and Make Food Last Longer. Costco will not take returns of toilet paper, Alabama.