Down the Street Delivers to Essential Workers! 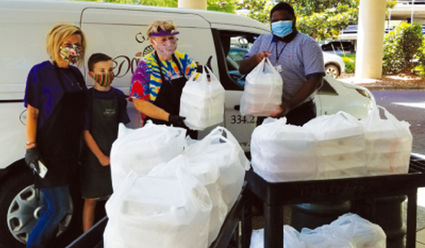 Gail Royal, owner of Down the Street Café on Zelda Road in Montgomery, has been providing meals to essential workers. On Wednesday, May 6, Gail, her daughter Jamie and 9-year-old grandson, Caleb, helped deliver 100 plates of food for the staff at Jackson’s Hospital that included pulled pork, baked beans, potato salad, light bread, pound cake and tea. Down the Street has been cooking Boston butts, slabs of ribs, and chicken halves, which are sold to the public in order to help raise the funds to feed staff in all three hospitals in the Montgomery area during the Pandemic. Baptist South also received plates this past month with Baptist East scheduled to receive plates this month. Gail wants to show the community’s appreciation to these workers, and also thanks the public for its continued support.