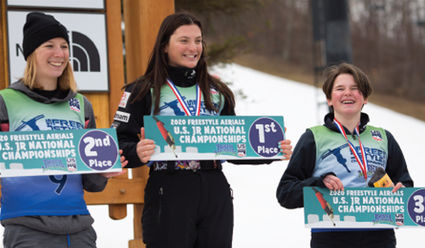 Dani (Karyl) Loeb, the daughter of Ricky and Jamie Loeb of Montgomery, Ala., has been recognized as the newest member of the U.S. Aerial National Team for the years 2020-2022. The nomination was officially announced on May 7, 2020 by the U.S. Ski and Snowboard Association. Dani was born in Montgomery and raised on a farm in the community of Pintala. “She has always been energetic,” her mom says. “Her dad and I put her in gymnastics at United Gymstars and Cheer at a young age because all she wanted to do was flip and twist.” When Dani was 12, the family moved to Coppell, Texas, where she trained at Texas Dreams Gymnastics. It was here that the recruiter from the U.S. Aerial Team noticed Dani’s ability. The sport of Aerials combines gymnastics and skiing; two things Dani loves.

She attended the talent identity camp in Lake Placid, N.Y., made the development team, and never looked back. Dani lived with 11 other athletes from all over the United States at the Olympic Training Center in Lake Placid for two years before her move to train in Park City, Utah, the official training site for the National Team.

The road to the National Team has had ups and downs. Dani spent the first year of development learning how to ski. The next year, she had significant finishes such as third place Junior Nationals and second U.S. Nationals. Dani also finished top American female in the Last World Cup before the 2018 Olympics in Pyeong-chang, South Korea. Last year Dani had a minor knee injury causing a setback in training. Still, she closed the year hard, and while in Valmalenco, Italy, she became the first American to win a European Cup.

Dani returned to Park City, Utah, and rehabbed and trained intensely. With the help and support of her coaches Jack Boyczuk and Jana Johnson, she had a great year competing in the North American Tour. She podiumed seven times this past season, accumulating four silvers, two golds, and a win at Junior Nationals. Dani earned a spot once again to compete for the U.S. in Junior Worlds, but unfortunately, the season was cut short because of COVID-19.

As a result of a Top 30 World rank and being the fourth-ranked U.S. female Aerial Athlete, Dani was awarded a spot on the U.S. Team. Dani received a two-year nomination that will guarantee her a spot on the National team through the 2022 Olympics. (Although this does not secure her a spot on the Olympic team.)

For the time being, Dani is spending time at her home on Lake Martin. She is also delivering lunches with a great group of volunteers for Wetumpka Middle School. “I get to ride a school bus and provide lunches for kids who may be missing that meal every day. It is such a wonderful feeling to see the smiling faces.

“I am so overwhelmed by the support I have been getting from everyone. I want to thank you all for the kind words. I will do my best to make Alabama Proud!”